The semester is rolling on, and all of the things that seemed so far away in January are now here.  In some ways this is good - some of those things are exciting and good things - but in some ways it's not so good - some of the things that need to be done aren't done at all.  I think this must be pretty normal (at least, I tell myself that it's pretty normal - I can't be the only one?).

I am still finding time to knit and spin, though.  I have now completed the body of Vitamin D and will be on to the sleeves soon enough.  However, as I cast the body off, it suddenly occurred to me that I have had plans to knit a shawl for a young woman of my acquaintance, a young woman who (just yesterday, it seems) used to babysit the girls (in fact, it just hit me that when she started babysitting the girls, she was about the same age that Older Daughter is now) - and now she's graduating from UC Berkeley.  How cool is that?  I asked her mother, a friend of mine, when graduation is, and she said it's in early May.  Eek!  So I have cast on for Whipporwill, in very much the same colors as the one I knitted for myself, and I will dedicate myself to that for the foreseeable future.  It may not be done in time for her mother to bring it to graduation, but it will be done by the time she moves back down here.

I have also begun sampling more fiber.  This is the Brown Merino from my fiber sample box. 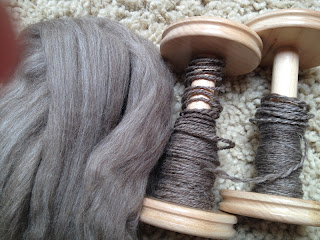 I split the ounce of fiber in half.  The goal is to spin one half into a worsted two-ply and three-ply, and the other half into a woolen two-ply and three-ply.  Above is the worsted, three-ply on the left, two-ply on the right. I think you can see just how much rounder the three-ply is.  This is some gorgeous fiber, although with more in the way of coarser, darker hair scattered throughout than I'd expected.  Some of it shook out, some of it was incorporated into the yarn.  I will be interested to see, once these are made into skeinlets and washed, whether it is possible to feel those coarser hairs, and whether they change the range of garments for which I might consider this particular merino.

I have hopes of spinning up the other half tonight (since I'll be spinning woolen, it will go faster), but I have something else to do.  Tomorrow morning, bright (actually dark) and early, the girls will be leaving for New York City for this year's Montessori Model UN meeting.  Younger Daughter did this last year, but it is Older Daughter's first year, and they are both so excited that I know absolutely that they will not be sleeping tonight.  Last Wednesday, we went to hear them practice giving their speeches, which was very exciting for us as parents.  The issues that students in their group (they are delegates from Romania) have to address are varied, ranging from child soldiers to the conflict between Palestine and Israel over heritage sites.  The fact that they have the opportunity to think about these things, and then to discuss possible solutions to these issues with their peers, is amazing enough.  The fact that they then have an opportunity to hear the final resolutions of all of the working groups read out loud on the floor of the General Assembly of the United Nations - well.  That just gives me chills.  Those resolutions which pass are then (I kid you not) forwarded to Ban Ki-moon.

There is no greater gift to give a child, I think, than to give her a sense of herself as a member of a broader citizenry, and of herself as able to participate in change for the better.  I hope this is something that both girls carry with them.

On a smaller, but, I think, equally exciting note (to Younger Daughter, at least), each school that participates must forward a design for this year's conference T-shirt.  The design for the T-shirt is then chosen by the organizers from among the hundreds that are submitted.  This year, their program sent forward a design that Younger Daughter and a classmate from the program designed together. 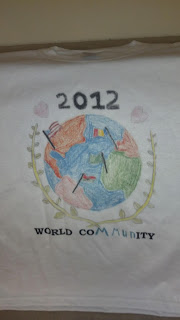 And the organizers chose it.
Posted by Knitting Linguist at 3:53 PM 12 comments:

The weather just can't seem to settle down here.  Last weekend, I spent every minute I could on the back patio, spinning and knitting.  But then, much of the week was gray and stormy - lots of wind and very wet rain (I don't care what anyone says, some rain is just wetter than other rain).  And yesterday, when I went to La Jolla after dropping Older Daughter off at a workshop, it was blustery and cold and the ocean was very big (I don't care what anyone says about that, either - sometimes the ocean is bigger than usual). 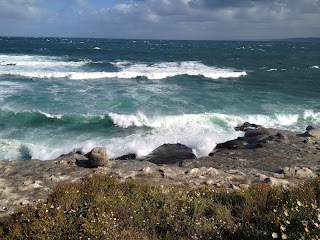 See what I mean?  And look at those colors!  Seafoam green, a lovely deep blue-green, froth; all looking ice-cold and whitecaps everywhere. 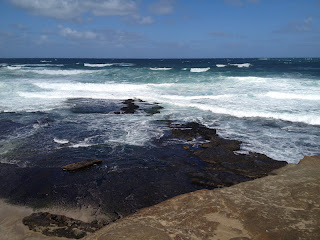 Those are the colors I'd wear all the time, and surround myself with, if I could.  Cold beaches.  Yup.

It was so cold, even the pelicans weren't doing much in the way of flying. 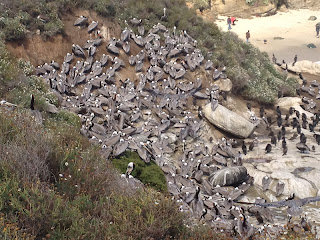 Look at them all. 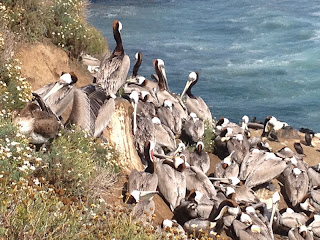 So ungainly and dignified at the same time.

So I walked along the shore, watching everyone else, all bundled up, walking along at the same time.  I particularly enjoyed all the parents out with young children, following them along in their boundless energy, heedless of the cold.  I remember exactly what that was like, walking with Older Daughter along the Marina in San Francisco, with Rick's grandmother - as if it were yesterday.  And it struck me suddenly: it does feel like yesterday, but there I was, having just dropped my daughter off at a workshop on seismic engineering at UCSD.  And as inarticulate and dorky as it sounds, all I could think was:

When did that happen?  I remember so clearly what it was like when she was barely walking.  Heck, let's be fair - I remember what it was like to be 14, and nervous and scared and doing something new with people I didn't know.  Isn't it odd to carry all of these people inside - each of them an iteration of "me"?

I guess cold ocean air messes with my brain. 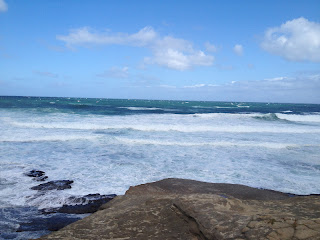 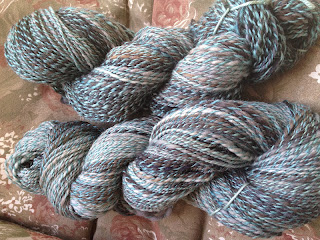 The colors in that yarn are actually more saturated than they look in that picture - and are rather like the beach pictures above (the light and dark browns even look like the pelicans).  I think I should call it "cold beach", in fact.  I still don't know what I'm going to make with it, but in the meantime, I did want to show some finished pictures which illustrate that, once dry, it turns out that this yarn did what I'd hoped: the woolen-spun singles puffed out around the worsted-spun singles in quite a nice way. 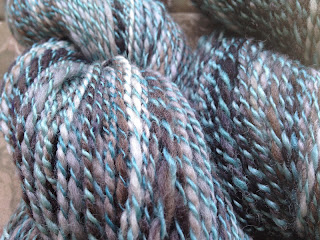 (The woolen-spun Polwarth singles are the brown-y colors, and the worsted-spun BFL singles are the blue-y ones.)  I'm so pleased that this did what I thought it would do, and did it nicely, to boot.  Overall, the skeins of yarn handle like woolen-spun yarn - very light, and with a lot of bounce and much less drape.  It will be interesting to see how they knit up.

I've been doing some sampling today on my wheel, but I will write more about that next time.  I've also been knitting away on Vitamin D: 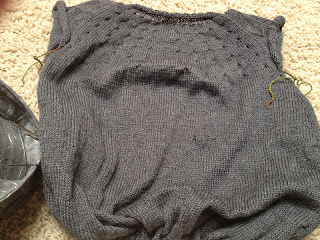 I am nearly done with the body.  I just need to cast off, then pick up stitches around the fronts and neck to knit a few garter stitch ridges.  Then it's on to the sleeves.  I'd hoped to knit this as a long-sleeved cardi (it's designed to be 3/4 sleeves), but I'm shorter on yarn than I'd thought.  So now I'm thinking I might do elbow-length sleeves, which could make this a nice transitional piece.  We shall see how it goes.  Once I'm done with the body, I'll weigh the yarn and then see how far that goes on the first sleeve.  I'm not always fond of 3/4 sleeves, so if it looks like I won't make it to my wrists, I'll probably go elbow-length instead.  Ah, the joys of managing yarn supply. 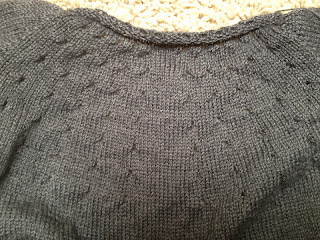 I rather like the radial increases on the yoke; they also are used to make the front panels swingy.  I'm tempted, should I make this an elbow-length sleeve, to do something similar towards the end of the sleeve, to make them a little bell-like.  Again, time will tell.

Meanwhile, dark and stormy seas aside,  I came home to find that Rick had bought these at the farmer's market.  It's clearly spring somewhere! 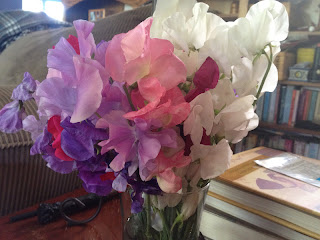 I have finished the spinning that has been languishing on my wheel - hooray!  It took a seriously concerted effort (man, those worsted singles were taking forEVer to get through), but it was such a lovely day today that I installed myself on the back patio, audiobook in ear, and got through the rest of the BFL singles, and then plied everything together.

I ended up with two very full bobbins. 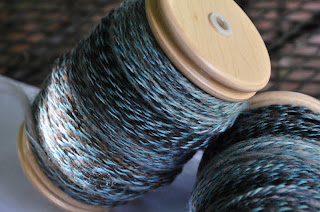 Just as a reminder, this is four ounces of Polwarth and four ounces of BFL (the Polwarth is the browny-grey fiber, the BFL is the bluey-greeny fiber), dyed by the inestimable Erica at DesigKnits.  I spun the Polwarth woolen and the BFL worsted, and plied them together. 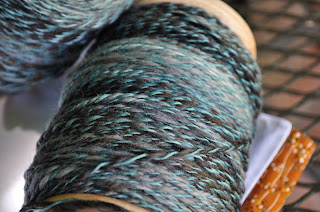 I like the way these colors came together even more than I'd thought I would.  I knew they'd come over barber-poled, and wasn't sure what I'd think of that, but I think I like it.  I am a bit worried that I may have underplied it, but we'll see how it comes out after its wash. 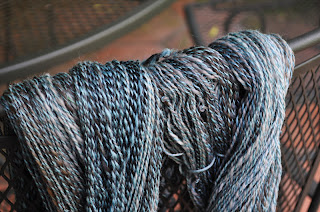 That's a little bleached out, but it looks like the colors on a cold beach to me, all seafoam green and dark cobbles and bleached wood. 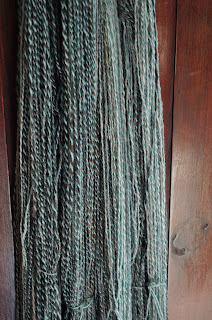 I washed it in hot water, and treated it pretty vigorously: I kneaded it around, squeezed it out, and snapped it with great energy.  Now it just needs to dry. 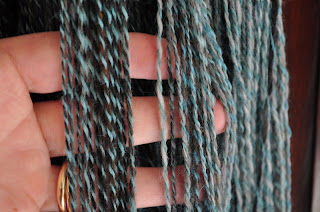