The plan was to post last Sunday, but life (in the form of a car key lost down the toilet at De Anza Cove at 6:50 am just prior to an 8-mile racewalk workout, necessitating a long train ride home - after the eight miles - and a return trip to fetch the car with an actual key) got in the way.  Weeks right now are so crazed (in no small part because Older Daughter - at 15 still licenseless, but with her permit test scheduled for a week from tommorrow - is currently taking French two nights a week at the local community college, and is participating in a project to build and send a micro-lab to the International Space Station one night at week at UCSD; there is much driving these days), so there's no squeezing blog space out of the week.  And this weekend was San Diego's first Yarn Crawl!
Unlike my friend Marie, I knew I wouldn't be able to visit all of the stores on the list, but we did manage to skip out early on Friday to make the 40+-mile drive to Ramona to go to an alpaca farm (you can't go wrong with alpaca, I say, even if you have to do some washboard dirt driving to get there). 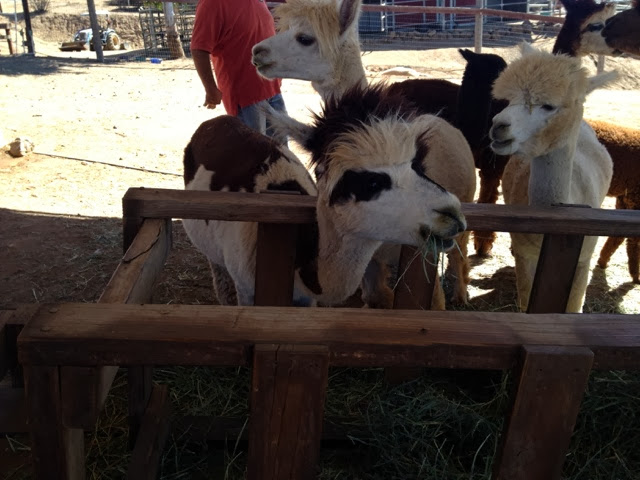 This guy had the best topknot ever.
And - to my very great excitement, the Yarnover Truck was there! 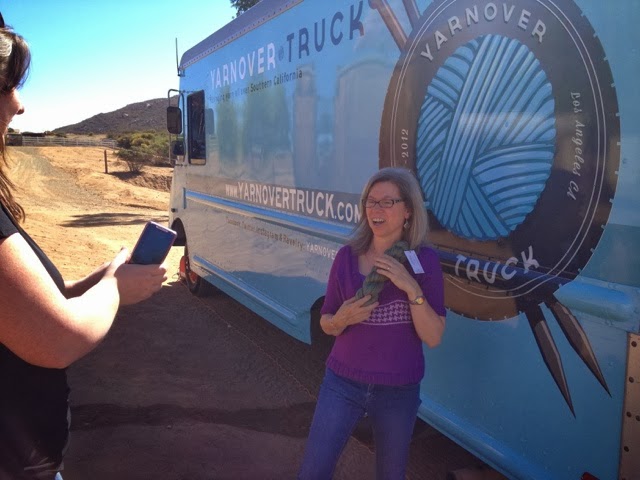 I was amazed at how much yarn they pack into such a small space (if you find them on FB or Instagram, they've got great photos).  And as you can see, they were totally accomodating about little things like trying the yarn on to see what colors are best (as my friend Marie is doing here).  Can you tell I look happy? 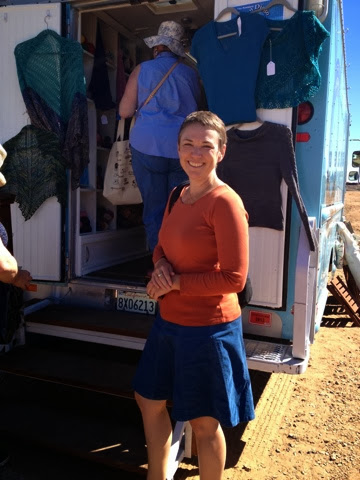 I got some lovely yarn there - two skeins of IndigoFirefly (in the colorway 20,000 Lawyers Under The Sea) to make the Side Impact Sweater, and one skein in the colorway Tardis to make socks for Dr. Who-obsessed Older Daughter (OK, I admit it, she's got me hooked, too - just made it through Season 1 of the most recent seasons, and now think Christopher Eccleston is even hotter than Daniel Craig).
The Side Impact Sweater is excitingly fabulous, and I have already swatched. 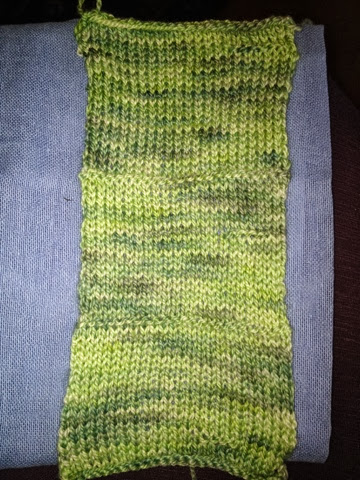 That's not the best representation of the color, which is more in the seafoam green range, but it has a lovely hand. I just need to decide which needle size I like best for it (the range there is from 6-4, top to bottom), and then do the math to make sure I choose the right size.
On Saturday, I wove for four hours at my very own LYS, Yarning For You, and got to talk to an amazing array of weavers and spinners, as well as knitters, from as far away as San Fernando - that's several hours of driving each way, for you non-SoCal folks.  Then Deb (YFY's fabulous owner) and I were sheep together. 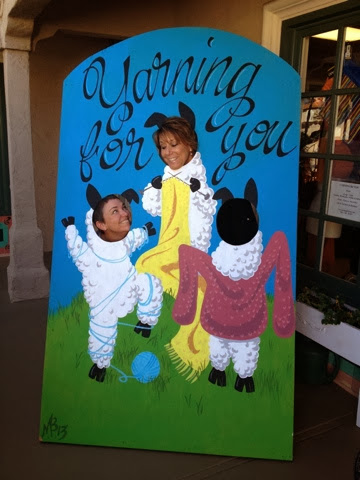 Today was the last day, and on the way home from meeting up with the racewalking group for walking and kayaking (more on that momentarily), I swung by Black Sheep and Common Threads, both in Encinitas.  While I did get some yarn in both places (that's for another post), I also made a donation: 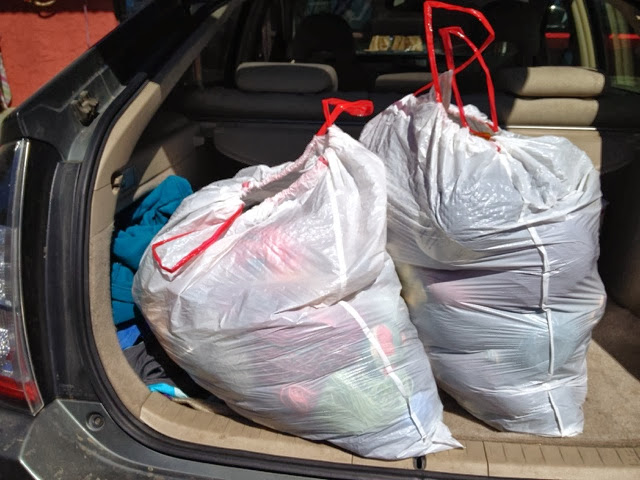 Those two bags have been sitting in my den since the Great Yarn Stash Toss of 2013, waiting for me to figure out where to donate them.  Black Sheep was collecting yarn for several charities, among them a shelter for women leaving violent situations, and that's where those two bags are going.
And then home again, to work on a project that I'd like to get off the needles before casting on any more (not least because I could use those size six needles).  And, less happily, to ice my calf, which I appear to have strained pretty badly.  Not walking, but (get this), by jogging to my car to grab something I'd forgotten before starting out.  Can you believe?  Going along, pushed off with my right foot to jump off the curb, and then, pop - and really not nice pain.  Sigh.  I got through the walk (slowly), and kayaking afterwards was fine, but I'm hurting pretty badly when I try to walk, so, as you can see, it's ice and elevation and knitting for me. 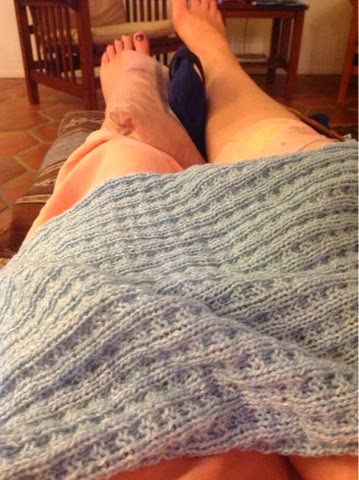 (That's the Jade Sapphire Sylph Cowl, out of Jade Sapphire Sylph - naturally.  Boring, but I think I'm going to like wearing it when it's done.)
So that's where my weekend went!  Next week (I hope), an update on Bohus knitting, which proceeds, and maybe some FOs.  I've also been hitting the trail, and admiring the sepia shades of fall - I probably won't be wallking much this week, but we'll see...
Posted by Knitting Linguist at 7:27 PM 5 comments:

Wow.  It's been almost exactly four months since I posted.  On the one hand, it feels like it's been forever, so four months makes sense; on the other hand, it just doesn't feel that long, somehow, probably because the time has been very full.

To give you a brief idea.  We travelled. 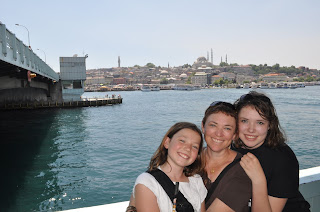 Yes, that's looking across the Golden Horn to Sultanahmet.  In Istanbul.  Yes, we were in Turkey during the unrest.  No, we didn't run into any trouble.  Yes, we ended up driving down into the southeast of Turkey, into Mesopotamia (!!), to about fifty miles north of Syria (yes, driving in Turkey is quite an adventure).  No, still didn't run into any trouble.  Yes, it was an amazing experience.  Yes, I'll definitely write more about it in a post that isn't of the catch-up sort - it's worth some discussion. 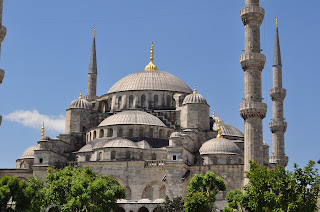 The Blue Mosque. I absolutely fell in love with the muscular grace of mosque architecture.  There is something about the overlapping layers of domes that appeals to me deeply. 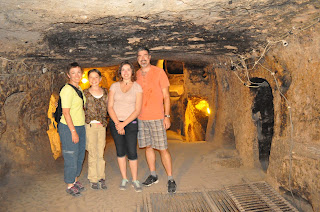 We visited very old underground cities in Cappadocia (clearly people were not as tall as Rick back then; actually, in Turkey, they mostly still aren't). 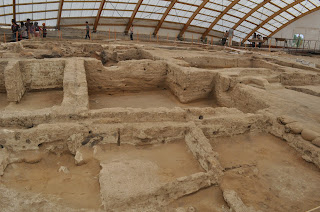 And even older Neolithic ruins (that's Catal Huyuk, 10,000 years old); you could see the scorch marks from people's cooking fires.  That absolutely floored me. 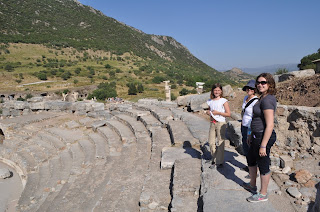 Ephesus.  Where I had a revelation when it suddenly hit me who those Ephesians were that Paul was always writing to.  Dude. 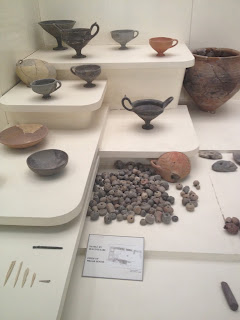 We saw very old Turkish spindle whorls (these are from early Troy). 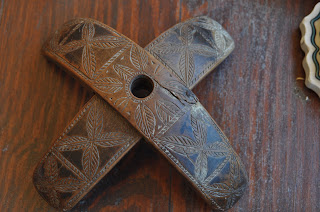 And less-old ones (this one's about fifty years old, and still in use, which is why it didn't come home with me).

We also went to Michigan, where we got to spend some wonderful time with family: my sister- and brother-in-law, and our niece.  I really treasure this time each summer that we've done it; I feel very lucky in my siblings-in-law.  This year, it was all about searching for waterfalls. 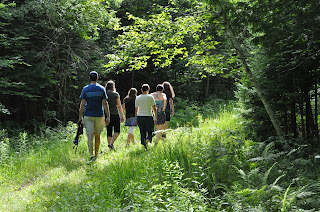 The cousins got to spend a lot of time together on the trail. 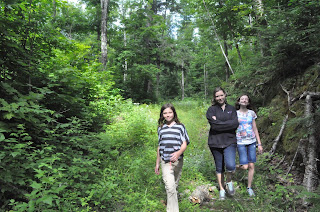 So did the grown-ups. 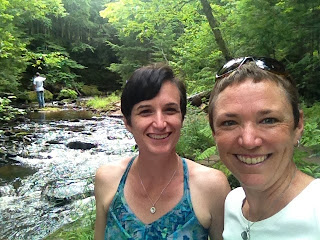 There was time for Uncle Geoff to try to teach the girls (and, I confess, me) how to skip stones. 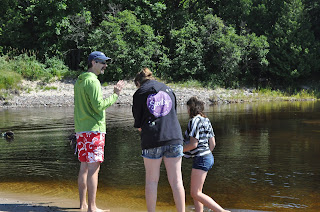 And, you know, the family that goes into underground mines together, stays together! 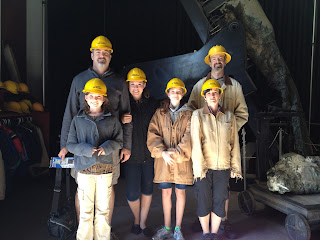 My last trip took me to Seattle, where I got to spend the weekend with a fabulous group of women, including Erica, and Ellen and Jan (the others are, sadly, blogless, but no less wonderful and amazing and inspiring to me in so many ways), under the tutelage of Susanna Hansson, studying Bohus sweaters.  That, too, is fodder for another post (especially as I am now the proud owner of one of the three Bohus sweater kits that I would like to own, and am getting ready to cast on the yoke; you will undoubtedly hear more about that in the coming weeks and months - and, one fears, years - than you might like), but meanwhile, a taste: 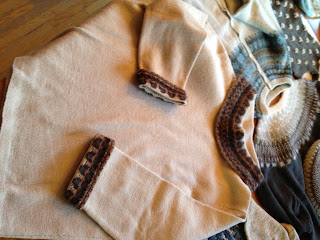 (I fell in love with the one in the foreground there; alas that it is not available as a kit.)


I did knit, among all of that, mostly things which involved a lot of stockinette, and about which I will post next time.  I also came to realize that this seems to be a pattern with me - this avoidance of the computer and, largely, the interwebs, during the summer.  My watchword for this summer has been "mindfulness", for many reasons, and one of the things that I was trying to do was to be mindful of what was going on with me, vis-a-vis the computer.  I have come to realize that, as I am sure is true of many people, there are some things that I find it easier to be disciplined about than others.  Being an introvert, most of those things, for me, involve tasks that do not include engagement with other people.  For example, I can almost always, no matter how tired I am, make myself do background reading for articles I'm writing, or reading for prepping my classes.  I am pretty good, in the realm of knitting, at, say, starting second socks/mittens/sleeves.  I'm even not awful at plugging away at projects until they're finished.

Among the things that require huge discipline for me to get to is the dreaded email.  I really, REALLY have a hard time with email (I'm even worse about answering the phone, though, and making return calls; I don't like the phone at all).  However, I have come to realize that letting my inbox pile up, especially during the school year, is just a recipe for a sick stomach and disaster.  Especially since becoming chair, I have had to be very disciplined about staying on top of email, about not shunting things I don't want to deal with to the bottom of the pile, never to emerge again - it just doesn't work out well if I want to get the job done with any modicum of success.  So I'm really (pretty) good about it during the year.  And then June comes, and the email rush becomes much less, and everyone knows that academics are "off" during the summer (hahahaha - note I did not list all the academic stuff I did in the last few months), so I kind of let it go, and I find that my natural aversion to the computer comes rising to the top again.

I really have a love/hate relationship with the internet.  On the hate side, it involves things like email (see above), and it really can be a huge time-suck.  I hate walking away from an hour in front of the screen, wondering where the heck the time went and what I had to show for it.  On the love side, I have some really good friends on the other side of that screen, whom I never would have met without being online, and I do miss them when I fall off the face of the internet.  This summer, I definitely erred on the side of falling off.  I think I got a lot of really important work done on and for myself as a result of it, but I also hope that people know that it isn't any kind of statement about how much I value the friendships whose interface is largely online.  I know that I need to find some kind of way to balance both the intensity of my screen time during the academic year (not helped right now by teaching my first-ever hybrid - half online, half in-person - class), and the total avoidance of it during my time off.

So that's it, in brief.  I do have knitting to show in my next post (one new sweater, the Northmavine hoody actually on my body, a wrap, and some socks, plus a few things in progress), and some spinning (my first ever gradient-roving yarn).  Horseback riding continues, and the chickens are (mostly) still with us.  Irish dance continues for Younger Daughter, and Older Daughter is getting ready to take the test for her driver's permit (how did that happen?).  Life continues.