And the summer went...where, again?

Actually, I have a pretty good idea where the summer went.

Have you ever had one of those periods in life that seems entirely designed to forcefully remind you that You Are Not In Control Here?  Yes?  Well, me, too.  A lot happened this summer, nothing that I'd call catastrophic, but a lot that was just about letting it happen and rolling with it, because I was definitely Not In Charge.  Some of it I'll talk about here, some of it maybe not, but either way, I promised at least a few more pictures from Ireland, yes?

I believe I left off last time in Meath, having seen Dowth, and headed for Newgrange, which has been restored.  Some therefore criticize it as a Disneyfied version of a passage-tomb, and I get that.  On the other hand, when you stand in the central chamber (where no photography is allowed, sorry), under a corbelled roof that has not been restored, and that has also not leaked even one little bit in 5,000 years of Irish rain - well, let's just say it was a pretty intense experience.  In the meantime, here's the impressive (even though reconstructed) facade: 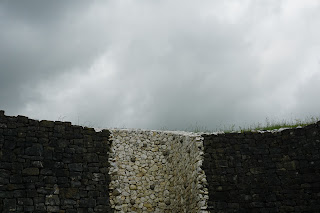 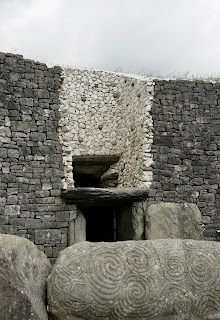 The light box on top of the doorway there admits the first light of the sun at the winter solstice.  They actually have a lottery for people to be inside at dawn for the three days around the winter solstice - with no guarantee of good weather or a visible sunrise.  (Wise, methinks.)

We then drove up to Sligo, where we spent a delightful day being shown around Carrowmore and Carrowkeel by Martin, an amazing guide who has devoted his life to the Neolithic landscape in the area - Rick and I enjoyed every minute of the day.  (Martin also recommended two fabulous pubs to go to for traditional Irish music sessions, where we stayed for hours.  It just never got old.)  We explored the very earliest pre-passage tombs, marveling at the engineering needed to get the capstones up onto their bases. 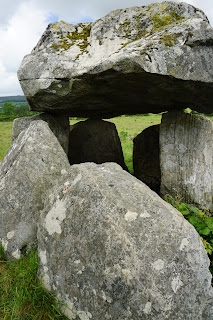 One of the things that really struck me as we explored, was the degree of intimacy with the landscape that shows in each of these monuments.  First of all, they're everywhere.  And there are often reflections at the micro scale of larger elements of the macro landscape.  I was also struck by the layering of people living in and making use of the landscape - stone circles just cropped  up (haha) in farmer's fields, or were used in buildings on crofts.  In one case, one of the largest and most intact stone circles we saw has been divided by a farmer's fence, where he refused to sell to the land trust, after they seized one part of his circle through eminent domain (but didn't succeed in getting the last bit!). 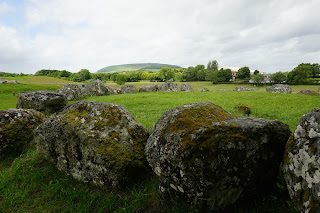 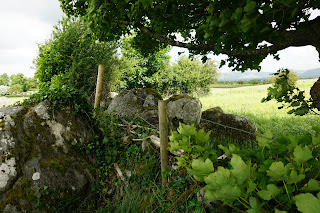 We also went and found the oldest passage tombs in the area - the precursors to Newgrange and Knowth and Dowth.  Except that we were able to climb inside these and sit, just quietly, in the dark, listening to the years. 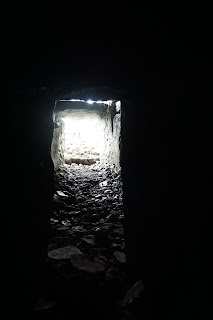 Rick and I also did some hiking in Sligo. 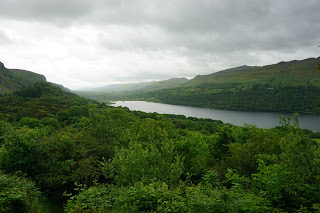 (Glacial valley, much?)  And I saw flag iris!  You know how you read about things, and you have a vision in your head of what they must be, but you've never seen them before, and then you do?  This is what happens to a California kid who grows up drinking in literature by British and Irish authors - we don't have flag iris here, but they do in Ireland! 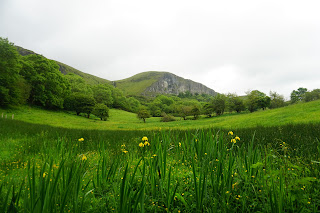 I should tell you that the greens in these photos are not enhanced - this is what it's like.  (I should also mention that I took my new camera along, and had a blast playing with it.  It's so much smaller than our older digital SLR - this one isn't SLR - and it took fabulous photos.  Then my SIL - who had recommended this one and who is an amazing photographer - came to visit and gave me even more pointers.) 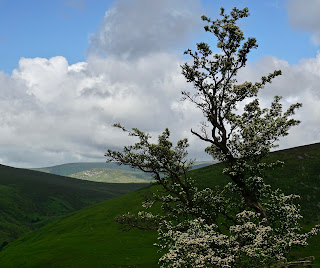 On our last night, we stayed in the Wicklow mountains, to which I must return.  Our final morning saw us hiking on the Guinness estate (yes, that Guinness), where I found white thorn trees (also something about which I've read again and again, but had never seen).  Beautiful, yes? 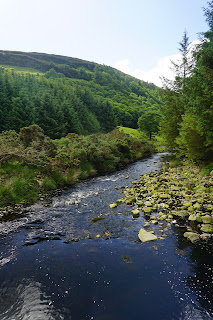 The waters were black with peat.  And the rocks growing with tiny ferns and mosses. 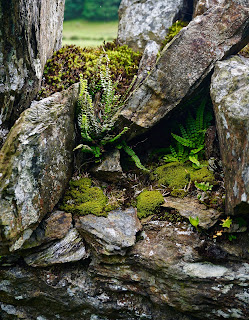 We drove over the pass towards the airport in Dublin, and stopped to look back onto the valley where we'd been hiking, and the tarn at the top. 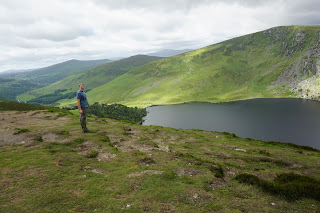 And then, finally, after a solid week of driving, during which Rick chose for me (he's the navigator, I'm the driver - and we had a left-hand stick shift for this trip!) the most narrow, windy, country roads he could, we found sheep. 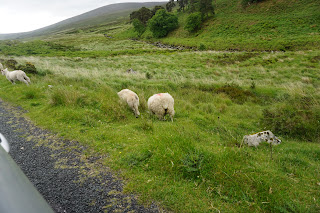 All I could say was, 'bout time.

I'll leave it there for now.  I have knitting to report on - I've been knitting along with the Year of Techniques (Mason-Dixon), and while I haven't done them all so far, I've had fun with the ones I have completed, and I've learned a few things that I know I'll use again.  I also knit my first mosaic project, which just needs its ends woven in.  (In fact, I have nothing current OTN right now - just three crap no four projects sitting on the couch waiting to be finished.  What are you knitting right now?
Posted by Jocelyn at 1:44 PM 5 comments: