Let's see if I can get Blogger and iPhoto to talk...

Well, I made it to Ireland and back (sounds like some kind of children's adventure book, doesn't it?).  It was a very short week, packed full of wonderful things.  Followed by a rather insane period of doing things, from which I am still recovering.  Basically, we got back from Ireland on a Thursday evening, which happened to be Kivrin's 16th birthday.  She and Tess came to pick us up at LAX, with Kivrin's new foster dog (more on that, I am sure, in other posts), and we took her out to InNOut (her request) for her birthday, before going home to collapse around 10 pm.  We were up at 6ish the next morning to drive down to San Diego to see the Dalai Lama, who was speaking at UCSD.  Totally worth it, the hour and a half we spent not moving in the parking lot afterwards notwithstanding (more on what he had to say in another post, too).  That afternoon, Rick's parents arrived to help us celebrate Kivrin's 16th, Rick's 50th, and Rick's dad's 75th birthdays, all within a week of each other.  So there was a party, and cooking dinners and cakes, and paddleboarding (Kiv's request)(which is, by the way, more fun than a basket full of kittens, and I now want a paddleboard quite badly).

Oh, and did I mention I'm teaching an online summer school class through all of this?

So I've been digging out from under, as you might imagine.

I took many handknit sweaters with me to Ireland.  I am normally a light packer, but a) we had to check a suitcase, so I figured, why not go for a big one, right?, and b) it's Ireland!, and c) I was giving a paper on knitting and wellbeing, so I felt compelled to represent.  But here's the funny thing - I really only got photos of myself in Oa, which was almost too warm, windy and rainy as it was.  It's definitely a winter sweater!  This means I still don't have a photo shoot done of my lovely new stripey sweater, and will have to do that later.  But Oa performed admirably. 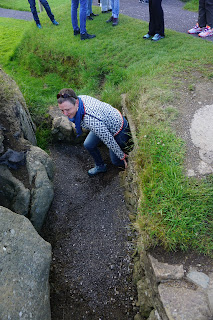 Here it is, surviving a crawl through a souterrain at Knowth, and standing on top of the large passage tomb there: 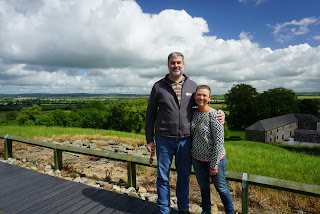 In that photo, you can see the neckline I finally decided on after no fewer than three knit/rip-back iterations.  As you may remember, I wanted to create a sort of stand-up/cowl effect, without the hood.  This turned out to be impossible - or, at least, MUCH more complicated than I wanted to get.  When I modelled my first attempt for the family, Rick politely suggested that I rather looked as though I were headed into space and about to put my helmet on, and Kivrin just said, "no".  I finally decided to keep it simple, and just leave the neckline the same on both sides (it's difficult to raise the back and lower the front in colorwork without steeking, which I decided not to do).  Then I tried to have ribbing around the neckline that would match the sleeves and hem, but that really didn't look so great, either, so I settled on simply finishing it with a red i-cord bind-off, which worked. 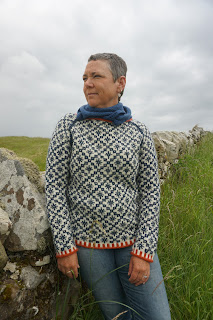 I'm happy with it. 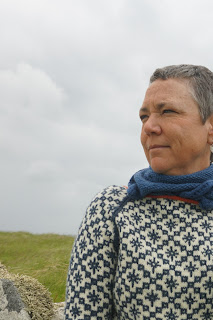 And it's pretty darned wind-proof!

So, photographic proof that Oa is complete, and has been worn to good effect.

There's so much to report on from our trip that I'll break it up a little bit, I think.  We arrived in the afternoon of a Thursday, got our car, and drove to Meath (north of Dublin).  Rick (who generously navigates on our trips, since while I am fine with being lost, I hate to get us lost, and would rather drive) decided it would be fun to take the back roads, so I immediately got to put my left-handed stick shift and small road driving skills to the test, jet-lagged and all.  My stated desiderata for the three days before my conference were: Neolithic monuments, and traditional Irish music.  To that end, we got up early on Friday morning, and headed for the monuments of Newgrange and Knowth, which are the largest of the Neolithic passage tombs in Ireland, and date back some 5,000 years from the present. 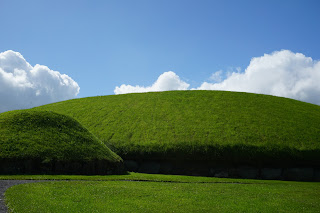 The only way to see these monuments is to go to the visitor's center, and sign up to be taken by bus out to each in turn (assuming that you get a spot - we did).  First up was Knowth, where the site has multiple passage tombs, with a large central tomb that you can see here.  Each of these is a mound with a passageway inside leading to a central chamber that usually has three side chambers, rather like a clover.  Knowth's central chamber is too collapsed and unstable to go into, but you can go inside and look down the passage. 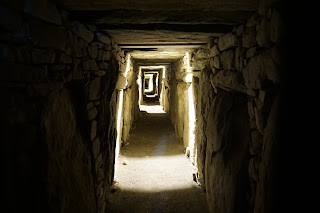 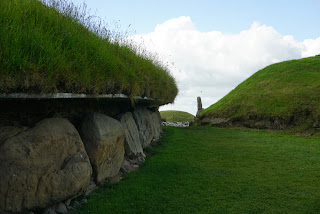 Each of the mounds is surrounded by large carved rocks (now protected by a modern cement overhang for the largest one); in many of the tombs, the rocks have collapsed outward, but in Knowth's largest mound, they have been put back upright so that it is possible to see the carving all the way around. 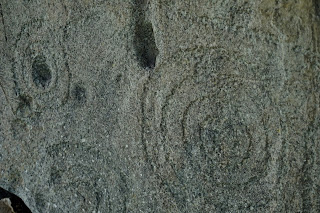 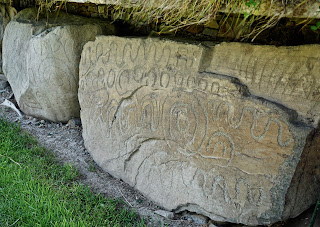 I was fascinated by these carvings, and took picture after picture.  I felt much as I did in Turkey, when we went to Catal Hayuk and Gobekli Tepe - I so wish I could sit down with the people who made these and come to understand what they were symbolizing here.  They strongly resonate with me, but who knows whether it's for the same reasons that people made them in the first place?

As with so many of these sacred sites, there have been layers upon layers of human use.  Early in Knowth's history, there was a wooden henge, which has been reconstructed based on the "shadows" left by the posts in the earth. 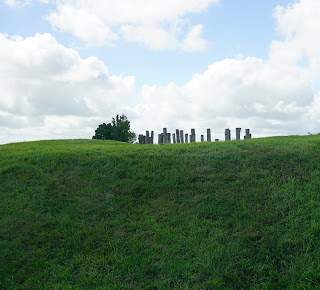 And the souterrain that I showed above came during the Middle Ages - this site has seen its fair share of use. 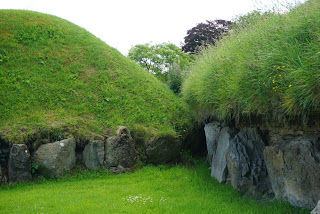 I think I'll stop there for now, and on to Newgrange next post.

Has anyone else been doing fun things for summer?  Any plans for the long weekend?  I hope you're all having as much fun as I am!
Posted by Jocelyn at 10:36 AM 5 comments:

Well, knitting has been happening - it's the writing about it that's been failing to occur.  And, to be honest, even the writing hasn't seemed so impossible - it's taking pictures that's been hanging me up.

I finished the striped sweater (cheers, clapping!).  I'm delighted with it.  I have worn it several times, to many kind compliments.  I wanted to do a nice photo shoot to really show it off.  But did not.

Then Oa was making progress, so I figured I'd do a photo shoot with both of them.  Except that finishing Oa turned out to be a real pain in my butt (because I had Plans regarding the neckline, as you may recall - and you know what they say about Plans).  It is now done (wild applause from the audience!), and I am happy with it.  It took me a while to work up to the finishing and blocking (and it took forEVER to dry), but that, too, is done, and I've even worn it (and was told I should have submitted it to the county fair, but was too late).  So photo shoot time, right?

Well, no.  Because the couple who manages the barn where Disco boards are having a baby this month, and I decided, as you do, that the new baby really needed something handknitted.  So that had to get done, because you really can't ask a breathtakingly pregnant woman to hang on while you knit.  So I did that.

And while I didn't manage a photo shoot, per se (because I was - literally - seaming and weaving in ends and sewing on buttons while sitting ringside watching Tess ride), I did get a few shots before I wrapped it up and handed it over.

And I was going to show you those shots (because honestly, it's the cutest little baby surprise jacket ever, due to an unexpectedly felicitous yarn shortage and subsequent switch halfway through).  But Blogger and iPhoto are refusing to talk, so that's not going to happen.  See?  Me and knitting photos are existing in a relationship that can be summed up by the word "thwart".

Because even after all that was done, and I thought I'd do a photo shoot of my new sweaters, I had a paper due to a journal last week.  And then when that was done, I needed to put together the presentation for my conference next week.  Because tomorrow I'm leaving for Ireland.

To present a paper (written with my dear friend and colleague Marie, she of the pussyhat survey) on the relationships among knitting, identity, and well-being.  How cool is that?

So do you know what I have to go figure out now?

That's right:  what sweaters am I packing, and what knitting projects do I need to bring?

When I get back:  photos of sweaters in the Irish countryside.  I promise.