Like everyone does at this time of year (I assume - maybe I'm overgeneralizing), I have been contemplating The New Year Post.  Somehow it seems like, when posting at this time of year, one is meant to look over the last year, contemplating resolutions kept, and resolutions not-so-much kept (and why is it that that list always seems so much more front-and-center than the other?).

You know:
Did not lose weight
Did not Achieve Enlightenment

To be fair, I did some things this year that weren't so much resolution-oriented, as finally doing or trying things that have always been on the back burner.  I started horseback riding, racewalking, went to Turkey, was promoted to Full Professor, established an inconsistent but real sitting meditation practice, established a more-consistent home yoga practice.  All of those are desires that have been kicking around in the back of my head for a long time - some (like horseback riding) since childhood.

Mostly, I tried to focus on the word I chose as a touchstone last year, instead of establishing resolutions: mindfulness.  That's been a word I've chosen a few times now, as something to keep me on track, and this year I feel like I made some pretty significant breakthroughs in finding that place of mindfulness more often.  Sometimes, it means being mindful of sad feelings like those I wrote about last time; sometimes, it means being open to being happy; sometimes, it means just sitting with the squirrel that apparently resides in my brain, flitting its tail and chittering at every insult.  It's a busy busy squirrel.

So instead of that list of future resolutions, I've been trying to decide whether I want to re-up on the mindfulness, or add something else.  In the end, mindfulness is the key to focusing on any concept that I'd like to bring into my life, so I decided to throw caution to the wind.

That's my word for the year.  Not seeking abundance, but seeing it where I already have it, which is in so very many places in my life.  Feeling a lack of abundance is something that drives me to grab opportunities when they come up, out of the fear that nothing like that will ever come again (not always a bad thing, but not good when I am overcommitted; this is something I have been working on), to buy things that I don't need, out of the fear that I'll never get the chance again (I have this SO much more under control than I have in the past; it is one of the reasons why I have passed up several interesting yarn and fiber clubs over the last few years, for example - I already have a STABLE stash), to eat things that I don't need or want, because I feel a need to reward myself, and fear that I won't have opportunities to "treat" myself in the future.  That one's a kicker for me.

I can't be the only one who feels that way about food, right?  There are so many times when so much of my life is utterly overwhelming, and I feel that I "deserve" some kind of treat, or reward for surviving.  And so many treats and rewards require time or money, and I don't feel like I have time or money (to get a massage, take a riding lesson, sit quietly and knit, read a book).  In the end, I have to eat anyway, right?  It's not like I'm not spending time and money on food in any case (my little squirrel brain says), so I may as well just indulge a little...

Is it just me?

So, abundance.  A good focus, and one which I think will remind me to be mindful of the things in my life that I have already: daughters, husband, friends, activities I love, opportunities that fulfill me instead of leaving me drained.

This past week has been one of quiet crafting and contemplation, which I think is exactly what I needed to come to the realization that I have this habit of living in a state of persistent fear of scarcity, even when surrounded by abundance.  It was good to give time over to being quietly creative. 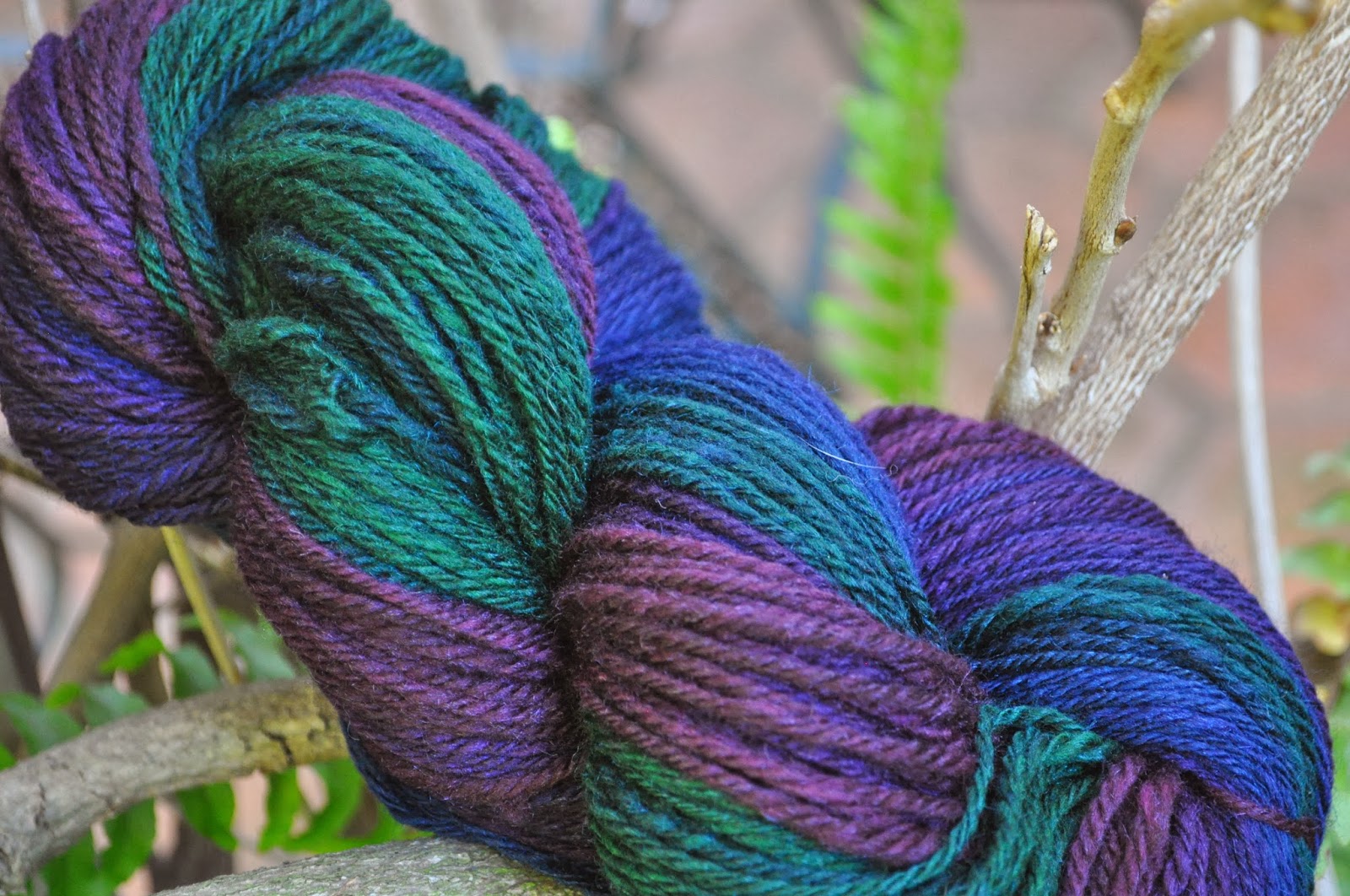 That's FiberOptics gradient, in the Midnight colorway.  I spun this one woolen, and chain-plied it, for a lovely round plump three-ply yarn.  I wasn't able to get the whole thing onto one bobbin, alas - which tells me just how much loft is added in the woolen spinning, compared to the worsted.  The last braid of FiberOptics gradient I spun, I spun worsted, and it all fit (barely) onto one bobbin, both the singles and the three-ply. 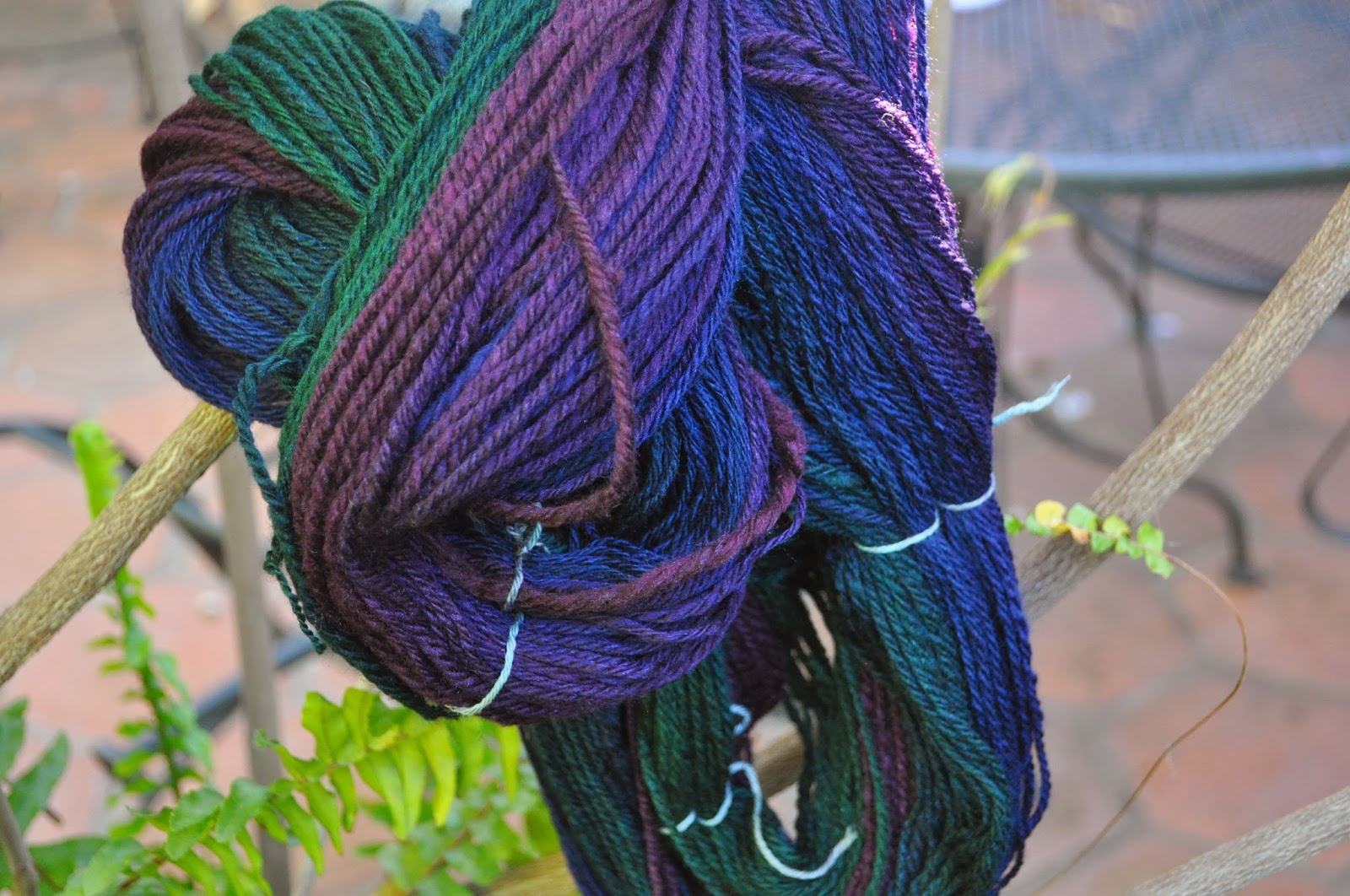 The colors are a little darker and more saturated than you can see here, but this is close.  This is destined to become a Spectral cowl, which I saw and immediately fell in love with.  I started to go down the rabbithole of needing the yarn that it was knitted in, and then remembered that I already had this beautiful stuff in stash, and went this route instead.  I am glad that I did.

On New Year's eve, just before the ball went down at midnight New York time (as late as we manage to stay up these days), I finished a project that has long been hanging out in the WIP pile: 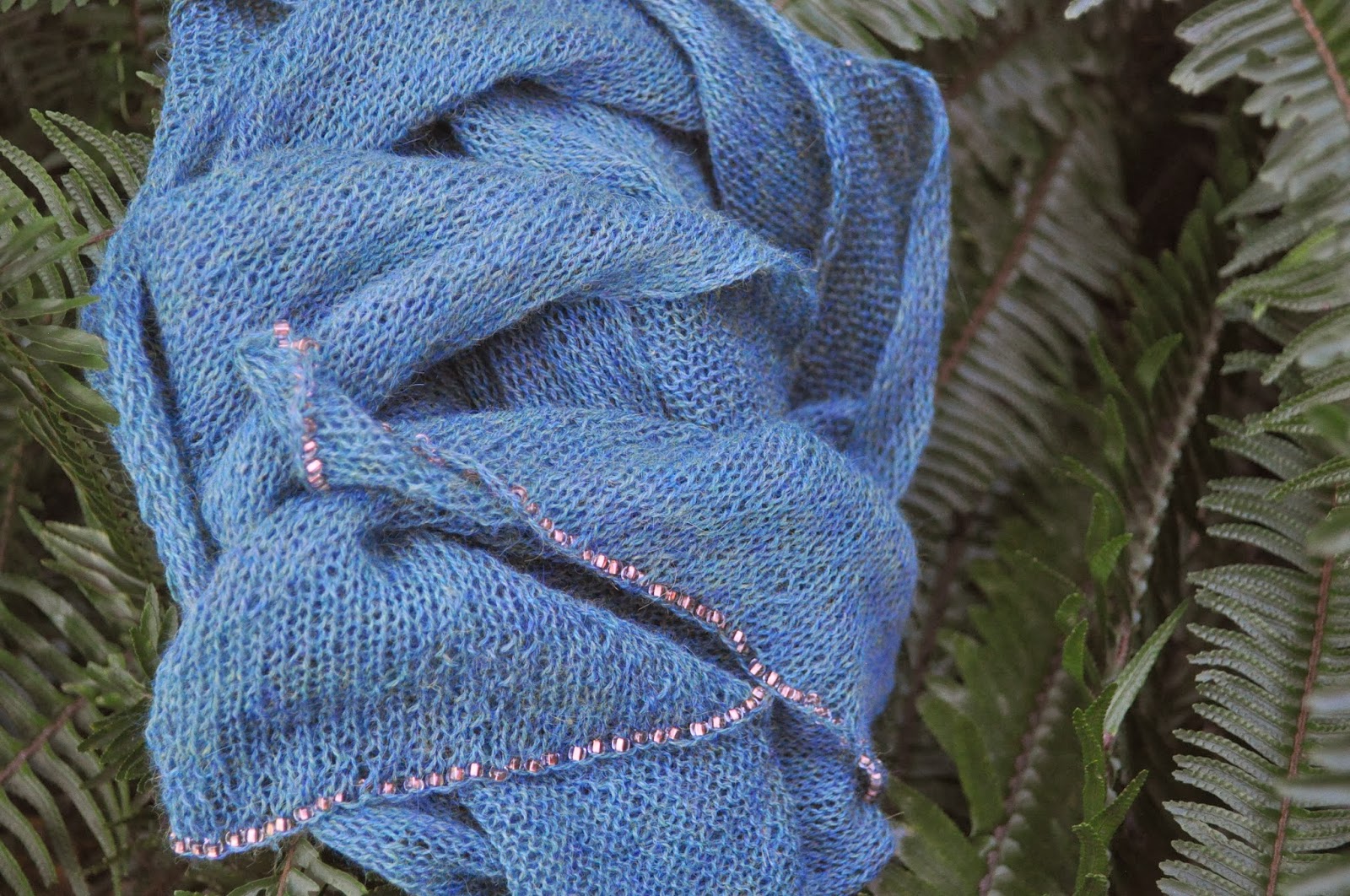 This is the second of the Bias Before-and-After scarves (Churchmouse Yarns pattern), which I started an appallingly long time ago.  But they're both done now, and I am looking forward to wearing them separately (I wear the purple one all the time) and together. 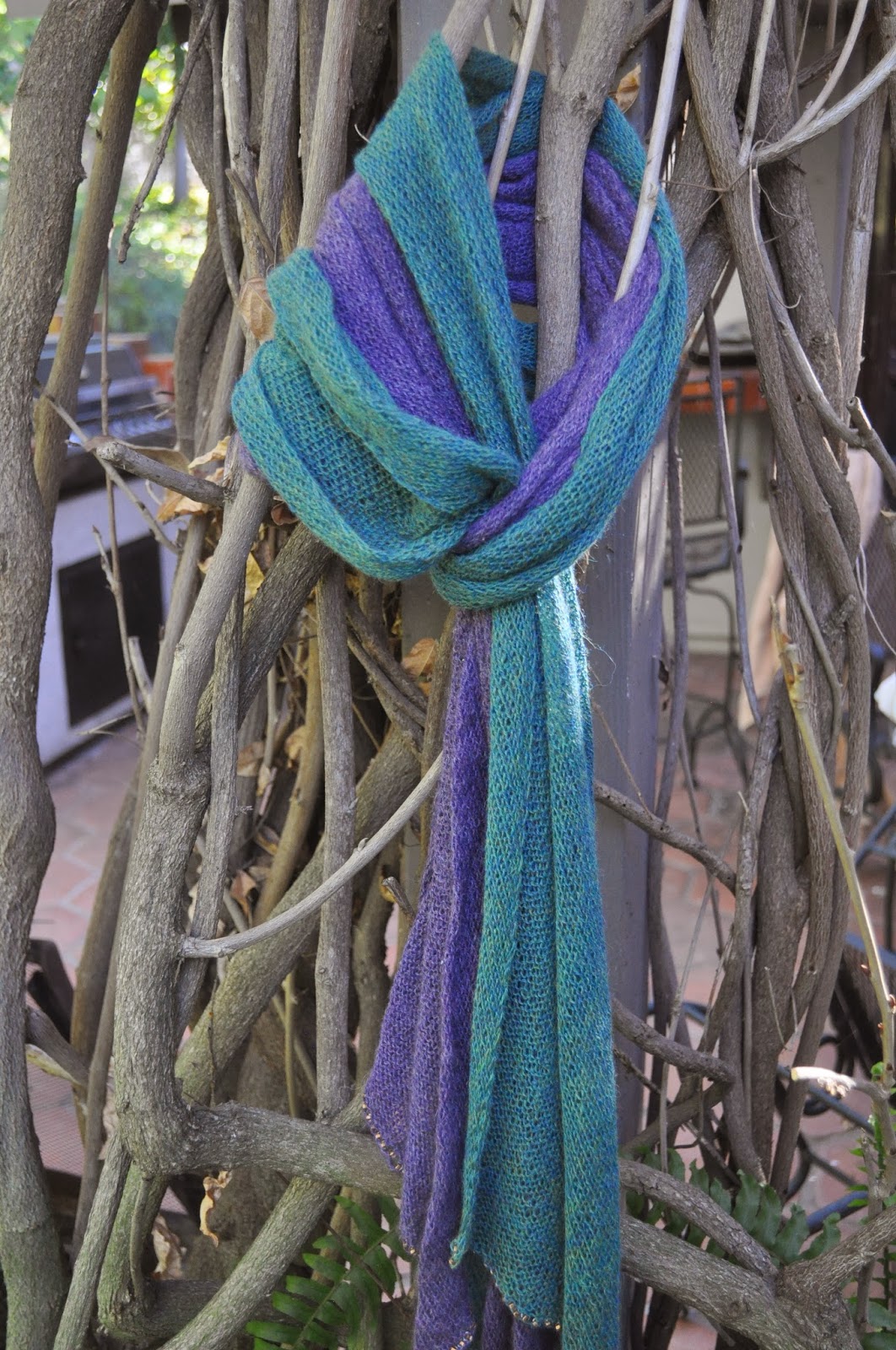 When I went out to photograph, I noticed an unexpected color theme here. 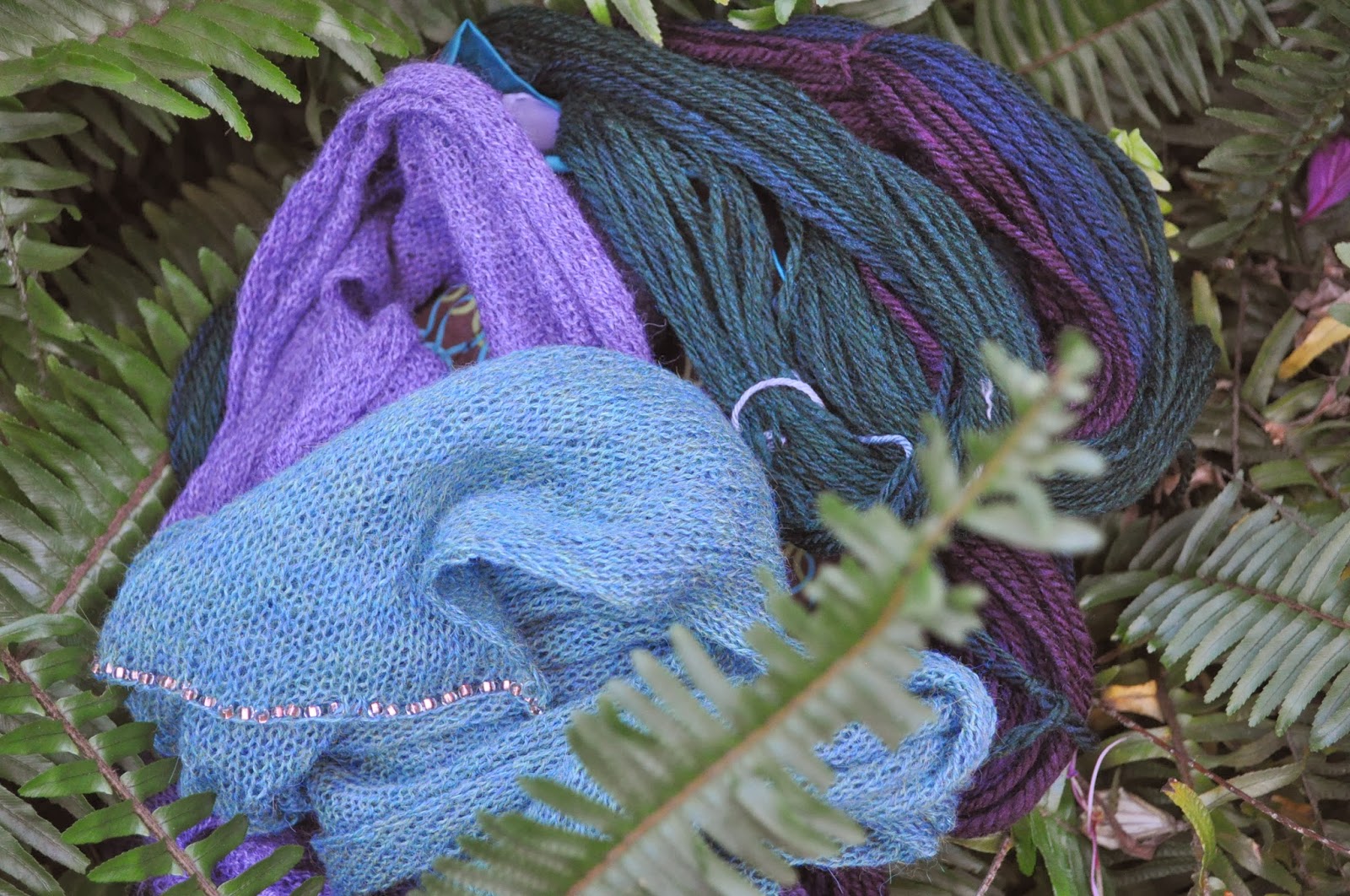 (The color of the second scarf is closer to the middle picture - you can see the similarity.)

I have also been plugging away at Green Wood, and I not only made it through the yoke, but the short rows as well.  I have set the sleeve stitches aside, and am now entering into the long slow stretch of the body. 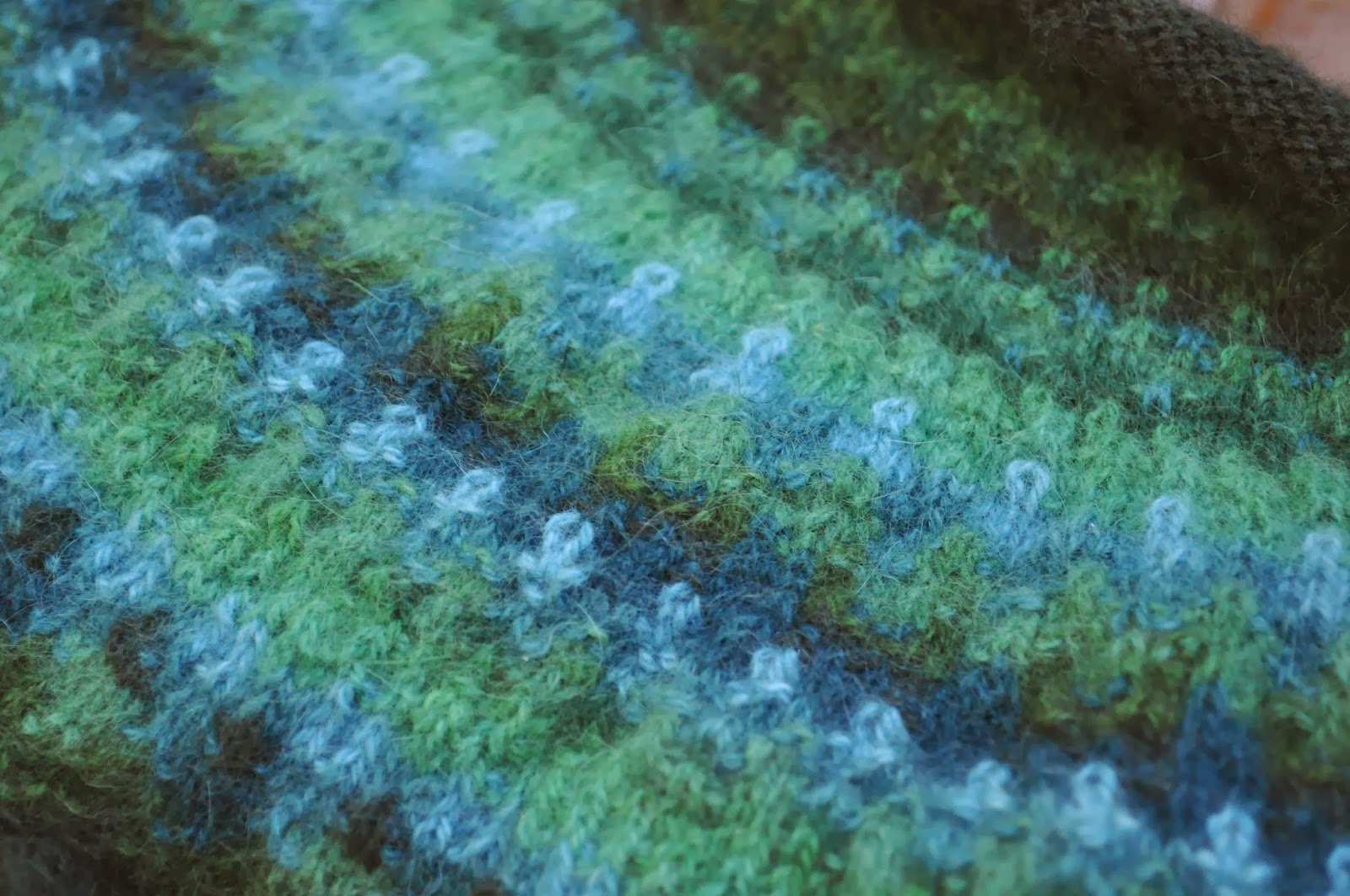 This is very tiny yarn, knitted on size 1 needles (size 0 for the yoke; I could have knit the body on 0, and I think that that makes a nice fabric, too - but this is probably slightly more wearable here in San Diego). 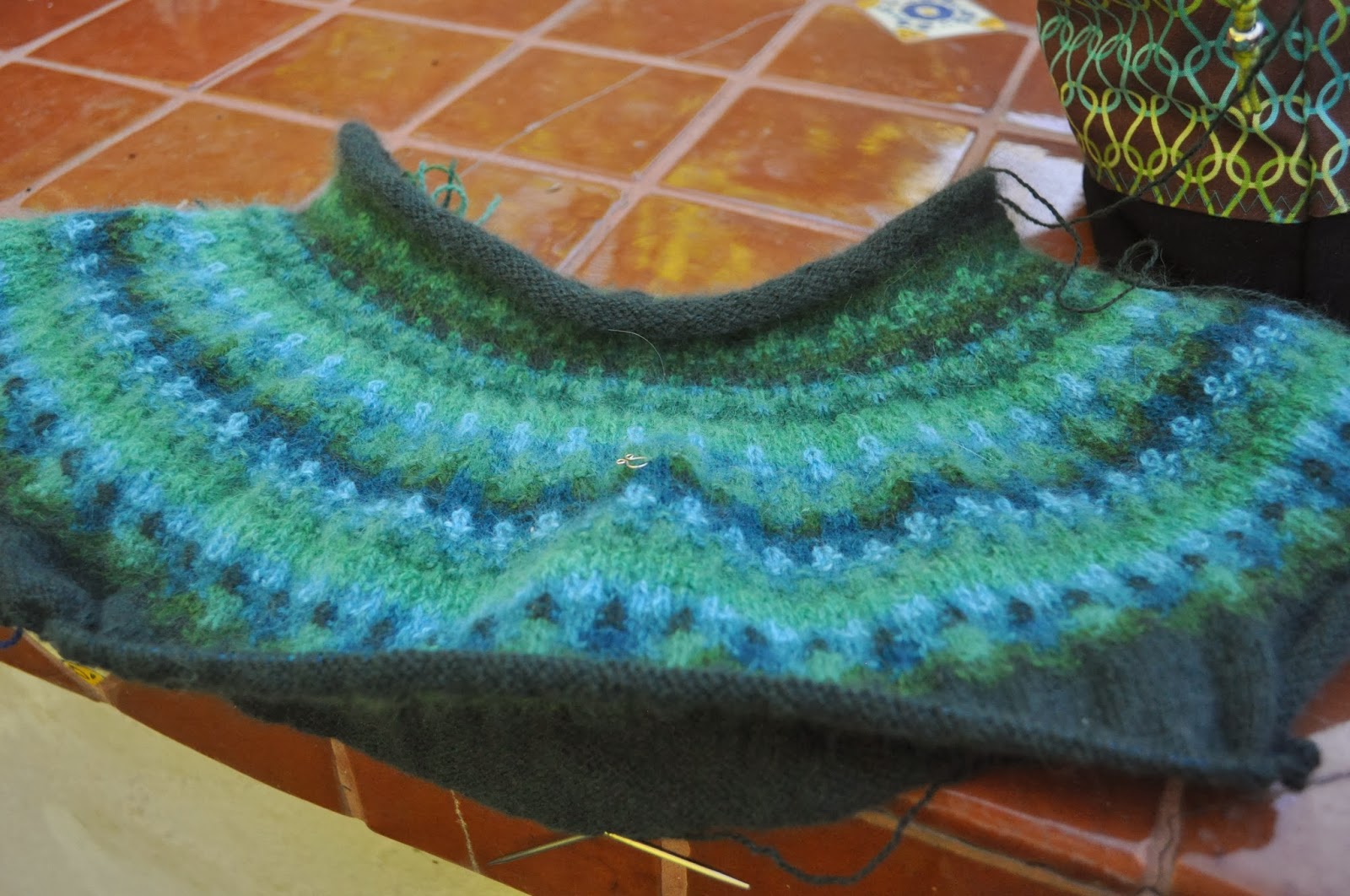 Just in time for all of the meetings that I will be attending next week.  With luck, this will help me keep some of the happy break time glow, even in the face of politics and meanness.  I really appreciated all the words of support and wisdom that everyone shared in the wake of my (admittedly, not very happy) last post.  Thank you for the additional reminder of the abundance in my life.