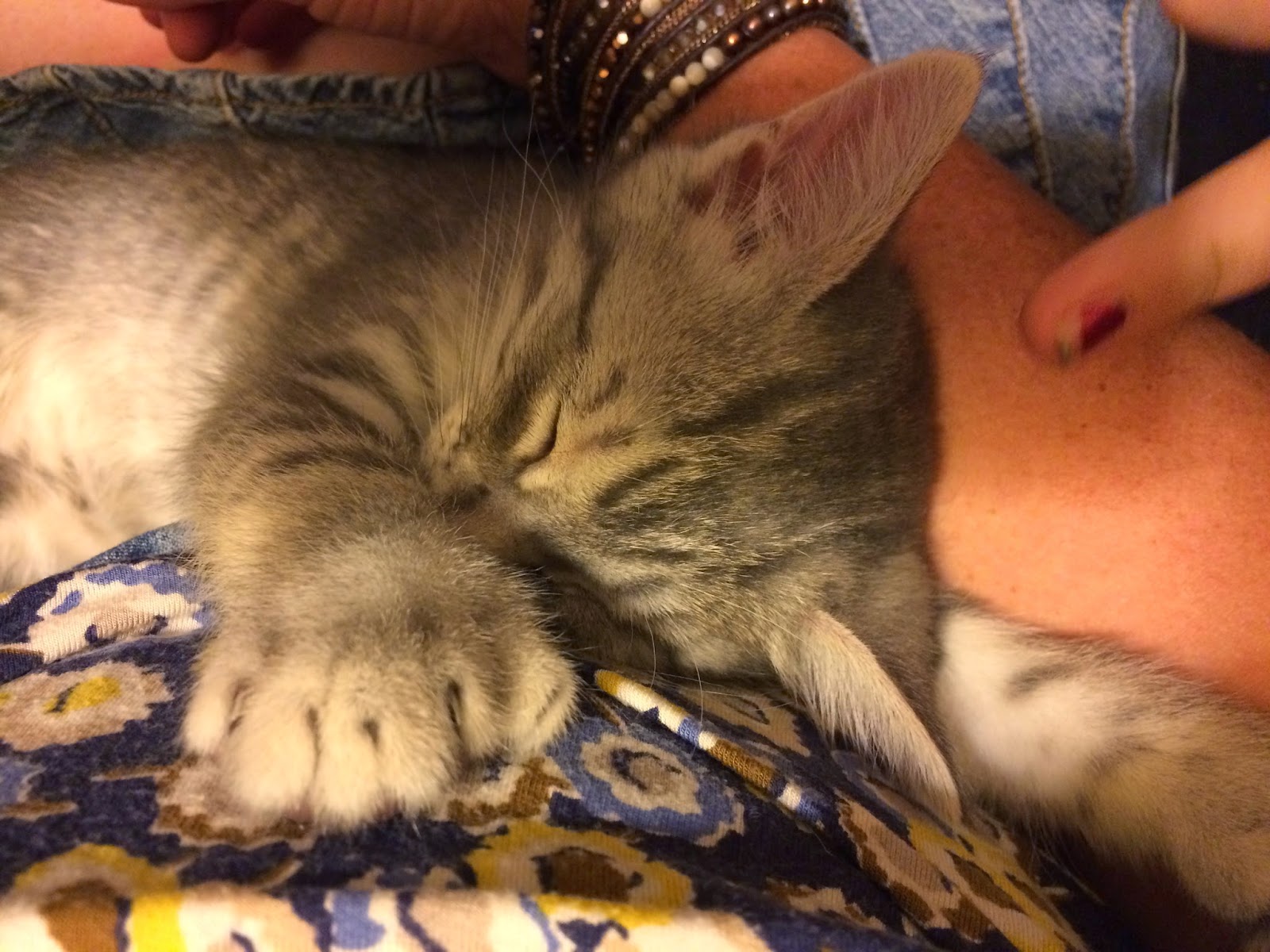 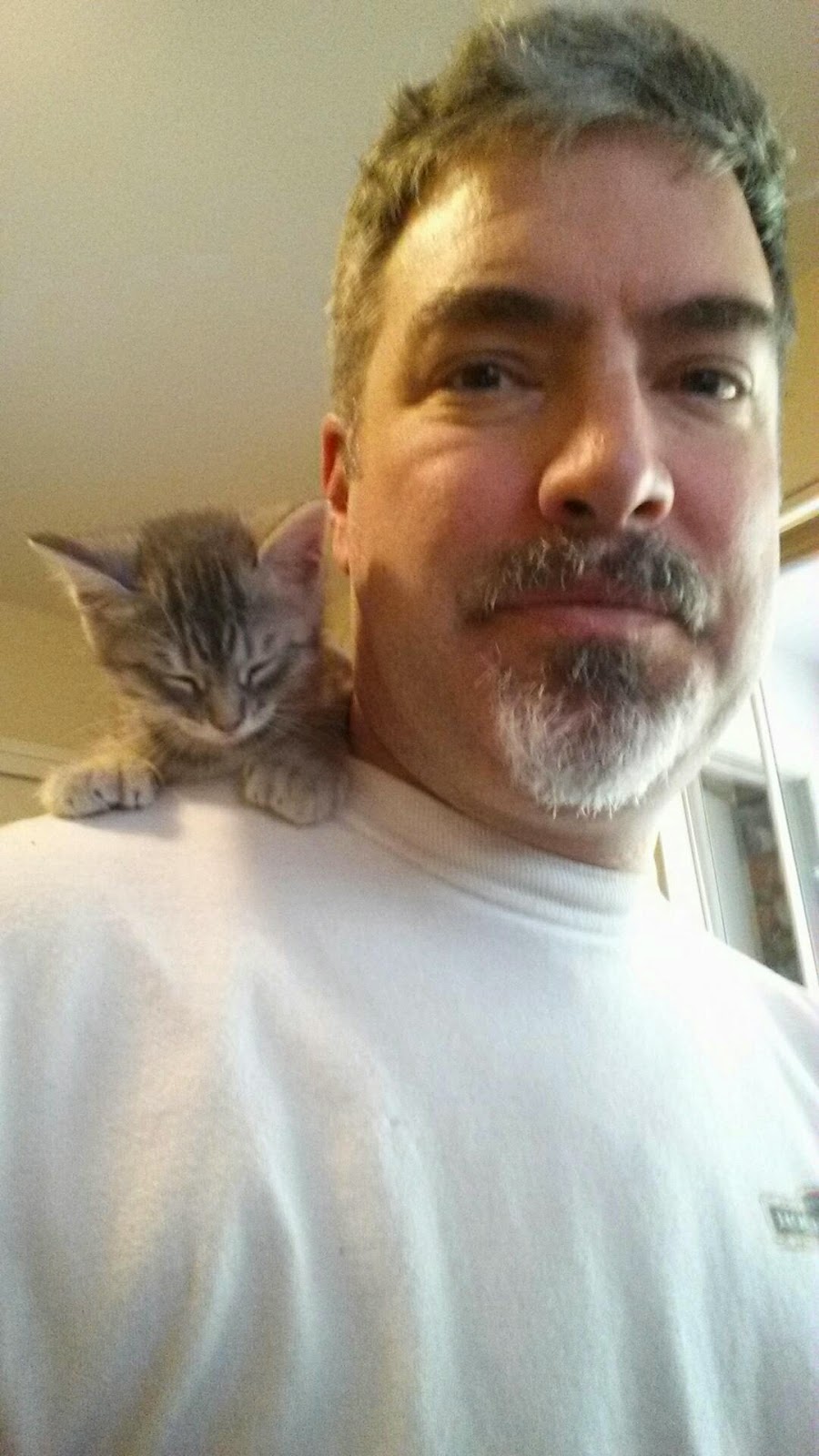 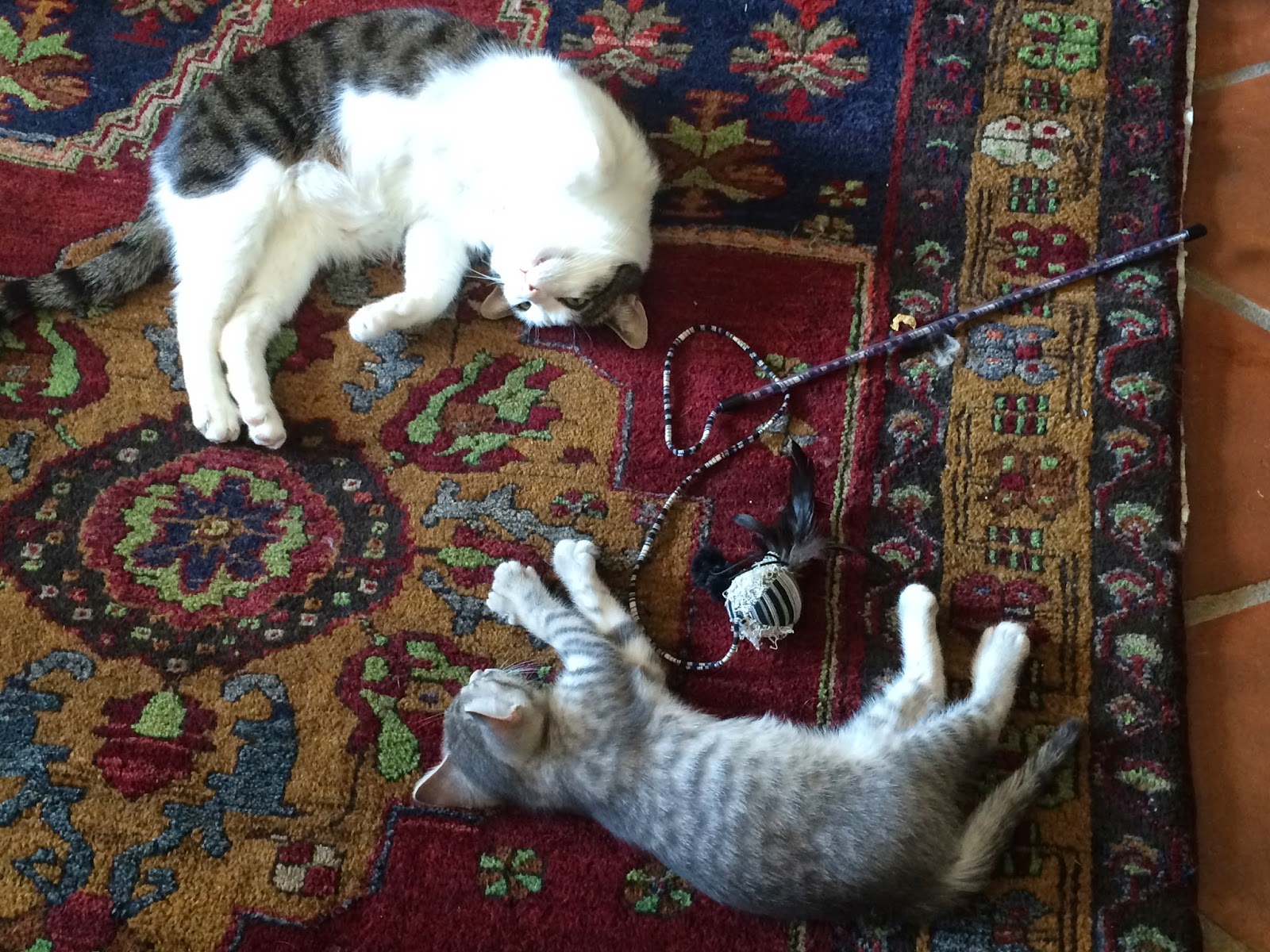 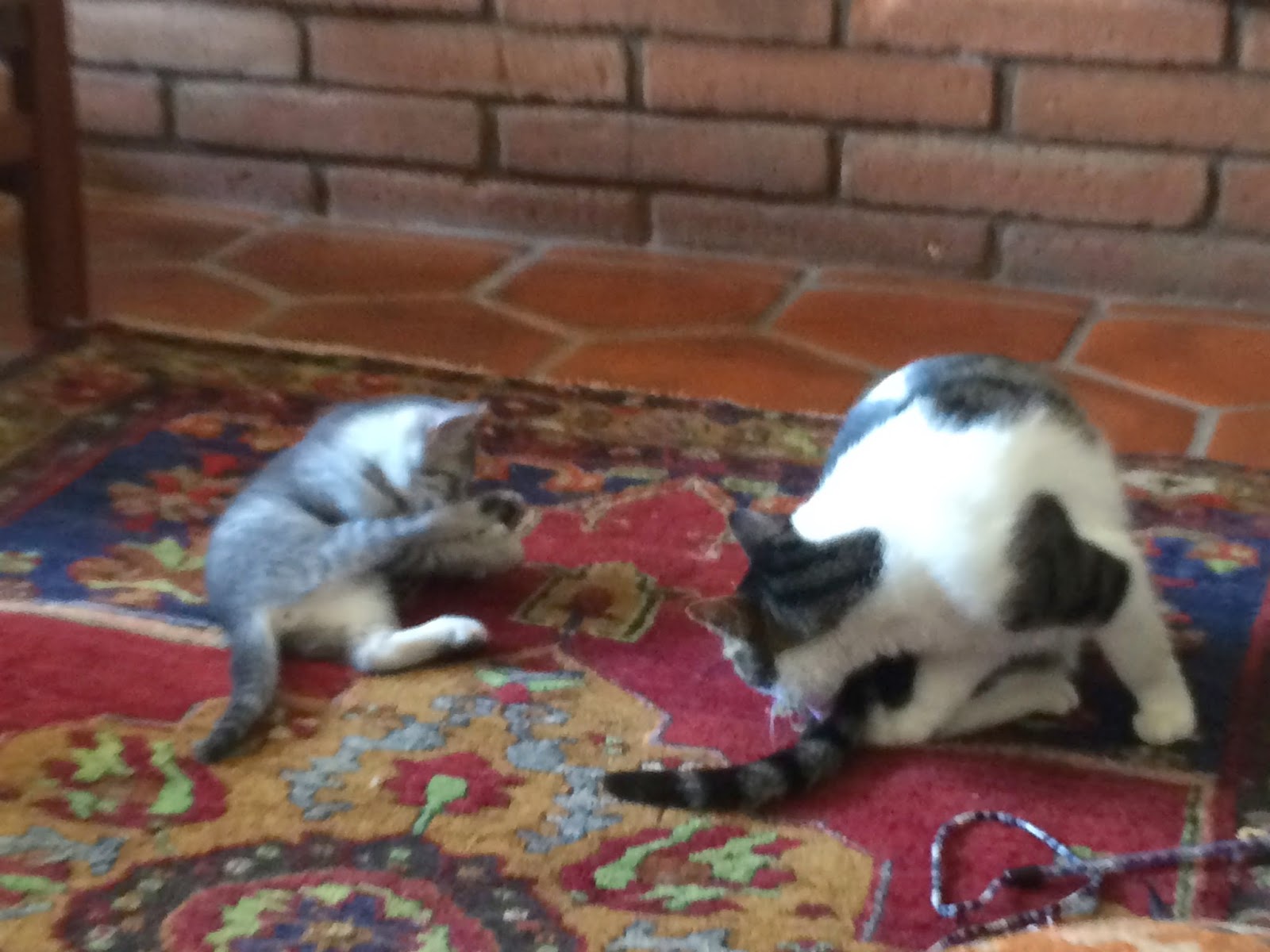 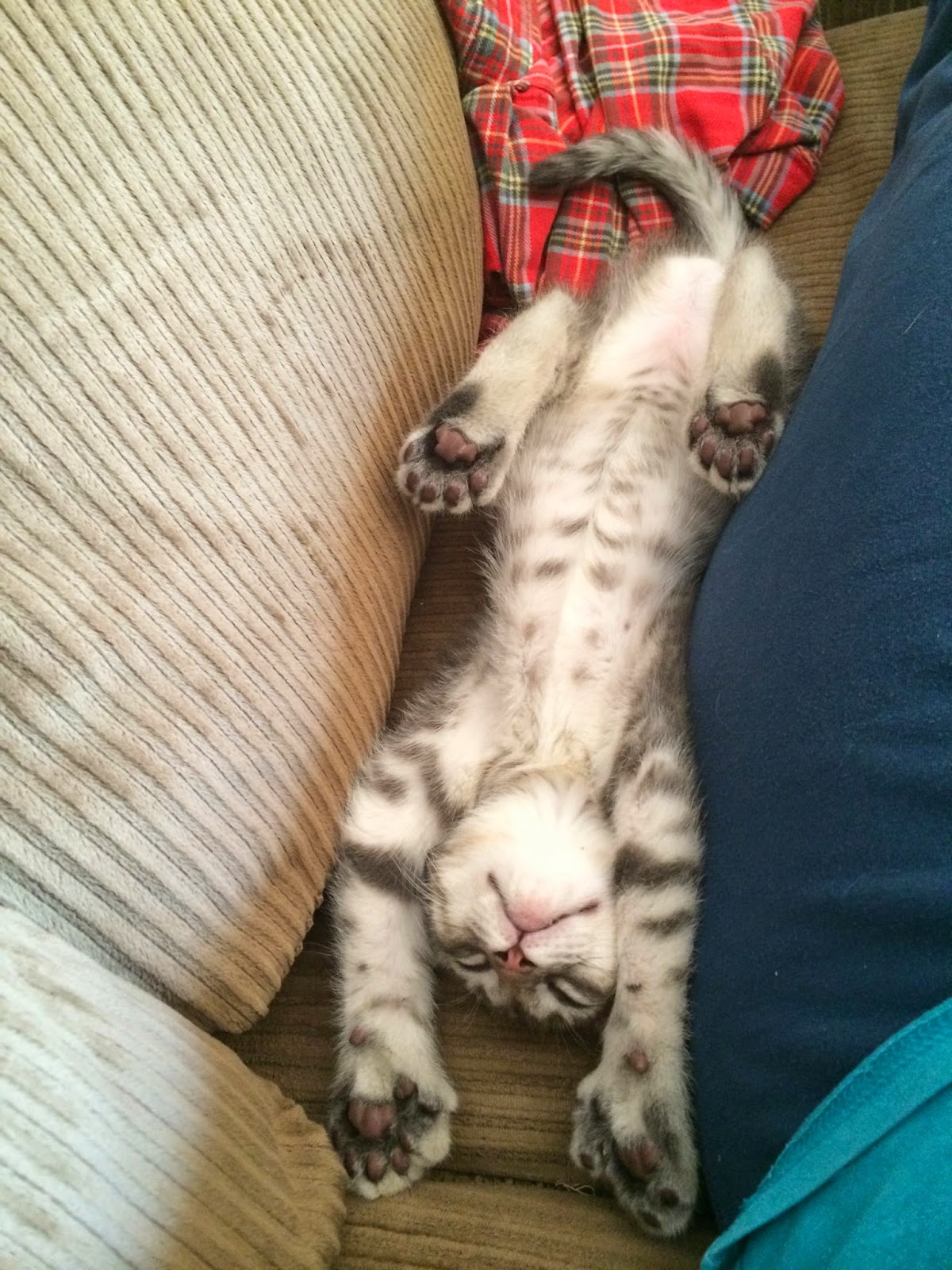 Her name is Bastet, and I think she's going to fit in just fine.
Posted by Knitting Linguist at 2:22 PM 11 comments:

It has been a ridiculously long time since I posted.  I keep trying to find a way to talk about everything that's going on without boring people to tears or sharing too much.  I will soon; and I also have much knitting to share when I do, including the Bohus (!!), which is done, and which I was able to wear on a trip to the East Coast when they still had snow and it was entirely appropriate.
That's for another time, though.  Meanwhile, this drive-by posting is to let people know that we're surviving the fires (thank you to those who have been checking in), and to ask if all of you in fire-danger areas are OK?
Tess and I were on campus yesterday when the San Marcos fire started.  Within about five minutes, the view from my office window went from a small plume of smoke to this: 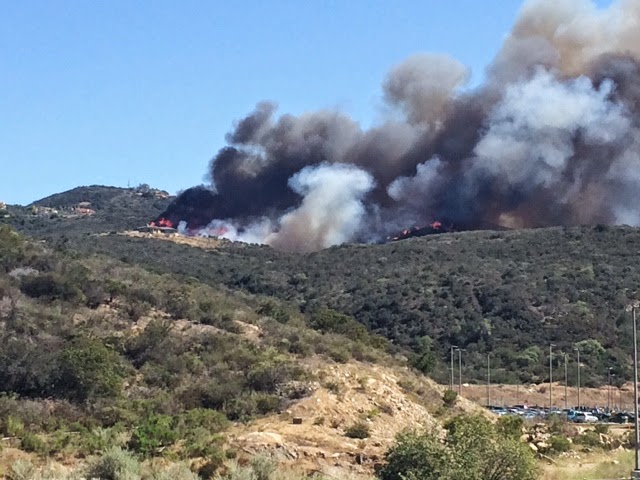 At which point, I told the folks in my department to get the heck off campus, and started banging on doors.  Note: no fire alarms went off in the buildings, and the alert system which calls for things like evacuations can only be heard outside.  Note:  it's finals, so a lot of people were in classrooms, with phones off, getting no notice that they needed to be getting off campus.
It took more than 20 minutes to get out of the first floor of the parking garage, and another 40+ to get off campus.  We clearly need a better (read: actual) evacuation plan.  As we sat stuck in traffic, this was our view: 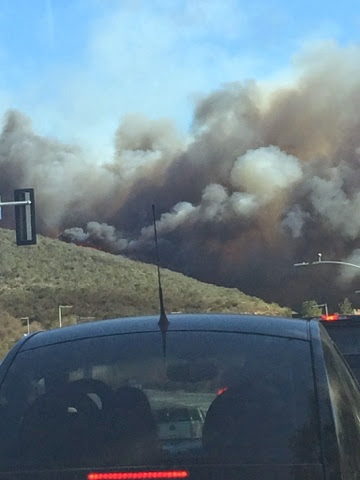 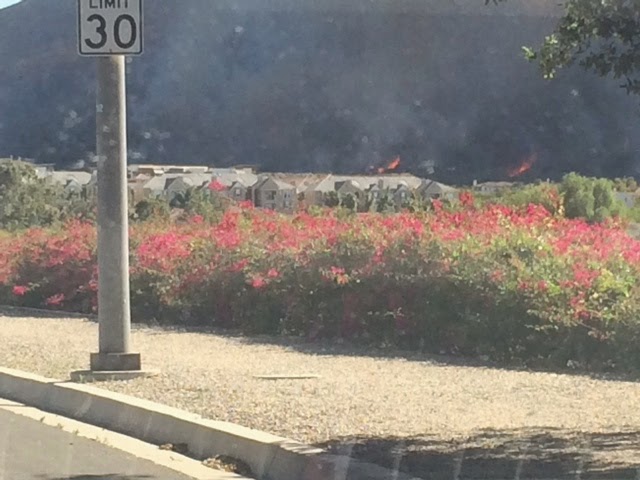 We did finally make it out (my contingency plan was to abandon the car and head for the dirt parking lot), and home.  It's quiet here, and there don't seem to be any new fires in the area (fingers crossed).  The girls' schools are closed through the weekend, and prom is postponed for my older daughter.  My campus is closed and all commencements are cancelled.  The fire seems to have kicked up over there again: 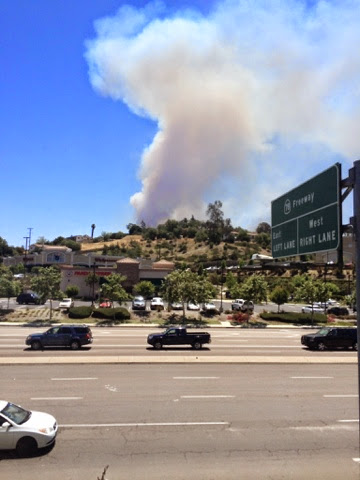 So we're keeping the pets indoors, and a weather eye on the smoke.  It's 100+ out there, and the humidity is under 10% - I can't believe there are people fighting fires in that heat, but I am so grateful that they are.  Stay safe if you're in the midst of any of this!
Posted by Knitting Linguist at 1:34 PM 8 comments: