So, in the wrestling match that happens regularly between me and my life, I occasionally get slammed to the mat. As, for example, happened this past weekend (where weekend means Thursday-Sunday -- have you ever noticed that, over the summer, especially with kids, the weekend sort of spreads? much like fat on thighs...). On Thursday, my daughters' school had a graduation sort of ceremony for the kids who are moving from the pre-elementary classes (it's a Montessori school) into the elementary class. I didn't expect to be quite so touched by the sight of my younger daughter in graduation robes, but she was so charmed by the whole experience, it was hard not to be. She was the line leader, and took her role very seriously: 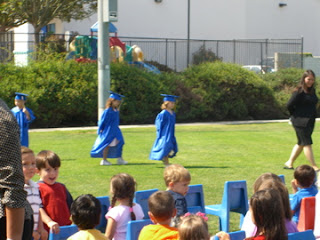 (note the hands behind the back in approved Montessori style)
She was absolutely thrilled to get all dressed up, and was particularly excited about getting to keep her tassel. I think this is the kind of thing that means a lot to a younger sibling, since she's so rarely the center of attention, compared to her big sister, who gets to do everything first. Her big sister's class sang: 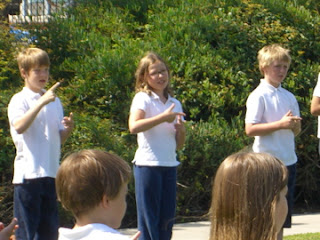 while she watched (if only my students were this well-behaved at graduation!!): 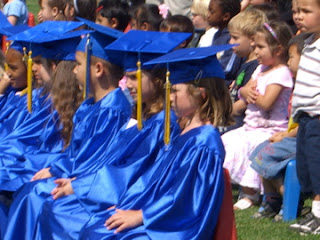 And then it was time to go up for their diplomas (the wicked grin here is much more in keeping with her personality; this child could rule the world someday -- I can only hope she'll use her powers for good): 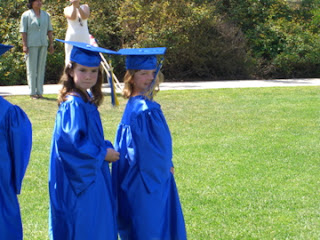 It was particularly touching because the five kids from her class have all been together since their toddler-room days, and they're all moving to first grade together (a lot of kids leave the school after pre-school, so that's very nice); also the teacher she's had for the past several years is leaving the school, so everyone was saying goodbye. I think she had a good time: 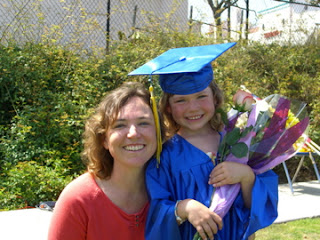 So, that was Thursday.

On Friday, it was her birthday -- it's hard to believe that it's been six years since she was born! I wanted to write a long post about how amazing and unique my small one is, but I was too busy actually doing her birthday with her to get it together. Funny how life does that.

Saturday was a big birthday dinner for my husband, who actually turns 40 today (happy birthday, Rick!). I took him and some friends to dinner at Stone Brewery, which is one of DH's very favorite places, and a good time was had by all (no pics -- too busy trying out good beer). Then Sunday, we went to SeaWorld to celebrate Kiv's birthday (instead of a party, she decided that going to SeaWorld just the four of us was what she wanted). The pictures aren't on my computer yet, so you're all spared (maybe I'll sneak a few in tomorrow), but suffice it to say that, as always, I cried during the darned Believe show (what IS it about seeing people get into the water with a 9,000 lb marine mammal that gets me every time? Is it the faith they have that said mammal will not suddenly get hungry? Or imagining what a thrill it must be to work with an animal like that? Every time we go, I get all teary, and try to decide whether I'm too old to change careers...). We fed the dolphins, which is still exciting, and petted the bat rays (who feel like nothing else I've ever touched), and generally had a great time. And all that, without even going on the rides!

Of course, I managed to come down with a cold on Friday night, and I've been staving it off all weekend while doing all of this, which is part of why I a) haven't posted, and b) am not doing a particularly competent job of posting now (note the lack of humor, or even, so far as I can tell, narrative coherence). It will get better, I promise. And, of course, with all of this going on, I have not managed to knit a stitch since Thursday night, when I completed two whole rows of Hanami (which I have a strong desire to finish before we go to a wedding July 7th -- hahahahaha!! never say I'm not funny). There will be pictures of Hanami tomorrow, along with yarn details. I truly love this shawl. From the moment I saw it on Kay and Ann's blog, I have been in love with it. I bought the pattern, and bided my time, until I found the perfect yarn. I'll let you guess what the perfect yarn for this one might be, but I will tell you that it's not pink (I just don't wear pink enough to make that work).

I promise, less life and more knitting tomorrow.
Posted by Knitting Linguist at 9:38 AM