I finished the modified Jaywalkers last night! After trying the first one on Kivrin and realizing just how fast she's growing, I thought I'd better bust a move. 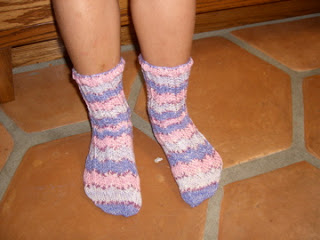 The most amazing thing to me is that they ended up matching almost exactly. Talk about serendipity. The matching was unplanned, and only happened because I pulled too long a tail for the long-tail cast-on. I even considered recasting, just to keep from wasting the extra bit of yarn (I was nervous about having enough; it came very close in the end), but I didn't, and now the stripes are almost exactly the same. The best bit about that, even better than having matching socks, was how easy it made it to see whether I was making them the same length -- y'know, after the third pink stripe, time to start the heel, etc. Very nice.

I've actually been thinking a lot about serendipity lately (making the matching nature of the socks even more, well, serendipitous). It has always been one of my very favorite words, ever since I read a book as a child entitled Serendipity (early hints of my future career, maybe?). I like it because of how much fun it is to say (serendipity serendipity serendipity; I defy you to say that and not feel better about life); because of the nice root morpheme "serene"; and because of what it means. The idea that sometimes, things just work out, not because they're planned or worked out ahead of time, but just because life is like that, is one which inspires me. I think it inspires me because you have to be paying attention for serendipity to really happen; mindfulness is key, and mindfulness is something I need more of. Potentially serendipitous things happen all the time, but we miss them because we're focusing on the plan. When we take our eyes off the plan for a little bit, sometimes new avenues open up that are so much more, somehow, than the path we thought we were on.

I just finished the book Three Cups of Tea. Talk about serendipity. Here's this man, planning to summit K2, who, on the way down from his unsuccessful attempt, gets lost. Loses his porter, loses his way, and ends up in a remote village that he never, in a million years, would have gone to on purpose. And in that village, he is taken to see the "school" that the children attend. Because the village can't afford the $1/day fee for a teacher to come every day, the teacher only comes a few times a week, and on the other days, the students gather, by themselves, in a field to work on their lessons, which many of them must scratch in the dirt with a stick (can you imagine most American kids doing this?!). And seeing that, this climber decides that he is going to raise the money to build them a school. The book is about him and what he did, and how it led to him building 55 schools (and counting) in Pakistan and Afghanistan, schools which educate both boys and girls, and which provide them with alternatives to conservative madrassas.

So, the message of the book is that education creates opportunity. Again and again this man finds moderate Muslims who want their children to get a solid education in math, science, and language arts; all of their children, mind you, including their girls. And the point is that when these children grow up, they have resources which provide them with a wider range of options than they might otherwise have. Of course, I'm biased towards a message like that. I'm an educator myself, and if there is one thing that I think is vital, it is the ability to reason critically and clearly. I hammer my students with the idea that education is the only thing that makes a democracy work, that we need to think critically to make good choices for ourselves, our communities, and our nation, and that a good education can teach us to do that. Now, you and I may both think clearly about something and come to different conclusions, but we are far more likely to be able to work together in spite of those differences if we're thinking, rather than spouting dogma.

And this man wouldn't have built these schools if he hadn't gotten lost. And, as importantly, if he hadn't kept paying attention to what was going on around him instead of focusing on his failed bid for the summit of K2. In thinking about this, I realize that my career, in many ways, is the result of this kind of serendipity. I was going to be a lawyer. And then I took a class in linguistics for my French minor, and everything changed. I was going to be a historical linguist, specializing in Celtic languages, and I had a conversation with a professor about language revitalization, and everything changed. The Native California group I work with now, who have been so tremendously generous with me, and whom I consider to be close friends, I met only because I was assigned to help them at a conference. And here we are, five years later, embroiled in an ongoing struggle to document and revitalize their language. Serendipity.

I should mention, by the way, that serendipity isn't always a bed of roses. This guy who built the schools, Greg Mortenson, is doing amazing things. But he's not perfect. He's always late, and he's away from home months at a time. I think he'd probably drive me nuts (I like being on time, and I like having my husband home to help with day-to-day living), but it doesn't mean he's not doing amazing work. I think that this is often true of people who do this kind of intense, vitally important work; they're hard to live with. I know that I wouldn't want to be married to many people I've worked with on language revitalization. They're obsessed, and understandably so, but it's hard to be close to someone like that sometimes. On the other hand, many of them find spouses who are the kind of people who are more patient and understanding, and less selfish than I am, and that's serendipity, too. And I think that by doing this work, and trying very hard to live up to what people need of a linguist doing this research while being a good mother, wife, and person, I keep growing in ways that I never expected. Serendipity.

Wow, philosophy from socks. Who knew?
Posted by Knitting Linguist at 1:09 PM

What a great post! Over a year ago I saw that book in a library when we spent a couple days at the coast and I'd intended to secure it when we got home but then forgot.

Have you read, "Room to Read"? I can't remember the name of the author who stumbled upon a village, while trekking in Nepal, where the schoolbooks were kept in a locked room because they were so precious. He quit his job with microsoft and started the Room to Read foundation. He too is a highly intense, always traveling, dreaming and doing with no means to maintain a regular home, let alone a relationship!

Education is KEY to almost everything worthwhile in life.