How is Monday over already?! This is my one day where I get to work at home (an attempt to find a day each week to concentrate without folks knocking on my door), and it's over! How did that happen?

What's worse, I spent the whole day working on one thing. I mean, it's great to have it done, but it might have been nice to do something else, for just a minute. It's a co-authored paper that I'm editing, and I found myself very annoyed by some of the suggested edits, because they're more a British/American thing than the kinds of substantive edits that I am usually happy to address (as in, there was a comment along the lines of "uses punctuation wrong"; excuse me?). But if it's just a dialectal style thing, it seems like it would be very hard for me to know how to change what's "wrong", since I don't speak or write any dialect of British English (is this the linguist in me coming out?). I mean, I wouldn't demand that someone respell "colour" in my edited volume... Ah, well, it's done. I wish, thought, that I'd also had time to think about an abstract I'd like to write for a conference in New Zealand next summer (love NZ, would like to go back). Tomorrow, however, is another day. (I'm starting to feel like a mix between Little Orphan Annie and Scarlett O'Hara -- now there's a book with one of the world's best opening lines...where's my copy of that book? I could get into that right now...)(That parenthetical is evidence of what I call the shiny-object-distraction syndrome that takes me sometimes, in which I tool along down one train of thought, until, Oh, look! A shiny object! And I'm off in a different direction. Others might call it distractable. I choose to think of it as whimsical.)

I took the girls to the Mingei yesterday in Escondido to see the origami exhibit, which was truly amazing. I mean, look at this dragon: 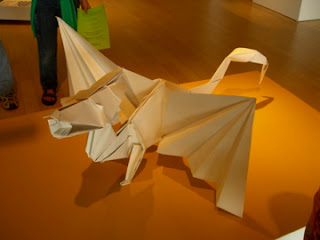 It's made out of one 9x9 foot sheet of paper. Seriously. I'm in love. And there was a crane: 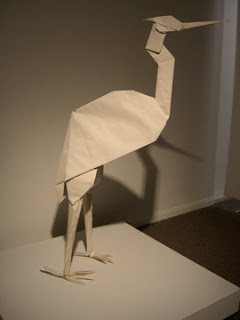 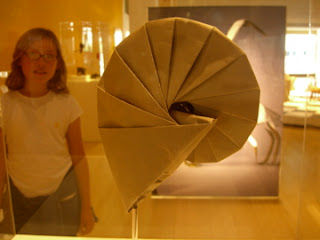 And wouldn't you have loved this for a wedding bouquet? 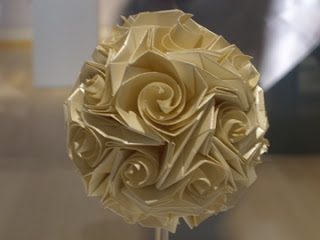 There was more, but I will try not to go overboard here. The kids got to take origami lessons from different people, and had an absolute blast. After errands, the day ended with a potato and ham frittata, baked tahitian squash and green beans, followed by a strawberry-rhubarb crumble (I love the farmer's market). After another chapter of The Blue Djinn of Babylon for the kids, it was bedtime for them, and work time for me.

I'm starting to feel like we've really lost the work/family balance thing, and it's distressing me quite a bit (not to mention being a strain in discussions with R about these things). In my optimal world, work happens at work, during the day, and evenings and weekends are for time as a family. Sometimes that doesn't happen, but when it doesn't happen more than it does, I get fretful. I know it means it's time for a change, but it's hard to control what and who has to change for it to really ease up, y'know? I guess I can only do what I can do, and leave the rest alone. Meanwhile, it's lentil stew for dinner tonight, and, with this paper done, maybe I can actually knit after the kids go to bed. Fingers crossed, everyone, fingers crossed (meanwhile, I'm sending out good paper writing thoughts to everyone else who's working on one right now, too!).
Posted by Knitting Linguist at 4:54 PM

Those good paper-writing thoughts have helped a lot, thanks very much! Back atcha. While my paper isn't DONE, it's done enough to travel cross-country and get edited a bit in my hotel room -- following the fine example set by one of my grad school mentors. That origami was unbelievable. I wonder what the mathematical ratio of folds to the square inch might be for something like the bouquet ... imagine that fine motor control!

LOVE the origami! Thank you so much for sharing... you could even sneak more of those photos in here and there, eh?

Although I fully realize that our 'life activities' differ... I seriously relate to the underlying thoughts and feelings you have.
"Where does the time go?"... indeed, I ask myself this question every.single.day.