But the voices on my blog told me to!

Well, it was unanimous. The hair had to go (you all said it more nicely than that, of course). So, it went. (You should have seen my hairdresser's face when I told her she could cut it off. She kept saying, "Really? Really? Finally? You'll let me cut it off?" She has often pointed out that my hair is less than happy when long. I have told her that I understand this, but that sometimes my hair's happiness is not my happiness, and, in the end, my hair is not the boss of me. Except that it turns out it is.)

So, another crappy Photo Booth shot (because again with the laziness relative to the camera and the time it takes to download one photo): 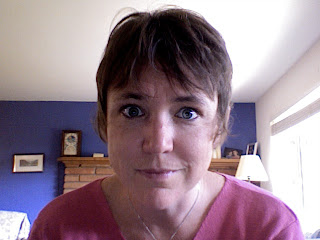 You get the idea.

Thanks everyone for the kind comments. I try to get back to anyone who has an email address or a blog I can go haunt (bwahahaha), but sometimes people leave really nice comments and I can't write back. Kim and Kate and Gwen -- thanks! The Two Men In a Boat (to say nothing of the dog) recommendation is an excellent one for the refinding of humor (I also have my kids out look for my sense of humor, in case they took it to play with and left it out in the yard). Either that or Connie Willis' To Say Nothing of the Dog, which just makes me laugh every time. And Kim, you're right about the weather -- Santa Anas are coming back, which is not conducive to Kauni wearing. I guess I'll have to knit something else. (I'm kind of thinking that it has to be Anne's new design, when it's done; have you people SEEN the Raven shawl she's working on?!) In any case, I appreciate all the input; I told my husband that whatever happened with my hair was your fault; but to be fair, I also told him that my better mood was to your credit, so it balances out in the end.

He actually said a very entertaining thing the other night. We were out to dinner with the kids, and I mentioned something that one of you had said in the comments, and he said to me, "I wonder when the time will come that I'll say to someone that my wife knits, and they'll say, 'Oh! has she heard of the Knitting Linguist?'" When I was done laughing hysterically, I suggested that that time was probably never, but that it was very sweet that he could even imagine it. I'm still snortgiggling over that one.
Posted by Knitting Linguist at 2:38 PM

Oooh, I LIKE it... cute and beautiful at the same time, and I've got to say, you look in better spirits.
I just went and looked at Anne's new design...beyond stunning, I really will need to knit that.
Oh..and what your husband suggested may happen? It could...

In solidarity with you I went and got my hair cut today too--from short to shorter. Yours looks great! If your sense of humor still hasn't returned after you try all the good suggestions, how about Gerald Durrell's My Family and Other Animals? There's a book that makes me laugh hard enough to pee my pants every time ....

cute and if you look like that in a bad photo-both photo - then real life must be WOW!. That lace of annes might just be calling you, i think i hear it ...

Your hair looks amazing!!! Good choice. I am not allowed to choose my hairstyle. I have a very, very forceful stylist. She is currently allowing me to leave it long. That could change. I always do what she tells me to do since she is pretty much always right.

You may be surprised by how many people know you from your blog. The first time I was at a knitting group and heard someone whisper, "Is that Sheepish Annie? I READ her!" I was just about floored!

Someday, my new laptop will come. Then I will amuse the internet with Photo Booth shots until they beg for mercy. I can't wait!!!

well, you know I'M a fan of short hair! it looks great and i'm so happy you are considering the raven shawl as your next piece.

Oh, am I incognito? I'm too lazy to sign up on Google/Blogger and remember another password. Or I was at work the last time I was thinking of it, and well, again with the passwords. laflaka.wordpress.com

Feel better with the hair off? Looks great!