in blogland. People must be as swamped as I, as posts are appearing less frequently, and comments aren't quite so copious as usual. I feel the same way; like I don't quite know what to say that isn't, "Still knitting Christmas socks. Still haven't quite finished the shopping. Still avoiding the mall like death." That would be the short of it.

The long of it is that I've just finished the foot on the second of Rick's socks; I might have been farther along if I hadn't tempted the Knitting Fates by declaring that these socks were well in hand, and I that I was pretty sure I'd be able to finish them by Christmas without breaking a sweat. So said I.

Then I merrily knitted along on the first sock until I thought I was through about half my skein, put it on a piece of scrap yarn, and for kicks, asked Rick to try it on. Turns out that, large as Rick's feet are, they are not quite so large in the real world as they are in my imagination. (I should say here that, in spite of all of the griping about the size of Rick's feet, I think that it is better that they are large than not. After all, without relatively sizable feet, a man who is 6'6" might find himself blowing over in high winds, and we wouldn't want that.) In fact, the socks were about an inch longer than his actual feet. Which is enough longer that there is no fudging or getting around it: these socks were too darned long. Simultaneously cursing my imagination and praising myself for not have cast the sock off, I ripped back to just before the heel, picked up the instep stitches and the heel stitches, and started turning the heel again. I was thinking so hard about whether to use the same heel pattern I'd been using (from IK Summer 2007, generic toe-up), or whether to try something that I was thinking should work and which made more sense to me (more on that later), that I was several rows into the short row section before it occurred to me that the whole point of ripping back had been to make the foot shorter, and by stopping just before the heel, I hadn't actually removed any length from the foot.

I ripped again. And I made darned sure that I took an inch out of the foot while I was at it. Then I started the heel again. Now, the IK pattern involved backwards yarn-overs, and the knitting and purling of three stitches together in the second half of the heel. As I was knitting it the first time, I kept thinking, "Surely I've seen a simpler way out there. This seems like more work than I want to do. Haven't I read about wrapping stitches, and knitting the wraps with the stitches or something like that?" Of course, I was far too lazy to go and search for such a reference, so I decided to wing it. As I wung it, I thought, "Someone on the blog is going to have a really good reason for me why I shouldn't be doing this, and by the time I ask, it'll be too late. Ah, well. Tra la la." (Clearly, the end of the semester has affected me in interesting and unexpected ways, not the least of which is the manifestation of a new carefree knitting attitude.)

So, in the first half of the heel, I knitted to the last stitch, wrapped that stitch, put it back on the left needle, turned and purled back to the last stitch, wrapped and turned, and kept on like that until I had about 10 stitches left. Then I knitted to the first wrapped stitch, knitted it together with its wrap and turned, purled back to the first wrapped stitch, purled it together with its wrap, and turned. It certainly seems to have created a heel, although the bits where stitches were worked with their wraps is not as neat as I'd like. On the other hand, they're no worse than the k3tog/p3togs from the other pattern. So. Here's your chance to collectively gasp and tell me why no knitter with half a brain would do this to an unsuspecting, defenseless heel whut never done nothin' to no-one. (Seriously, though, opinions and input are welcome.)

I've got the first sock back to where it was (and even a bit higher with the same amount of yarn, due to the shorter foot), and I've gotten through the foot of the second sock. Here's the top, with the k2p1 ribbing, and the little random cables on the side. 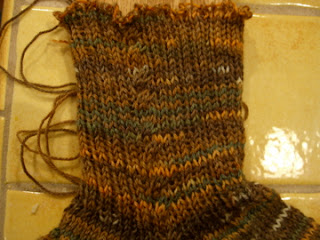 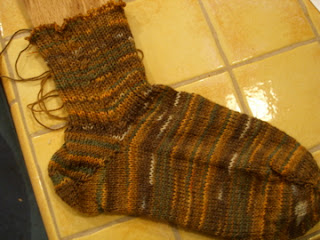 Not too bad. The heel's a bit pokey in the back, but that doesn't show on Rick's foot (tried it on again before starting the second, to be sure). Once these are done, I can do some knitting for me!

Meanwhile, I have an iPod question for those of you who use them. I cannot, for the life of me, figure out how to make it mark my place when I go from an audiobook to a podcast and back again. So, if I'm listening to World Without End and decide that I need a break from medieval England and listen to Cast On, and then try to go back to World Without End, it starts all over again at the beginning. And let me tell you, with a 45-hour audiobook, it is inadvisable to start at the beginning every single time I listen. Is this inherent to iPods, or is this just me? Advice would be much appreciated!
Posted by Knitting Linguist at 5:03 PM

Can't help you with the ipod, don't have one...:^)
Crazy wow on the socks though, I've not knit toe-up, so have absolutely no input for you there, see? I'm totally worthless :^)
(really I'm just tired)
I've had a wonderful bit of evening catching up on all your recent posts though, now knit on...

It sounds to me like you are doing the heel right. Here is knitty's tutorial for short row heel and toe.

But it looks right even if you didn't do it right.

On the audiobooks thing, this guy has a super duper amount of information regarding audiobooks on I-Pods. I don't know if it will be helpful but it can't hurt to look. His FAQ has a lot of good topics.

Hopefully you get that whole knitty website...it looks cut off to me, but just search knitty short row heal on google and its the first one.

I know if i switch between podcasts, as you do, it seems to remember my place when I get back to cast one or whatever. I don't do audio books - so not sure how they work, but they should work like podcasts? shouldn't they? maybe its a setting when they save the file?

the socks look great, and the heel sounds perfectly acceptable to me, it is a short row heel? I like the japanese short row technique (google it I think the site is nona-knits or some variation on that),with no wraps. I've never mastered the yarn over method, but switch between the japanese and the wraps depending on where my head is.

That's odd re your ipod, mine saves my place in the audio book - with the exception of once or twice when there's been an upgrade and it went wacky - I wonder if there's an option that needs to be selected? Never fear though, it SHOULD be saving your place, so all you have to do is find somebody who can tell you how to make it cooperate. ;-)

Every time I've had an iPod question (for D#1--she has one, I don't, let's not discuss it) I have actually found the scarily young people at the Apple store very helpful and barely condescending. of course, given the timing, I might wait a day or two....

My iPhone seems to just "know" where I was, if I switch back and forth. If it's been awhile....

Which medieval podcast did you pick up?

Oh no! about the socks! But finally right.

I hope to get better. I have been cutting out a few blogs too. Fine tunning my list of who I read. It gets too many and I feel like I can't give them all my attention with comments etc. So I figure it is better to have a handful that I can pay good attetnion too!

I find it hard sometimes to keep up with it all.