There is dissension among the ranks. I swore that there was to be no casting on of projects until The Stockinette Slog has ground to its conclusion. No messing about with other yarns. No affaires des coeurs. No fondling of fibers other than those of the alpaca. The ranks disagreed with me, and after a massive insurrection, succeeded in winding a ball of yarn. 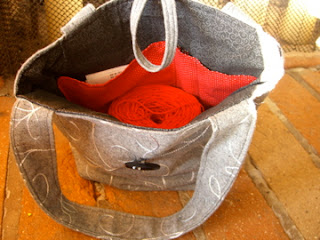 Things have gotten so bad that the yarn even made it into a bag, with the pattern neatly arranged to show the chart, needles and notions included. At that stage, however, I managed to reassert control, and have retrenched. The troops and I have recommitted ourselves to The Stockinette Slog (I know, you thought that would end with "to the asylum", didn't you? I like to keep you guessing), and refuse all further distractions.

Except maybe spinning. Spinning doesn't count as an immoral distraction, does it? Inspired by Anne, I went today for a quick lesson with a local spinner named Lila. I've felt like I've been doing all right, but there's something about operating in a feedback vacuum that I find disturbing, and I figured it would be all too easy to fool myself into learning some really really bad habits without some kind of reality check. The very nice lady whom I went to see said that, in fact, my yarn (she actually used the word "yarn", can you believe?) was looking pretty good. Practice, she said, practice; my biggest problem is that I keep letting a bit of twist into the drafting area -- in essence I'm spinning faster than I'm drafting, which results in some overtwisting of the singles. And then she skeined up my first yarn, the one I did on the turkish spindle with the lovely roving that Wanda sent (Lila said that it was balanced, can you believe? Something in my life, balanced? Who would have suspected?), and suggested that I wash it to set the twist. Here it is skeined. It really does look much more yarnlike this way, no? It turned out to be about 25 yards. 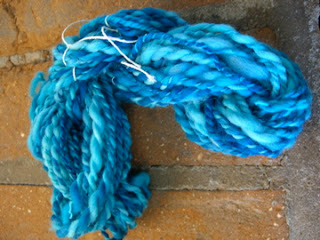 And here's what I've got on the high-whorl spindle right now. 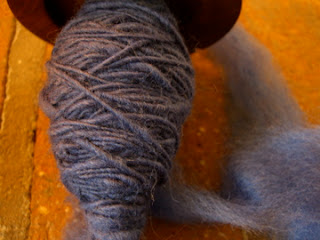 I'm going to ball this and spin some more at about the same weight (note the way that I am fooling myself here into thinking that I have some kind of "control" over the "weight" of my "yarn". You do not need to be fooled by this; you are wiser than I.), and ply it. Then I might try to see if I can get a bit finer. I generally don't like knitting on needles much bigger than a 6 or 7; what I've got here is going to be more in the 13-15 range once plied. Bulky doesn't quite cover it.

After we played about with this a bit, she asked, all casual in that way people are sometimes, whether maybe I'd like to try a spinning wheel?

Hot damn, baby. Now that was some fun. I'm in very serious trouble. Somebody come save me before I start impulse-buying spinning wheels. See how weak the moral fiber is around here? Clearly, it needs to be spun and plied.
Posted by Knitting Linguist at 3:57 PM

I can not help you there. I have fallen to the deepest depths and dregs of spinning myself. I own a travel Lendrum and have tried several times to talk my friend out of the traditional wheel she has not used in 25 years, wheedling, whining, begging. She is nearly worn down and has offered me a table loom as a sop.
About Solvang, you can stay at the lovely Inn there or find accomodations in San Simeon and go see Hearst Castle and really make a weekend of it. I would not recommend Lompoc--not much there except VandenBerg AFB-- which my former rocket scientist dd says is really rather dead. But then I don't live there and maybe the residents will be unhappy with me for saying that.

You see, this is why I have resisting the siren call of the spinners. I have a hard enough time restraining myself from buying too much yarn. If I knew how to spin...? Oh, the thought is just too scary.

whoa baby, off to the dark side in a rocket ship, never mind a handbasket. Wait til Rabbitch gets a look at this post.

At least we're headed in this direction together. (What will happen if/when one of us is seized with a mad desire for a knitting tattoo?)

Or a 'spinning tattoo'? oh yeah.

my my, yarn that gorgeous and red.. I can well imagine it being hard to resist :^)

That's it. I need to find a spinner around here for a lesson!

If I were you? I'd start checking around for wheels.....

uh oh, I don't think you impulse buy spinning wheels. I think you have to "research" that and try out a bunch of them and then buy one. If you've tried out a few can it really be called impulse? NO. Its an informed decision. Do I need to start selling roving?? Or sending you some to spin for me??

Bea has the right idea. Not an impulse buy at all. And you can take a long time playing (excuse me, that should be 'researching') different wheels.

But, First, back to the alpaca!

The store where I bought my wheel would rent one to you for 30-90 days and if you bought the same wheel the rental would go toward the price of the wheel. Now that was a dangerous hill to slide down into spinning wheel love and indecision.

I decided that no matter what, there's not enough time for everything I want to knit, let alone try to learn to spin. Case closed for me.
But I'm not going to try to influence you in any way!
*wink*
(((hugs)))

its like a fun park, a steep and slippery slope into the wilder side of fiber things, this spinning lark, once you slip over the edge, you can try and flatten and slow your self down, dig your heels in, but gravity has a way of pulling you down that slide

With only 2 projects and a little spinning on the side, there is not to much on the go at all there ... Do you need more enabling (roving?)

I would say "tsk" but as a fibre pusher I quite frankly couldn't be more delighted, m'dear.

The yarn looks good ... and excellent use of one of my all-time favourite words, "turpitude".

Ooh. I think I know what my next colourway will be called ...

Learning to spin has to be one of the greatest delights in this universe. Do it! Get a wheel!

To spin or not to spin. I know that my life is already careening out of control and I just won't let myself consider it. I am trying to look at it like I do my buying a farm share from a local farmer instead of growing all those onions myself - I am getting closer to the (sacred) reality of my food by cooking more of it from whole vegetables, and I am getting closer to the reality of clothing myself by knitting more and more of it. I'll support the spinner just like I support the farmer, and the world is a better place.

There is always somethng new to try calling to us crafty people....it is hard to not get sucked it!!!