This is the post that almost didn't happen. There was no time during the day to take a break and post, and when I got home after taking Older Daughter to chess club and Younger Daughter to Irish dance, there was dinner to make, and homework to be done, and valentines to be made (the girls are required to bring only homemade valentines to class, and must bring one for each person). By the time I sat down to turn on my computer, I discovered that the internet wasn't working. I rebooted, checked the modem, and generally did what I know how to do, and then gave up until Rick could get home. He rebooted the computer and the modem, and finally gave up and called Cox. An hour later, we'd figured out that it was the wireless modem, and, after more rebooting and reconfiguring, managed to convince my computer to allow me to plug in to the modem. This means that I am now crouched over my computer, hardwired in to various electronic items the precise function of which I am unsure.

I then logged on to blogger, told it that I wanted to start a new post, and it froze and gave me an error message. I was starting to think that this post was not meant to be, but I seem to have caught a break, so here I go.

Look! A whole pair of socks! 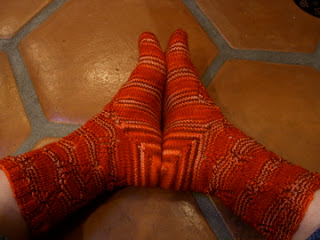 I hereby confess that I not only wore them to work today, I also planned an entire outfit around them. (Someone in my knitting group said to me: "Your new socks match your outfit!", to which I responded, "No, my outfit matches my new socks." Does this mean I'm weird?)

I'm very happy with these, and am hoping that the yarn fares better than the other pair I knitted for myself some time ago which, for no readily discernible reason, fulled. Rick's pair hasn't, so I don't know why mine did, but suffice it to say that they now reside in Younger Daughter's drawer. While I like the look of the star toe on these, I've come to the conclusion that star-shaped toes don't work on my feet as well as a wider toe, as I have extremely wide feet (there are those who would say that they resemble the feet of a duck, to which I just respond that I don't fall over easily). But this is exactly why I joined the sock club: to have a chance to try pattern elements that I might not otherwise knit, so that I have a good sense of the possibilities out there.

To recap, these are the first installment of the Rockin' Sock Club, in a pattern called Serendipity, designed by Adrienne; the pattern goes perfectly with the colorway, which is called Dragon Dance. I knitted them on my size one Celtic Swan dpns.

Because I'd finished these last night while watching the first half of the Westminster dog show (I had to stay up 'til the end to see the herding dogs, which are some of my very favorite dog breeds in the world)(at least, my favorite dog breeds besides mutt, as I was careful to explain to Kia Ora, who watched with me), I was able to work on Gust today during knitting group, and while waiting for Younger Daughter to finish dancing. I'm more than a third of the way done. 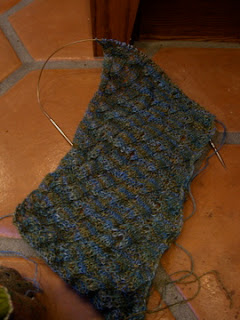 I'm dying to see this blocked out; the pattern is so perfectly geometric, and such a nice counterpoint to the flowing colors and texture of the yarn. I can tell this is going to be one of those things that I take everywhere, because it's the right weight and goes with so much of what I wear.

On the non-knitting front, things at work are still insane, which I'm finding stressful. There's nothing worse than having no time in the office, and every time I have a second, finding forty new email messages waiting for me (I should say here that it's only the work emails that get me down; finding one in there from one of you out there in the real world is like finding a bit of gold among the dross). And of course the chaos means that, just as I feared, while I finished my knitting for the Loopy Swap ages ago, the mailing dates are between the tenth and the fifteenth, which falls this week, mid-insanity. I knew, just knew, that not being able to mail it right away immediately diminished the chances that I'd actually get to mail the package on time. And here I am, in the target week, with not a single space of time to get the box packed. I've got it scheduled into Thursday afternoon, and I can only hope that something doesn't come up during that time.

On a bright note, though, we had what I can only call a perfect early spring meal on Sunday (it is after Imbolc, and therefore counts as early spring in my book). Rick grilled lamb chops, as well as fresh baby brussels sprouts from the farmer's market tossed in walnut oil, with toasted chopped walnuts on top (thanks to Juno's blog for the idea). I steamed fresh English peas (my very favorite treat from the spring farmer's market), tossed with a bit of butter and salt and pepper, and then made polenta to go with. Perfect. The only thing that could have made it any better would have been if I'd had time to let the polenta set so it could be grilled, too. I do so love me a springtime farmer's market.

Thank you all so much for the encouragement and support around my public panic attack about Older Daughter's move to a new school. It really does help to hear unequivocal support, or at least a strong statement that while choices may change, caring about my parenting is a solid step in the right direction. We're all going to the open house at the new school tomorrow night, and Older Daughter is excited, which is all I can ask.
Posted by Knitting Linguist at 8:25 PM

The socks are awesome. I hope they wear very well for you. Sounds like you are having some crazy times right now. I'm sure your swap partner will understand.

The new socks are gorgeous... am I the only one wishing there were a photo of socks AND outfit? :^)

I want to see a picture of the outfit too. The socks are gorgeous (and fir the Project Spectrum February theme perfectly, by the way).

It's monsooning here, and I was thinking of you as I went to the post office with my LS package in the only block of time available for mailing this week!

Hang in there. We're all rooting for you -- and this craziness will just be followed by the next. We might as well find the good therein (you have tenure, and yummy yarn ...)

Beautiful socks! And no you are not weird to have planned your outfit around them. They are, as they say on Project Runway, "fierce" and require a fierce outfit to show them off :) I hear you on the e-mail. Hang in there!

Congrats on the finished pair and complete outfit! Personally, your pics always make me homesick - I grew up in Arizona and your tile just makes me want to be there again. [le sigh]
I'd like to echo PhD Knitter's comment about the email. It haunts me. I don't even want to think about the fact that I've been pretending my phone isn't ringing for at least 48 hours. [mad cackle]

I plan my outfits around my socks all the time ;-) Especially this past week here in Chicago when it's been less than 20 all the time and often less than 0 wind chill. My hand-knitted socks are all that is getting me through the week.

Planning an outfit around those socks is no weirder than planning a meal around a really good wine. And that isn't weird at all.

It was a very spring-y weekend up here too. Gorgeous weather, but not quite the produce yet. Then again, I was wallowing in illness and didn't go to the market.

Why yes, I DO plan my outfits around my socks! (and my NON-knitting friends notice!)
;)
Gust is gorgeous, and I'm so envious of that early spring meal!
(((hugs)))

The socks really are cute! I like kitchenered toes for my super wide feet or toe up.

Aw darn. I mised handing out parental advice, my favorite thing, not being a parent. Best way to be sure, y'know!

The socks are beautiful and the springtime feast sounds WONDERFUL. We'll have one just like it - in about 3 months, when spring will finally come to Minneapolis. At least the lamb is already in the freezer (from a friend's farm), but we won't be seeing any fresh vegetables for a long time. Of course, we won't be seeing any mudslides, either, so I should be satisfied with what I have.

I love those socks. I'm not a big orange-red person usually, but I really like the way those colors work together. And the stripes are perfect!

Dinner sounded wonderful. I must hie me to the farmer's market this weekend; we've been a bit short on the cooking lately, with our own dose of mid-quarter craziness. I hope your work madness gets a little more manageable...the mid-quarter crunch always hurts!

I am the kind of person who once made an entire outfit for my daughter (complete with hair ribbons) because I found a pair of cute peach lace knee socks on the bargain counter.
Your socks look great, and I do love the Dragon Dance colorway, too. I just can't use it for socks. Mine might become a baby sweater for the newest grand-veggie! (We think he's going to be a Tater; we have a Sweet Pea and a Grandcarrot already.)