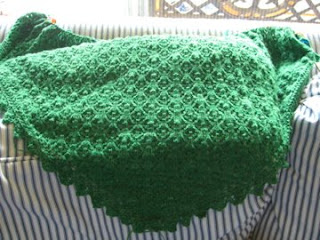 Does it look any bigger? It is, honestly. I'm now done with seven repeats, and into the eighth, so I'm getting there. I knitted at it a bit at a time today, in between loads of laundry (ah, the joy of Sundays at home). Here's the body and the edging closer up. 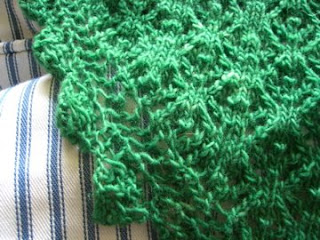 Patterns like this really suck me in. In 24 rows, the bigger motif repeats twice, and the smaller three times, and 24 rows feels like a really approachable number, especially as I've split them into four row sections on my chart with pencil lines. So I knit one RS row, and then of course, I have to knit the corresponding WS row, and then I notice that I'm only two more rows away from finishing a 4-row section, so I get those next two done, and then hey, look how far I've come, better do one more RS row and then... Well, you get the picture. Apparently I'm easily amused.

I've also been spinning this week, working on the Linguistic roving that Rabbitch dyed for me. Sitting down at the wheel for short periods of time is starting to feel easier, as it no longer takes quite so long for me to settle in. 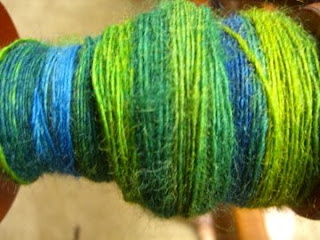 What do you think? Aren't the colors amazing? They really are that vibrant, and there's an amazing royal blue in there, too, that you can't see so well in this shot. I'll be spinning another bobbin full with the second half of the roving, and then plying them together. I can't wait to see how it turns out.

In other news, it would appear that it's a good rattlesnake year here. In all the years I've lived and hiked in California (that would be my whole life, now I come to think of it), I have only ever seen two rattlesnakes, one in Simi Valley, and one in Big Sur. On Friday, I doubled that number. Rick and I took the dogs hiking while the girls had their piano lesson, and we saw two big fat rattlers on the trail. Neither of them could be bothered to even rattle at us, although their rattles were clearly visible, as were the diamonds on their backs, and their triangle-shaped heads. Tilly almost stepped on the first one, which was coiled up on the side of the trail (all 3 1/2 feet of him), and Rick saw the second across the trail before we got too close. Luckily, Kia has never been much of a dog for chasing wildlife, and Tilly didn't seem interested, but we're seriously thinking of enrolling in one of those rattlesnake-avoidance classes as part of her training. Laura pointed out yesterday that it's a big rabbit year, which usually means a rise in rattlesnakes and coyotes, and both of those snakes looked fat and well-fed, so I think we'll need to start being even more careful than we usually are.

Tonight, Rick and I get to go out for dinner -- a date! We're off very soon; an evening out the two of us is a rare and precious commodity, so I'm looking forward to it. And then on to the last week of classes before finals. Almost there...
Posted by Knitting Linguist at 4:40 PM

What do you mean? I see a big change from the last photos you post of your green beauty! Scroll down and see for yourself. I really like the close up as it shows me how the pattern comes out (I know it only on paper).
Rabbitch colours are amazing I think it is going to be a beautiful yarn.
I only saw a rattlesnake on my plate when Joe made me try it in some local cowboy place (I am almost sure it was chicken!)
I hope you had a great date! We are going out soon too.

The shawl is really beautiful. Not much for snakes. Happy we don't see them very often. Have fun on your date!

Hi, My name is Jan and I have a Caribbean color addiction. (Hi, Jan!) I would SO be tempted to buy that yarn if you were to put it up for sale. The colors are perfect.

I'm sure glad those diamond-backs weren't interested in you!

Closer and closer all the time!

Those colors are amazing.

Rattlesnakes, yuck. I hope ours stay far back in the hills.

I love the shawl. It's growing nicely. And it sounds like just the kind of pattern to suck me in, too. Except when the rows are longer, I'm happy to finish one row in a sitting. (I knit in little bits and pieces most of the time)

I'm remembering some snake stories. Too close for comfort. I like this nice, chilly Bay Area.

You live where there are rattle snakes? and then I remember I live in a country with no predators (sharks don't count), and so snakes seem so scary. Love the spinning - so even - nice. Stella

Thank you for your kind words about staring at lace charts; I found them hugely reassuring. And that Linguistic roving looks heavenly, all the best colours.

I could see some growth on the shawl also and what a Beauty! Your spinning... looking beyond great! Really looking forward to seeing it plied.

Rattlesnakes... yargh. but.... I do happen to like snakes but some I'd rather not get too well acquainted with.

I was just over to Anne's and saw the photo with you, Kim, and Laurie, how old did you say you were? 25? Lovely!

Aw, enjoy your date! Sounds like you'll have fun, whatever it is you choose to do. :)

Your shawl is coming along beautifully. I love the color. I have to say, though, that I'm even more stunned by your spinning. Too beautiful! I can't WAIT to see the finished yarn. Can that roving be bought? It's worth learning to spin for!

I'm so glad you had such a nice visit with Anne, what fun!!

I'm terrified of snakes - that makes me think twice about getting on the plane in a few weeks!! ACK!

Doesn't living where there are rattlesnakes make you feel a bit more alive?

The shawl is way bigger and the spinning is luscious. And "Tilly" is a great nickname, but I still like "Stumpy".

Yes, you're almost done! I know because it's all MamaMia and The Professor talk about!

I was in Acton yesterday at a bridal shower and on the way back to the 14 fwy I almost ran over a yellow and black banded snake on the road. I wonder what kind it was... Please be careful. Now I will freak out and limit myself to beach walks. I'm not afraid of much anything EXCEPT snakes.

Oh, and the spinning looks very even. Good work!

Lace is like that, isn't it? Nothing, nothing, nothing, and then suddenly, it's done! I love patterns with little goals to be met; it really does help to move things along.

Rattlesnakes and scorpions are two things that I am very glad not to have in my neighborhood! Sounds like that snake avoidance class might be a really good idea...

Hope you enjoyed your date!