Because the last two days have gone too quickly!

Friday's dinner turned out beautifully. The baguettes were yummy; I really have to get in the habit of baking bread again, as I like it so much better than anything I can get elsewhere, even at the farmer's market (of course, maybe that's a reason not to bake more often...). And the girls both asked if I'd please make the turnip/carrot soup again. (hello? children? turnips? hmmm...)

This weekend was designated a "get things done" weekend. To that end, Rick started, and finished, his big job, which was to build a wall unit of cubbyholes for the girls' playroom (this was once Younger Daughter's bedroom, until the girls decided years ago that they'd rather share a bedroom, at which time it became their playroom)(mostly, we just call it Chaos Central, hence the cubbies). He'd priced out pre-made units, and they were outrageously expensive, so he decided some time ago that he'd build one himself. And so he did. 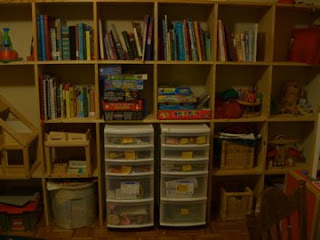 That's only part of the unit, but isn't it great? He built it with special spaces for their tabourets, and for the dollhouse, and everything. I was impressed.

Of course, that took the better part of the past two days. We did manage to get a hike in this morning. The weather has stayed cool enough that I'm feeling compelled to spend as much time hiking as I can before it's too hot to be fun on the trails. The wildflowers are blooming, and the dogs came home smelling of sage. 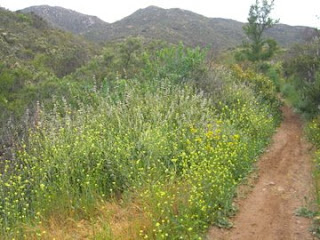 I need to see if I can find some of these to grow on our back hill. 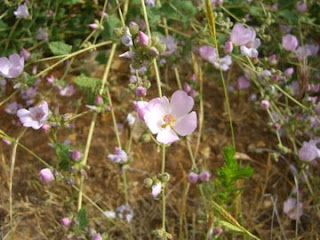 The girls and the dogs ran amok, which was precisely the point. 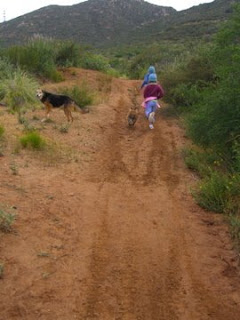 I did some more baking today. Blueberry squares with a crumble top to take to dinner with some friends, and a big batch of ginger/almond granola, which Rick had been requesting. I also got some bookshelves to put in the den for yarn storage. I figured maybe it was time to start getting organized for a summer of knitting.

And in all of this, I got some spinning done. I'm almost done plying the Linguistic roving from Rabbitch, and have about 300 yards so far. I overplied the first skein, but I think I've corrected fairly well in the second. 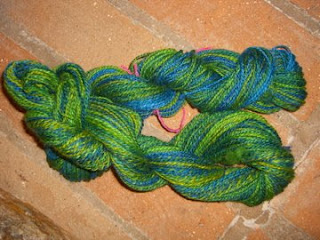 The blues aren't showing up very well under the flash; you can see the colors better in some of the pictures of the singles I've posted before. I'll be using this yarn to knit a pair of mitts for Older Daughter. I'm pleased with the way it's turned out; my yarn is starting to look more and more like yarn. This has come in between 16 and 18 wpi, and seems to be a slightly thick fingering weight yarn. It's not entirely even yet, but so much better than my earlier efforts! I don't think I'm going to be in the least embarrassed to have Older Daughter wearing this out in public (although I admit that there is a small selfish part of me that hopes that she doesn't like the mitts so I can have them; this colorway spun up beautifully).

Tomorrow, we'll be assembling bookshelves, and getting the guest room ready for our various parents to come visiting sequentially in the next week or so. I'm starting to feel like my summer is disappearing already, and it hasn't even started yet. I know that I won't feel quite so much like that once this conference paper is written and I've been to my workshop in June and come back, but until then, there's a lot that has to happen.
Posted by Knitting Linguist at 9:16 PM

I think I have cubby envy. I need a way to organize my craft room, and I must say that your girls' new shelf system has me thinking...

Hope you enjoy the rest of your three-day weekend!

Love the cubby. He did a stupendous job. The first thing I noticed was the spaces for stuff like the doll house! How cool.

Wish it was cool enough for us to take a hike. About 95 in the shade yesterday.

Your spinning is coming along really well. That blue green is pretty and looks EXACTLY like yarn!

Whew, I definitely have cubby envy. And yarn envy, too, as the green-blue looks very beautiful on my monitor. Spinners awe me.

LOVE the shelving! Definitely the way to go and how wonderful and talented your MOTH (Man Of The House) is.

Whew, you ARE going to be busy.
Enjoy today :^) (I'm also baking some blueberry somethings today ;^)

Oh, I hate that feeling of "the summer is almost over" even before we finish Memorial Day weekend! And this year Memorial Day is even early, but I have already had a pang of it, too.

I think I need to review former posts for that soup recipe. If it works for kids, it may work for husbands.

And the yarn is looking FABULOUS.

You are both quite the handy folks. While my husband won't be building any cubbies anytime soon (not even assembling premade), he is a whiz with anything computer, so that is pretty good, too.

Your hubby did a great job on the cubbies. Lucky girls to have such a talented daddy.

Loved the pictures of the red earth trails, grass and flowers.

The cubbies look great. Is Rick available to help with kitchen shelves too? That's my big unresolved wish for the summer project season.

wow, i wish i had gotten that much done this weekend! i'm feeling a huge need to organize teh mess that is my workroom, but i have to wait til after the garden is completely in the ground.

Here I am at the near end of the third day of our weekend. I am definitely NOT ready to go back to school tomorrow!

All I got done at home was laundry and laundry. We were gone to the Beach Cities for two days.

May I borrow the carpenter for a really quick cubby job in the shed?

Loved Willow's comment...it has inspired a new euphemism..."borrowing the carpenter for a quick cubby job." Yes, I frequently embarrass Ellen.

The yarn is gorgeous...I think I said how much I love the colorway before. And you've made me salivate for the baked goods as well!

Big cheers to your hubby for the cubby holes. They are great. Well done that man.

He did a great job! Whoohoo! Sorry you don't live closer and would be willing to rent him out!
:)
I am feeling the need to organize my space, too.
(sigh)
Will get there someday, I'm sure!
That granola recipe sounds wonderful!
(((Hugs)))

I love the cubby, that is great!