But before I go on, a mea culpa. Helen pointed out to me, quite rightly, that Old Maiden Aunt is not in England, it's in Scotland. Of course, I should have know this because a) the perfect heather shade of purple could only have come from someone living near actual heather (now that I look at it carefully, it really does resemble the color of heather even more than that of blackberries), and b) it was on the envelope. But really, who actually looks at the outside of a package bearing yarn? Don't you all just want to see what's inside?

That said, we're on to more knitting content. This past weekend finally felt like summer to me. I relaxed, listened to knitting podcasts and to my audiobook, and knitted and spun to my heart's content. We took Rick out to dinner on Saturday night at the Linkery, which we all, including the girls, agreed was excellent. It's on our "let's go back there" list, which is a good thing (it's also close to the zoo, making it a lovely option at the end of zoo trips). They even had a lovely hard cider, which can be hard to come by in restaurants, and so was a nice treat. With all of that time, I finished the mitts on Sunday morning, and they fit Older Daughter quite nicely. Here, the mitt is on my hand, as OD is at swim practice, and her hand is not available to me. 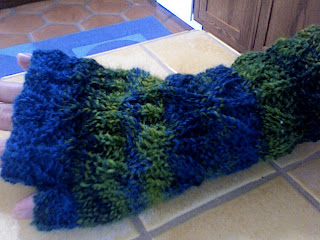 I also, finally (!!), was able to resume knitting on my pink and green socks. Except it turns out they're not for me. When I reduced the number of stitches for the ankle, I went a bit overboard (I was in a tense meeting at the time), and they are rather, well, stretched on my foot. I tried them on Older Daughter's foot, and they could fit her, but it turns out (as we discovered today when we went to REI to buy her hiking boots for our trip) that she wears the same size shoe that I do. Seriously. (Hold me, I'm scared.) So now I'm thinking that maybe these socks will be for Younger Daughter, both because she can wear them longer, and because she deserves something for her tremendous forbearance with regard to this trip we're taking. They'll probably be a bit big on her, but that'll be good. I can try them on her foot when they get home tonight, and I'm guessing that, if I've eyeballed it right, I can finish off the first one tonight and cast on for the second.

Upon getting back to these socks, I finally realized what was driving me nuts about them: they're knit on size zero needles, and it turns out that I don't like knitting socks on size zero needles. Size ones are great; my favorite sock needles in the world are my size one Celtic Swan needles (any thoughts on whether I'll be able to get them on a plane?). And I don't think it's because the wood needles feel a bit flexy in my hands; I think it's that they feel fiddly and small, and I don't enjoy feeling like I have to fiddle with my needles. I'm guessing (and am I the only person out there who has to guess at her own motivations?) that this is what's stopped me from finishing the Boudica socks that I love so much; they're knit on size zeros, too. I'm hoping that this summer I can a) work up the motivation to finish the Boudica socks, and b) promise myself to never again buy sock yarn that needs to be knit on size zero needles.

In any case, I am so happy to be getting back to sock knitting, I can't tell you. I'm participating in Summer of Socks 2008, although I know that these socks can't count, as they were started before the Solstice. I'm not competing in the "most socks knit" category, though (must be realistic), so I figure that's OK. I am going to try for the "best travelled" socks instead, and take lots of pictures of my socks in New Zealand. (Heck, American tourists get a bad rap anyway, why not be seen taking pictures of socks in scenic places?)

If I can get these done this week, then I'll be feeling pretty good about my WIP pile, which will be reduced to two (that I will admit to): the baby jacket, and the Hanami stole. I'm not taking either of those with me on this trip, as I think that beads and airplanes do not mix, and I want four fresh, lightweight projects. I've been working on a plan for the SeaSilk that I bought, and have chosen

(Blogger has eaten half my post; from here on out, it's a reconstruction. Sigh. You should all know that the lost post was witty and well-written beyond belief. I'm sorry that I wasn't able to capture the original excellence in this rewrite; you'll just have to take my word for it.)

a couple of lace motifs that I think will go well together; I need to graph them out and see how they look. And then I suppose that I really should swatch them; it kills me to do anything with this yarn but use it all up on my scarf, but I know that I ought to. I went out today and bought the first Barbara Walker treasury (I had the second), and am looking through it, too, just to see if there's anything I missed (snort).

So that'll be the first project I bring. The second will be a pair of socks (really and truly for me this time) that I want to knit with a stitch motif that I've had my eye on for a while; nothing fancy, but I think they'll turn out well. Then I'll bring one of my STR sock club socks, and the Noro yarn to make a half-pi shawl as my third and fourth projects (I'd hate to run out). I really love the half-pi that Gwen made; I'm hoping I'll be able to conceptualize what's going on with that pattern to get it without too much trouble. I'll try to take some pictures of yarn and motifs tomorrow to share.

So, now that I've got the important stuff settled, I suppose I should try to figure out what I'm actually going to wear on this trip. What do you think?
Posted by Knitting Linguist at 6:24 PM

Something peculiar has happened, as your photo seems to be missing and you've ended partway through a sentence... I am sure it's Blogger's fault.

Oh dear, what will I do when you are far away from regular Internet access?

I need to start a sock soon since a) I haven't done a pair in forever and b) I did sign up for the socks of summer 2008....so I better start a pair. Safe to say I won't be competing for any prizes for most socks LOL

Sounds like you'll be busy! I love the colors on the mitts, and I can't wait to see your plans for the pi shawl and the SeaSilk. Enjoy Walker!

Those mitts are amazing, the colours are gorgeous

Ah, you'll come up with something good! For your socks (on size 1 of course) and your Seasilk and your Noro.

I suppose you'll figure out the clothes, too, eventually.

I'm just catching up - what is the conference? Where in Wellington will you be? When do you go?

wearing on the trip, well NZ is in the grips of an icey blast, so for the conference professional and warm is a must. Remember NZders dont' to to much polish, so you don't need to trowel on the make up or jewellery or designer suits. For our(love that!) SI trip, casual and warm, and comfy. and sounds like you are making the leap to lace designer! graphing charts that go together, well done! cant wait. Stella