So, while I know I haven't been talking much about it during the update posts, I have been knitting and spinning, and things are actually being completed around here. I finished the pair of socks I was working on during the trip, and I'm quite pleased with the way they turned out. I knitted them for me and they ended up fitting me, to Younger Daughter's disappointment (after the last disaster with sizing socks, I think she's started hoping that I'll misjudge my gauge all the time; she asked me who the socks were for, and when I said they were for me, she said, "Really for you? Or knitted for you but they fit me?") (Where do you think she's picked up that little tendency towards sarcasm?) 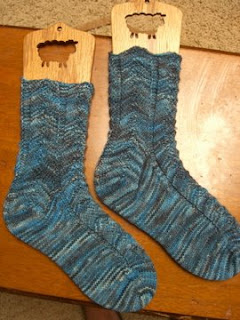 I used a stitch pattern from one of Barbara Walker's books, and installed it into a basic top-down sock recipe. Four panels of the pattern are separated by some purl stitches; two of the panels continued down the heel flap, and the other two down the instep to the toe. I'm pretty happy with the way they turned out (I'd had my eye on that motif for a while; it's a modified herringbone). 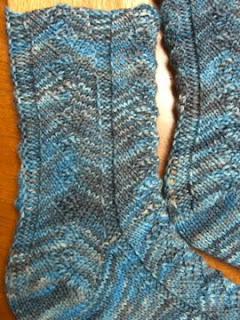 Since I liked the pointy bits at the tops of the columns, I didn't do a ribbed edging. As these are fairly short socks, they seem to be standing up just fine, so I'm guessing I won't miss the ribs too much. The yarn is Yarn Nerd 850 Mhz Merino (got it at the Loopy Ewe), in the Denim Blues colorway, which I absolutely adore. It ranges from slate blue to a robin's egg blue, and every shade in there is on my palette of favorite blues. The yarn itself was wonderful to knit with (and I have plenty left over -- I could have made these much longer), and I will most definitely be getting more of it (note to self: put some on my wish list at the Loopy Ewe). I used the size 1.5 Harmony sock dpns, which were plenty pointy for the p3togs in the pattern.

I've also been working on this, which is my current "mindless knitting" project. You know the kind: the one you can knit while you're reading, or talking when you need to be able to actually look at the other person most of the time. Since every row is knit, and the yo rows are coming further and further apart, it's great for just zoning out. 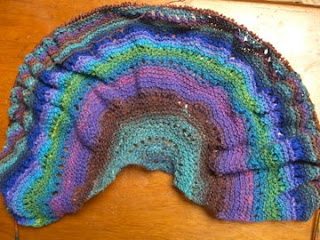 This is the Noro sock yarn that a friend in my knitting group gave me, worked up in a half-pi shawl. There's a great deal of winging it going on here, and adding of k2tog, yo rows at random, which I think is part of what's making me happy with this; it's a make it up as I go sort of thing, which is fun.

And, finally, I've been spinning during the Tour de France each evening (is anyone else having as much fun watching this year's Tour as I am?). This is some roving that Stella sent me earlier this spring that I'm spinning up on the Pipy. I'm almost done with the singles, and then will ply two singles together. I'm not sure what I'm going to knit with this one yet, although I'm considering another pair of mitts for Rick. On the other hand, it might make a nice butterfly shawl (from The Knitter's Book of Yarn); we'll see how I feel when it's done. 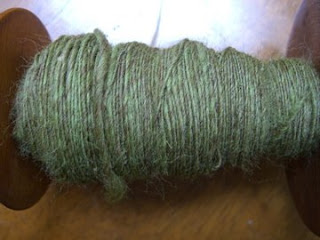 It's actually much more brown/sage than that, but you get the idea.

So, those are the active projects. This morning I'm thinking that I might, maybe, cast on the SeaSilk in the pattern I worked up for it, but then again, there are a couple of pairs of STR socks from the sock club waiting for me, and we all know that it's always good to have socks on the needles, but then again, maybe I should just finish spinning that roving? Always with the hard choices...
Posted by Knitting Linguist at 10:31 AM

What a great vacation, and with more stash at the end - even when you arrive home? Can't beat that! The socks look great and the shawl brings a smile to my face and seems like it would every time. :-)

Are you sure those socks won't fit me? :) Gorgeous.

GORgeous socks and good for you, getting them 'your' size ;^)

Your spun yarn is sooo pretty, and yes, it does indeed look more sage green with brown from where I'm sitting...

That shawl is all happy.

the herringbone pattern on those socks is awesome! i really need to get those walker treasuries. the sage color in your yarn is lovely too.

Poor you, such hard choices :) My mother would have told you: may these will be the hardest choices you ever need to take,,, LOL

I love your socks, the color is amazing and the pattern suites it perfectly.

Wow you've been busy! Everything looks wonderful. I love how your shawl is turning out!

Love the color and stitch pattern on the socks. And the handsun looks very pretty, too.

I love the socks...glad they fit you!

Oh, and that spinning! Love the colors!

It's good to know you're taking such good advantage of your summer vacation!

The socks are gorgeous, as is the spinning. I am envious of your wheels, given how much I'm loving the drop spindle.

Where do you recommend getting roving from? I got my Lorna's Laces roving from loopy ewe (the pictures are up on my blog by the way) but don't really know where else to get good stuff . . . Any tips would be appreciated.

Also, how do you ply using a handspindle? I am still trying to figure that out. Where should I look for tips?

Spin the roving, cast on the STR and start the SeaSilk. It's wrong to have single projects. They get lonely and spoiled and aren't socialized well.

The spinning came out nicely! I'd love to see the actual color, that color is pretty nice. Cute socks! Isn't it fun to tweak a pattern and have it come out beautifully?

Younger Daughter must get it from her father. Sarcasm? Where else? ;)

i'm just catching up now - those socks look fabulous, i understand YD's desire for them to fit her not you. I also caught the previous post - the wheel looks great, no bits left over and everything seems the right way up. Let me know if the bobbins are stiff on the spindle - there is a trick with that I'm not sure I included. Facilitator sounds right to me (I did say you could if you wanted sell the wheel to finance another desire- and I did mean it). I was facilitated into spinning by Chris and latter by some lovely guild ladies- some who didn't spin - but hooked me up with spinners, others who lead me to fiber ... it all helps.
I do like those socks - did I say that?
Stella,

Great sock pattern! And the handspun is a wonderful color. You are really getting it done.