I have been meaning to post for what feels like days, but whenever I get a spare moment that can be used for what I think of as the knitting part of my life, I am drawn, inexorably, to the Lacewing shawl. Of course, it's at that stage where, even with all of the knitting I've been doing on it, it doesn't look like I'm making much progress at all. 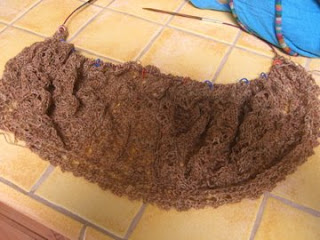 It is getting bigger, though, I swear. And I'm giddy like a schoolgirl with this thing, no joke. It's challenging, in the best possible way. I need to pay attention, which is wonderful and absorbing, like sight-reading a good piece of music. I did go through a small period during which I was convinced that one particular 32-stitch section was cursed; every time I finished knitting it, I'd check my stitch count, but by the time I got back to it, stitches were inexplicably missing. It was a Bermuda Triangle sort of thing, and I found it frustrating beyond belief (seriously, no-one should have to spend a good hour of knitting time fiddling with 32 stitches). On the other hand, it most certainly was an opportunity to hone my skills at reading my knitting, so that I could see where I'd gone wrong. See what I mean? Giddy. Gettin' jiggy with it. You know it's bad when even a cursed patch is a fun challenge. I guess I've been missing lace.

As I said, though, it's not something I can knit when I'm going to be interrupted much. I did manage an hour or so each morning this week, especially on those days when I dropped Older Daughter off for her two half-day orientations at her new school (they went swimmingly, btw, and she even declared herself "much less scared (but still a little scared)" to start in a few weeks; this is good news), and Younger Daughter played quietly in her room. However, there was no way I could knit this while taking the girls to see the American Girl movie (very nice period knitted sweaters) or when going to an afternoon meeting, so I worked on the half-pi shawl during those. I also can't knit Lacewing while playing games with the girls, so I've been knitting the Kimono socks from the most recent issue of Knitscene. 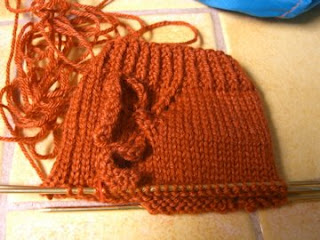 I decided to only do one of the cute little ties; one was good, two seemed like a bit much.

Have y'all seen the recently-inaugurated Twist Collective? Anne has an amazing pattern in there, and there's a pair of Cookie A. socks that I might have to buy the pattern for, as well. So much to knit, so little time.

In fact, I'd just managed to pack the girls and Rick off to this morning's market so I could have a little quiet knitting time (on Lacewing, what else?), when Older Daughter came running back in saying there was something I had to see, right now. So I ran outside to see, and by gorr, she was right. 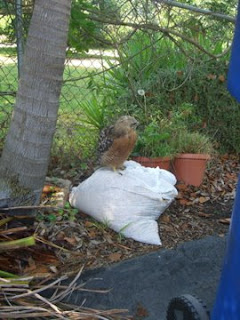 Do you see what's sitting there on a bag of guinea pig litter that the girls forgot to put in the garbage can? 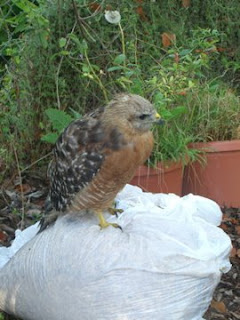 Yup, a hawk (Sharp-shin, I think, although maybe a Cooper's). It didn't seem at all inclined to fly away, which made me nervous, so we trapped all of our animals in the house, and I started calling around to see who could come and rescue her from us, because there was no way on this green earth that I was going to try to capture that hawk; it may not have been flying, but the beak and claws all seemed in working order. I spent a solid half an hour on the phone, and had just gotten someone to give me a phone number to call, when she flew away. She only got as far as the lower branches of our oak tree, where she sits even now, so I am still a bit concerned, but I'll keep an eye on her. Meanwhile, I'm off to knit some more.
Posted by Knitting Linguist at 10:52 AM

The hawk looks beautiful-hope you enjoyed your quiet knitting timeo

It does seem odd that the hawk is staying so close by. Is there a Raptor Center in your area? They might have advice.

Oh, and yes, there was lots to drool for in the premier Twist. I just dropped my subscription to Knitter's - too many patterns that just struck me as odd for odd's sake - so I wonder if I can justify spending saved money on a pattern or two every issue. Probably can, and likely will!

Fascinating hawk. I hope it's ok.

Cute hawk. Hope you had a lovely knitting time. My knitting this weekend has all been given over to a repeating sock! [frog - reknit - frog - reknit]

WOW... Very Cool, the hawk, and I SO hope she's alright, keep us posted. I saw a young redtail in my backyard, perched in a redbud tree, fairly closer to ground than you usually see them, we checked each other out for a few minutes and it then flew off.
Your lace is gorgeous!
Yes, Twist! Gnarled Oak is yet another Stunner. The one I fell down hard for? Wisteria. Must make it.

You're lucky you had your camera nearby, so you could grab a picture of the handsome guy-girl! Yes, Twist Collective is going to be addictive. I bought two patterns the first day! Anne's, Cookie's knee-hi's, and two sweaters. I love Anne's shawl, and by the way, the Lacewing you're test-knitting is very lovely! I've read Anne's blog for years, but I don't think I've ever posted here. I enjoy your blog!

oh that twist collective, those socks are so darn tempting, cookie is one clever cookie, and btw I love the lace, and the reason i am tempted to knit lace is much of the the yummy lace you knit. I also have wandered lost and confused many times in the valley of the knitting Bermuda Triangle where missing or to many stitches abound. But there is a certain euphoria or sweet joy in it working out that is almost enough to cancel out the frustration.

Love the lacewing! And you know, I'm not all that much of a hawk fan. I do hope your's is okay, but I'm the sort who wishes they'd stay BACK from my space (I know, it used to be their space!).

The hawk is neat. I hope he's fine. I have a young rabbit that has moved in to my meager lawn. I love watching him (her?). So cute! I like hawks even better, though.

that twist collective is a truely dangerous thing. wasn't my queue long enough already? since there's nothing i can do about it, i might as well enjoy it :) i keep meaning to post too, but time disappears on me. and of course i'd rather knit an hour than fuss with posting.

I hope the hawk is okay but also that she takes off soon. They're beautiful but they make me nervous for the cats in the neighborhood.

No one but knitters really understand that cursed learning is fun! Eventually.

What projects of Anne's aren't amazing?

Lots of projects! I'm glad you're enjoying the obsessiveness of lace. The amazing thing is that you're getting other things done at the same time.

Hope your hawk doesn't hang around too much longer; I agree that it's not a good sign, especially near the ground like that.

Knitting time is such precious time so enjoy every moment. It's looking good. Hope the hawk finds it's home. What a fab photo