Older Daughter started middle school this morning. It's hard to believe that it's come so fast. Of course, as a friend pointed out, it makes a difference that she's young for her grade and that middle school around here starts in sixth grade, instead of the seventh/eighth grade junior high of my youth, but still. She was excited and nervous this morning, with nerves starting to predominate as we drove over there, especially when we hit the drop-off traffic that we haven't been facing on our summertime visits. She kept asking why I couldn't drive to the right of all the cars to go around them, and I had to explain why it's illegal to drive on the shoulder. Heh.

Of course, the day involved all the usual first-day-of-school mishaps. I'd gotten her safely dropped off and was on my way to get a cup of coffee before Younger Daughter's soccer camp started when I got a call from Rick saying that Older Daughter had forgotten her lunch, and Younger Daughter had forgotten her sunscreen. Luckily, there was plenty of time before camp started to meet up with him and get those things. I spent the two hours of Younger Daughter's camp working on Lacewing (a treat to myself this morning, and one I think I richly deserved) before gathering her up and feeding her lunch in time to get back to Older Daughter's school at the beginning of her lunchtime to deliver her lunch (this is not, I repeat not, going to be a habit, but I figure the first day of middle school deserves a bit of consideration). I will be going back there in an hour or so to deliver her violin, as she didn't have a place to put it yet since orchestra is meeting for the first time today, and then I will be going back to get her. Younger Daughter also has soccer tonight.

This morning, when the girls got into the car, one of them said to the other (and I would swear that they did not even begin to grasp the irony of this): "Let's pretend this is a taxi cab!"

"Pretend, my left buttock," I politely failed to say out loud. I may have cackled a little maniacally, though.

Still and yet, it was a pretty big thing to watch Older Daughter, lugging a backpack that seemed very big, trundling across her new campus to her classroom first thing this morning. She looked older, which I'm sure was my imagination, and which may have had something to do with the new middle-school clothes (I'm so used to a uniform): khakis, converse, and those layers and layers of tops that kids seem to find so nifty these days. Who knew that she knew what to wear? Who knew that she could look so confident, even when I know she was just dying of nerves inside? It's a pretty amazing thing to watch one's child walk away from one, into the next adventure, looking collected and easy while doing it. I'm glad that this is still a relatively small adventure, not yet involving things like dormitories and moves away. That will come soon enough, and for now I'm enjoying the feeling of seeing more of who and what she is as she faces this challenge.

Meanwhile, middle school prep and the Olympics, and days at the beach (did I mention we spent all day Sunday lazing at the beach? why don't we do that more often?) notwithstanding, I have been knitting. I finished this: 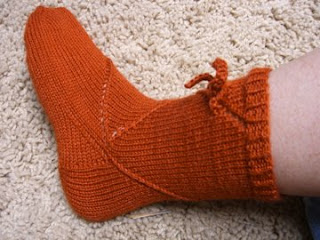 and am about halfway down the leg of the second sock. It was awkward getting a picture of this one myself, as it really deserves a front shot, but I got a few angles. 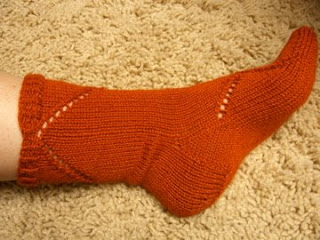 These Kimono Socks (this summer's Knitscene) have been an excellent Olympics-watching project, as it's impossible for me to knit Lacewing while watching a close finish, and there have been plenty of those in this year's Games. However, work has continued on the shawl, which has now morphed into The Blob That Ate Manhattan, as you can see. 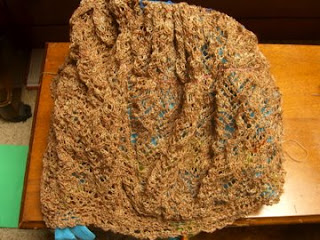 In that picture, it's eating my knitting bag for dessert. I'm about halfway through with the last body repeat, so I'm hoping to move on to the insect band (which I adore) by the end of the week sometime; after that, it's just the edging, and edging is fun stuff. 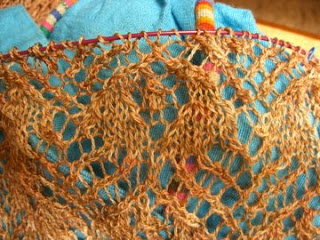 I feel like I'm getting to what I think of as the downhill side of this piece. Right about this point in a knit, when I am finishing parts, I feel like I'm sliding towards the end, faster and faster; it's a fun feeling, and very motivational. Clearly, this silly and deceptive sense of speed is purely psychological, given that this shawl is getting bigger with every row, and rows are now taking closer to half and hour each, rather than fifteen minutes, but I'm glad of it. Listening to Pillars of the Earth doesn't hurt, either.

The rest of this week will be devoted to finishing up my syllabi, which are starting to come together, and to figuring out some kind of routine with all of the kids' activities before Younger Daughter and I both start back to school. I'm sure I'll find some time to knit in there somewhere...
Posted by Knitting Linguist at 1:29 PM

the kimono socks look really good. i've got to get a copy of knitscene before they disappear. you described the home stretch of a project so well - but didn't mention how one's mind turns to the hundreds of projects in the queue :) at least, that's what i do. and i get so convinced by that psychological feeling that it's going faster that i keep expecting myself to be done, like, yesterday, and how can i still be knitting that thing? i get a good laugh at myself out of it.

wish T all the best from all us here, especially my T. Lace looks fantastic - i almost stopped breathing when I read the post about the extreme repair - well done, both of you.

Another of those "swallow hard and smile" moments we mums endure! Bittersweet indeed!

Such a pretty little sock and your huge blob of lace is impressive! I feel the same way, getting to certain points on a lace project and thinking 'won't be long now' then I remember, oh yeah, and then there's that bind off!

Knitting is an important part of the routine. I look forward to Lacewing. Wish I was working on it.

As I harried my child out to the car this morning, I realized he starts school Monday and I've got to get our Actual leave time about 30 minutes earlier. I've (threatened him) given him the options of the timer or incessant maternal nagging and fussing. He said I'd probably forget the timer.

A taxi cab!! Whoot! So true...and out of the mouths of babes!

I'm so in love with Lacewing...but then has there been a pattern that Anne's designed yet that I didn't love? Don't think so...

How did Oldest Daughter survive 1st day? What a huge day in one's life. 1st events of 'tween years are in some ways more nerve wracking than going off to college.

Did she mind your delivering her lunch and violin?

I'm still reeling over the fact that many states have begun school already. Oregon still waits until after Labor Day. The down side, they don't let out until the 2nd week of June.

Maybe you'll find time to knit while your taxicab is waiting for its unpaying fares? :)

Lacewing is pretty! Even mostly unblocked. Those socks are darling.

I'm totally the opposite. The closer I get to finishing, the more I drag my heels.

Notwithstanding that the blog looks hungry, it is beautiful. The knitting is well done and the stitches look nice and even. Isn't it fun to see how much you've done already?

How well I remember MamaMia's first day of high school, which was also her first day ever of 'real school' since I had homeschooled her through grade 8. The look of sheer terror, the deer in the headlights stare, the 'please don't make me do this, Mom, just because I begged to go to school and I know I'll eventually like this' panicked gaze as she clutched the doorknob. She did do well and the time flew by and now she's a graduating college senior. (Not that thinking about your middle schooler graduating from college gives you comfort...)

Sounds like a busy day! I hope Older Daughter enjoyed her first day in the new school, despite the hiccups.

That shawl is really coming along. Can't wait to see it all blocked out. =)

Oh, all the little recognizable emotions in this post! Bittersweet now for you, to see OD walk into the world of middle school, but it will be so sweet to remember when you get a gift like you gave me today, bringing back these memories. It is a hard time she is entering, but so rich and good, too, with growth and discovery.

And the fun at the construction of the socks and the music of the lace - great emotions to recall, too, and nice to know I can actually experience those in real time again and again. Thanks!

Tonight my son and husband both went off to camp, leaving me home with the dogs.

I'm looking at the bright side (a whole week where no one will pee on the bathroom floor!) but still...

I hope older daughter had a good first day even if your day sounded hectic. The sock and shawl look wonderful I think.