That's more or less what I feel like I've been hit by. Turns out, though, that it's just the beginning of the semester. You'd think I'd remember what this is like -- I've been doing it a while, after all. This one has had its share of chaos, though, what with the implementation of a new campus-wide software system (by a mandate from above). In spite of the fact that this implementation was years in the making, and that you'd think the software management folks would be aware that people might actually want to look at, you know, their schedules and class rosters on the first day of class (shocking, I know), they were completely unprepared for the load on their servers, which caused untold problems the first couple of days of the semester. We're still dealing with load times of 5-10 or even more seconds per page, which doesn't seem like a lot until you're trying to see whether new students have added your classes, or to find the permission numbers we now have to give to students to add our classes instead of just signing add slips (this is supposed to be Easier for Everybody; it has become clear to me over the years that Everybody does not include faculty). However, this too shall pass.

And in spite of all of this, I do have students, and I even now have rosters (hooray for technology). I like my students, I like my subjects, and I am determined that this is going to be a good semester. Hear me now.

However, I'm still dealing with a lingering longing for the simpler days of summer, so I thought I'd share a few pictures of this past weekend's camping trip, by way of staying in that moment a bit longer (which I realize is not the same thing as staying in the moment, but I'm going to contend that it's a step in the right direction).

Did I mention that we packed our new very favorite camping meal ever? Tamales from our local farmer's market. It turns out that cooking them over an open fire makes them even yummier than when they're steamed. Who knew? 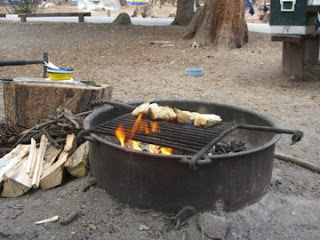 Add some cut-up red bell peppers and a hard cider, and you've got a meal fit for royalty. Especially when it's finished off with s'mores made with dark chocolate. Mmm...

Rick got to do some reading. 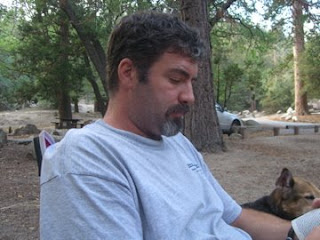 So did Older Daughter. 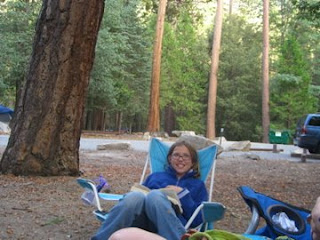 And when it got too dark to work on the mitts I'm knitting, I worked on my half-pi shawl. 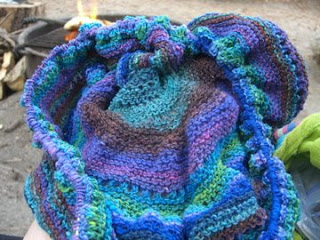 The next morning, we went for a short hike. 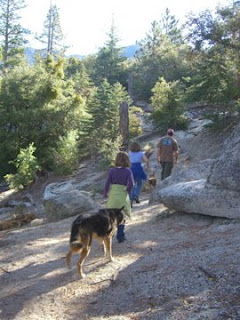 We are definitely planning to go back. 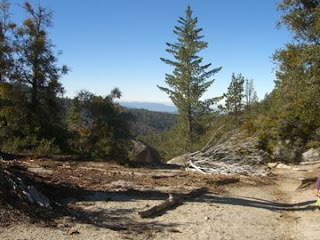 In the meantime, I have now made it through half of this week, including an academic senate meeting today that was, as the first of the year always is, interesting, and during which I got to the thumb gusset on the second mitt. Only two more days to go on week 2. Is it time for a nap yet?
Posted by Knitting Linguist at 4:57 PM

We just switched to Office 2007 and Windows XP and it was terribly frustrating. I spent several days trying to get help with fonts that wouldn't read properly and finally googled until I figured out the answer myself. Go IT.

Dear Lord -- was your software implementation done by my school district? It sounds like something that would happen at my school . . . And the "everybody" not including faculty is SO TRUE. I had to walk a student to guidance today and personally sit down with his counselor because he was supposed to be in my AP Bio class and after 7 visits by himself, they had still not made the change to his schedule.

Still . . . this too shall pass. You have students and classes, and you will have a great year :-)

Hurray, I'm finally home--and hurray for you, you have rosters and students! I love the idea of 2 knitting projects accompanying you on the camping trip; very EZ.

That's what summertime is for! To wipe out your memory of the first day. It will all be humdrum routine soon enough.

I'm not sure which is prettier - the scenery or the half pi.

Why would you want to nap when you've got that beautiful half-pi shawl to work on?

You haven't followed up your promise to say more about Sarah Palin. I couldn't go to bed last night cos I kept refreshing the news pages just one more time. I do love an open mike story.

Love the colors of your half-Pi!

My husband would absolutely love a fire ring/grill like the one in the camping picture. Hmmm.

...sigh... I remember 'camping'... the photos are fabulous, both scenery and the WIP.
Here's to a great new school semester!

PS... oh yeah, and have you been contemplating Palin?

I do not envy you. You're right. They make everything easier for everyone, faculty excluded.
I remember.
I don't miss it!
Love the looks of the camping trip, and especially 1/2pi.
(((hugs)))

I don't think Everybody includes the students, either. Back at work with a vengeance!

The long haul semi is going to hit me on Sept 15th. ai an't say I'm looking forward to it. I think I'll take a Willow equivalent of a camping trip...

Sounds like a good camping trip. I'm ignoring the crap that is computer technology related. We are updating too. Bah all the way around.

Am I the only one who looked at that picture of Rick reading and did a doubletake at the scene behind him? It looked like you had a small plane parked back there. I know, I know, it's a car and a low wooden barrier but it looks like you flew in. (Don't we all wish we could.)

Oh - that looks so good, no wonder you are staying with the moment for as long as you can, hope the IT issues have stabilized, noticed I don't say sorted, they are never sorted. Happy teaching, keep knitting in meetings as long as you can. Whats next?
Stella

i think i was hit by the mac truck of chaos around may sometime and i haven't recovered yet ;) hopefully things will start slowing down soon and i can spend a whole month at home again. it's kind of fun, but crazy too. good luck adjusting to the new software stuff.

oh, and speaking of mac trucks (i thought you might be interested as a linguist) i used the phrase mac truck to someone up here in alaska (because that's what we called all big trucks where i grew up in massachusetts) and they had no idea what i was talking about. after i explained, they laughed at me. apparently they call them tractor trailers all the time, never mac trucks. wierd huh? i love the little quirks of regional vocabularies - most of the time anyway :)

ok, and now for a totally banal comment, ignoring all the other details of the post .. rick is so cute! (i think that's the first photo i've seen)

Oh I feel it too, we start classes on sept 22nd and there is an ever lengthening list of things to do and a never ending flow of emails to answer.

I realized today when I asked a student what X course was - and he looked at me like I was completely insane b/c it's one that EVERYBODY takes - I am slowly but surely losing my marbles. Right. Fall start. 800+ freshman. 200 of them all mine. I remember now...like my mother (and some of the other commenters) like to say 'this too shall pass'.

If only it would pass without more stress, that would be wonderful...improbable, unrealistic, and absurd, but wonderful.