(I see I've used this post title before. Maybe this is a hint to me to develop some better calendaring skills?)

Thank you all so much for the good wishes for my brother and his partner. We had a lovely weekend in Sacramento -- it was even relatively cool, which was a pleasure. The wedding went beautifully, and both girls played their parts well. Older Daughter had a reading to do, and carried it off with aplomb, and Younger Daughter kept track of the rings and produced them at the appropriate moment. They loved being part of the ceremony, which was very small and intimate (just close family), and I was so glad that we could all be there.

You may be noticing the total lack of photographic evidence that we were, in fact, in attendance at this wedding. That's because I forgot the camera. So did Rick, to be fair. I have this theory that, on every trip, something will be forgotten, and this time it was the camera. The nice thing about this theory is that I assume that something will be forgotten (note the singular there), not somethings, so once I figure out what I've left behind (it can't be on purpose, though, not even accidentally-on-purpose) I can relax. And in this case, it wasn't even that bad, as there were more than enough cameras to go around, and I've been promised copies of the pictures. I'll share later.

The time in the airport and on the plane and relaxing in my parents' backyard (yes, there was relaxing!) meant that I got some knitting done. On Thursday evening, I cast on for a pair of socks that I've been contemplating for a while, and made some significant progress during Friday's knitting group plus the two-and-a-half hour meeting that came after it. These are the socks that I'm knitting for my friend who is participating in the three-day Walk For the Cure in November (yes, I have promised a good long post about that, and it's coming; I'm trying to time it right). This is the pair that caused me to buy Lime and Violet's Intentions Yarn, and people, I am loving this yarn. Adoring it. Really, really having fun knitting with it. I'd roll around in it, if there were enough of it for that. But there isn't, so you're all saved from a picture of that particular horror.

Meanwhile, how about a picture of the socks? (Note: I still don't have the camera with me, so you get PhotoBooth shots. Sorry.) 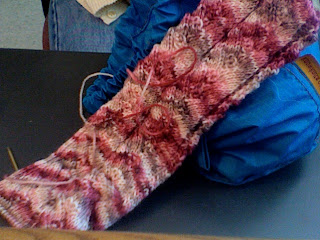 As you can see, I'm almost done with the first one, just the toe to go, and then some kitchenering (which I'm looking forward to), and then I can cast on for the second. I've gotten some good knitting time in since coming home, as all of the California Indian Day events that are taking place on campus this week (and which I'm on the planning committee for) offer a perfect opportunity to knit. This includes the 2-hour guest lecture I'll be attending tonight in a colleague's class. I'm guessing I'll have cast on for the second sock by the end of that.

I'm knitting them the way I knit my Yarn Nerd socks this summer. I hesitate to call it a pattern, since it's really just a stitch motif from Barbara Walker (doesn't it look like dragon scales?), but I really loved the way the heel turned out on my pair of socks, and it seemed appropriate in this case to knit something that came out of my own brain (plus Barbara Walker's). I hope they fit my friend. 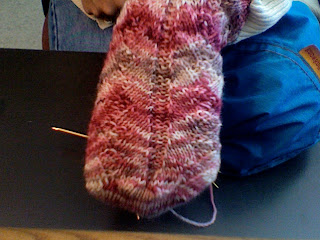 I also managed to ply almost all of the Jacob on Sunday night after I got the girls to bed. All that's left is what was on one of the bobbins after I finished with the other (I apparently misjudged my roving split a bit). I have around 200 yards, or a wee bit more, plus whatever I'll get off that second bobbin once I get around to winding it into a center-pull ball for plying. I am tremendously happy with the way this turned out. It's a little looser than I might have liked, but there's no twist in the hank, so it doesn't look like I either over- or underplied it, and it's so very soft. It also bloomed beautifully when I soaked it. 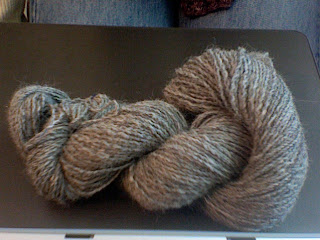 I haven't had a chance to work out the wpi yet, but you can see that it's relatively fine, even plied, and I think it's pretty even (there are a few bobbles, but mostly it's fairly consistent). 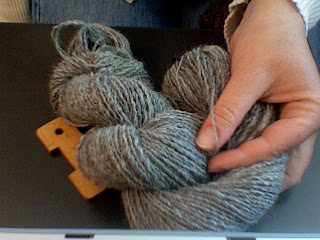 I'm not sure yet what I'll use it for, and whether I'll knit a scarf with it (or mitts?), or whether I'll save it to put some colorwork into a bigger piece. Since I don't usually knit in more than one color, that feels like a big commitment to make, but we'll see.

Meanwhile, I have to finish a big ol' pile of grading, after which I'll be caught up until about 10:00 tomorrow morning, when I'll get the next pile in. Then I have to write a midterm (yes, it's almost that time already), do more reading for my classes next week, and check my List O' Things To Do Yesterday. What's on your version of that list? Mine includes sleep...
Posted by Knitting Linguist at 12:45 PM

OOppss! Forgot the Mazal Tov for your brother in my comment on the proper post,,, sorry about that but a mazal tov is good any time, right?

I think it is a conspiracy that thing they do to us with time lately, or is it related to global warming?!? :)

dude, i have so many lists of things to do yesterday, i'd have to make another list just to get properly organized! hopefully i can take the rest of the week off and get really truly caught up. heh. it doesn't hurt to hope, does it?

Revel in that feeling of being caught up. I'm caught up now but a, getting another set of papers tomorrow at 9 a.m. (and you'll still be asleep, I bet). Plus I haven't written the conference paper I'm scheduled to give next Thursday. So maybe I'm not caught up after all.

So glad you hear that your brother's festivities went so well that there was relaxing time!

Is it possible to catch up? Sympathies for the grading pile - not so fun to come home too, especially after such a lovely little trip.

I secretly enjoy meetings and trainings. Because I knit! Ha!

I actually wrote out a list for last weekend. Absurd. But better than running it through my mind incessantly. Weekends shouldn't have lists. Pout!

Lovely socks! And spinning! Glad the weekend was good, I thought about you all...
I've just nominated you for a blog award...see my post for details?
(((hugs)))

I'm glad the wedding went well, especially the reading and ring bearing! Sometimes things are so much better without a camera to get in the way. I love having pictures, but I think you're less in the moment when you're on the lookout for a "perfect shot."

The spinning and socks look lovely. If I could only get my yarn that fine...

I had a moment of clarity a few years back when I realized I was successful even if I complete just part of my list. You are, too.

Lovely yarn - it looks so misty and soft.

oh the jacob is beautiful - no wonder you wanted more. i'm sure some one had a camera ... or maybe its a family thing, the forgetting. and I'm not even going to mention the socks - I'm jealous, that lace is perfect for knitting socks with, I love how it flows around the foot.
S

The spun yarn is really very nice. I vote for a scarf simply because I'd like to see it spread out around my neck and not just on the ends of my hands.

I love that dragon skin pattern, i've made several sweaters over the years with it. I've been putting in 12 hour days to meet a deadline (FRiday) so I can't wait to feel caught up even for an evening.

Your sock is gorgeous as is your handspun! Very Fine :^)

Hah, the yesterday's list, I'm rarely caught up, I should probably shorten that list.
Looking forward to seeing the wedding weekend photos!

I'm glad the wedding was fun, and your socks and spinning are lovely. I think you should publish your Dragon Scales sock pattern so I can make them too.

I have a terrible case of startitis this week that I am blaming on my computer still being broken (although hopefully tonight . . . ). I started two new projects last night, but I have needles left, so if you publish the pattern, I can start them too :-)

As for the grading, I am going to grade again when the school fixes the computer so I can enter progress report grades. This is a childish attitude, and I don't really care. Having computers on the fritz at home and school is too much for me right now.

Congrats to your bother. I'm somehow missed that last post. The socks and the yarn look wonderful.

Ooooh, look at that handspun, so fine, so soft looking... Very nice.

Pretty sock! And that's an awesome Walk. I'm not up to doing it, but I am trying to support everyone I know who is, so please do put up a link to her page, 'kay?
And lists of Things to Do? Well, mine has been seriously curtailed, but at least I've got a good reason!