Isn't admitting the problem the first step to recovery?

It's not that I've been too bad, it's that yarn just seems to keep arriving on my doorstep, and I'm not knitting it as fast as I'm thinking of things I want to knit and getting the yarn to knit them.

First, though, the scarf is done and blocked and ready to go to my friend when I see her. 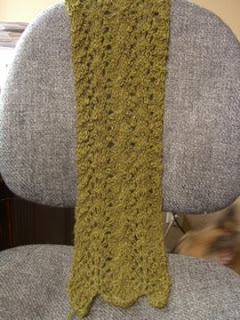 That's fairly accurate for color, although you can't see the stitch pattern so well. 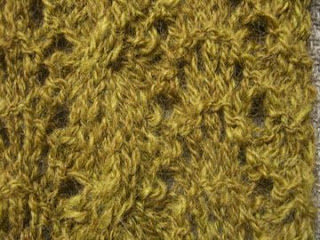 Isn't it just nubbly and tweedy in the nicest way? 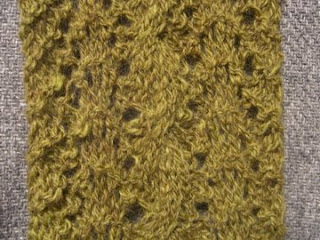 This is Barbara Walker's cabled feather and fan, which I found to be great fun and a nice match for this yarn. The one thing I didn't do that I would have if I'd had more yarn, was to knit to halves and graft them in the middle, because while the cables aren't clearly unidirectional, the feather and fan bits are. But I wanted to eek every last ounce out of this skein, so I didn't (as it is, it's on the short end for a scarf). I also didn't block this as vigorously as I might have, but I rather like it this way.

I have also acquired some yarn (as you may have guessed from the opening of this post). First, from Knitting Notions. 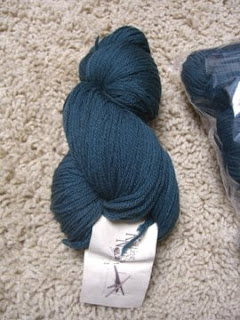 How gorgeous is that? There's a bit more greeny-gray mixed with the blue in real life, but that's pretty close. It's the Classic Merino Sport, in the Ironstone colorway. I'd originally gotten the yarn for knitting myself this cabled pullover that I've had in mind for a while, but my imagination was recently captured (again; I keep thinking about knitting it and then getting distracted by some other shiny object) by Kate Gilbert's Sunrise Circle Jacket, and now I'm wondering whether I can play the game where I knit a larger size to make up for a smaller gauge (it looks like I might be able to, if my math is right, but we'll see). One reason to put off knitting the cabled sweater I keep visualizing is that I'm considering going to a workshop in January that would involve taking a class on garment design, so maybe it'd be better to wait until after that to try to work on my vague idea for a sweater (or maybe that's just my excuse for not working out the math on that one...).

The other yarn I recently got myself is from Fearless Fibers. 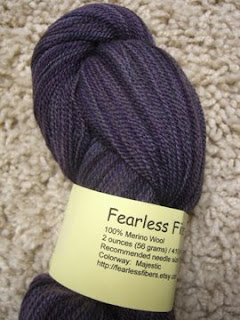 This is her Merino laceweight, in the Majestic colorway. I've been wanting some purple lace for me, and when I saw this on Anne's blog, I promptly went off and bought myself about 1200 yards' worth. Oops. I don't have a plan for it yet, but I'm guessing that I am not going to have any trouble finding something lace to knit. 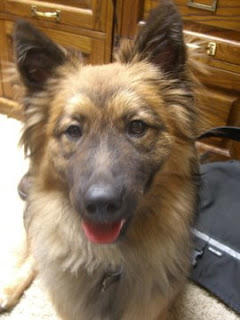 Other than that, I've been plugging away on the socks I'm knitting for my friend Anna (the one from the contest post); I'm about to start the heel on the second one, and I have high hopes of finishing soon. I love this yarn, and will definitely be keeping an eye out to get some for myself at some point. Meanwhile, Rick's brother is on his way here for the weekend, and we have some friends coming to dinner, so I have a pot of chili to make.

Also, while I'm still waiting for all the pictures from my brother's wedding the other weekend (he's being slow), he did send me a few, including a rare shot of me and my mother (we're usually running around behind the scenes, and the chances of catching both of us standing still at the same time is slim; I'm also really not fond of pictures of myself, so I tend to avoid the camera). 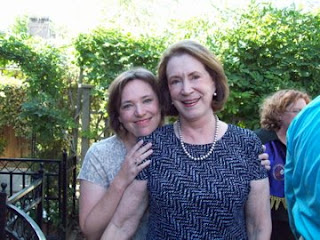 Isn't she great? He also sent me a shot of the girls. 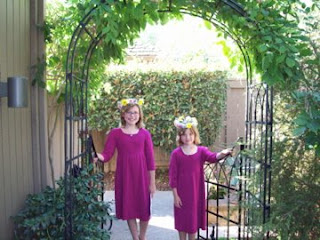 Have a good weekend, everyone (and keep your fingers crossed for us -- it looks like rain, and we could really use it).
Posted by Knitting Linguist at 1:47 PM

You and your family look lovely!
You are so lucky to have that purple fearless fibers yarn, I was drooling over it but managed to keep being good :)
And Like is not strong enough, either it is not a problem or you love, lust or are addicted to yarn, no?
Have a great weekend

Hello Jocelyn! Found this charming and interesting blog whiles I was browsing knitting blogs instead of actually knitting... and then as I read I worked out who it is... Hello, this is Margaret here, Nancy's sister! Fancy meeting you here! email is last name then full first name, all one word all lower case, @yahoo.com. All the best! Have bookmarked you. :)

The scarf is yummy, the yarn, tasty, but the girls are the sweetest picture of them all.

That Sunrise Circular is calling my name, too, but I may have to watch you knit it while I keep on at the Bohus.

I like yarn too - you've got lots of company! Very pretty yarn, and what lovely family photos, including Tilly!

i'm sure something will pop up very soon for that laceweight . . .
nice scarf!

I just installed a row of hooks in my studio and hung all (well, most of!) my yarn up in bags.

It's pretty overwhelming to have it hanging over my head there!

"...yarn just seems to keep arriving on my doorstep" - that's it exactly. I have that very same symptom. I've no idea what's causing it.

Workshop on design and fit? Where? At your LYS?

The scarf is truly lovely. The pattern fits the yarn perfectly.

PS: Treasure that photo of you and your mom!

It took me a moment, looking at the scarf, and then I was going, that looks like--and I read down some more--it IS! Cool! Such a very different effect from what I used it for.

The smiles in the other photos look like a perfect day enjoyed by all.

We got a wee bit of rain.

That's such a cute picture of you and your mother!

I'd call you on being cowardly about the sweater but you are taking a class and it's not as if you don't have any yarn to play with in the meantime....got to use up that stash to stash more, y'know.

Love the fabric of the scarf! I'm a sucker for anything that screams "cushy" and that certainly does!

What a great pic of you and your mother!

You've been so busy with fiber and life. Your spinning is looking good, and wow you've knit a scarf with your own pattern and yarn.

If only we had all the time, and yarn, to make all the items we dream of knitting.

Heh, I'm just a yarn and fibre ho and not ashamed of it and really, I don't often run across the 'shame faced' ones.
The scarf is LOVELY as is the yarn, nummy.
Love the photo of you and your mum, and the girls, sweeeeet.

er... both yarns are nummy. and Tillie, I just wanted to reach through and give her some lovin'. What a sweet face.

Silly. Not just Mom looks great! So do you! What a lovely photo - frame that one!

And I have Majestic, too, now..can I remember which of Anne's scarves I bought to make with it?

Great pictures! Of your family, too. (oh, I'm funny)

I'm in the same group. YarnAnon.

That fearless yarn is beautiful. I am sure you will indeed find a delightful pattern for it

Your family is gorgeous :-) My mom refuses to be in pictures at all.

As for the yarn addiction -- I have yet to determine an appropriate treatment. Especially with yarn that pretty ;-) My current advice is to just be sure you stay under budget . . .

mmmm..yarn. I like the scarf. I think you are right to wait for the workshop before making your vague sweater idea a reality.

I love those colors. Can't wait to see what you knit from them!

What a sweet shot of you and your mom. That is beautiful and your girls...so pretty!