That's what I have to say to everyone who has today off. I don't. Hmph.

Of course, in the interest of fairness (and I am nothing if not fair)(I heard that), I should point out that Mondays are the day I work at home, and given how behind I am at work, I'd probably not be doing anything different even if I did have today off (except I wouldn't have Older Daughter here, asking me a question every ten minutes or so). And while I'm under the influence of this fit of honesty, I should also mention that it's not like celebrating Columbus day is unproblematic for someone who works with Native Americans. So even if I did have the day off, it's unlikely that I'd be dressing up like the Pinta and sashaying around the city, hollering about how glad I am that someone finally found The New World.

So, all right. I take the phthbbt back. Those of you with the day off, enjoy it -- just drink a margarita for me, 'k? (I am on my third cup of coffee; alert the media.)

I am managing to keep busy. Among other things, we finally replaced our washing machine, and the lovely Sears guys delivered the new one today and hauled our old one away. It was time; that old machine was in our house up north when we first rented it, and then it stayed with the house when we bought it. It lived through two babies, plus all the stuff that comes with wet active dogs, and then moved down here with us six years ago. I have no idea how old it is, but it was starting to make really scary noises, and given that we've had it repaired several times, it seemed like a good idea to invest in a new one before we found ourselves in a washerless state of emergency.

So we got one of those front-loading, energy-saving jobbies. It's got buttons and lights and whirligigs, and can I just tell you something? I'm scared of it. Seriously. I'm going to avoid the laundry room until Rick comes home and convinces it to stop beeping and blinking at me. I keep waiting for it to say, "What are you doing, Jocelyn?" in a frighteningly calm tone. Thank goodness there are no airlocks in the house.

Meanwhile, I'm banging away at the computer in the kitchen, wishing I could knit instead. I am so close on these socks. I am also relatively low on yarn with this first ball, and am engaged in the whole Race To The End thing that I do. You know -- where you knit really fast in an effort to get to the end of the sock before your yarn gets to the end of the ball. I can't possibly be the only one who does this. Can I? (Lie to me.)

Check these out though. I'm in love with this yarn. I adore it. Truly, madly, deeply. It's soft, and the colors blend together in the best possible way. My only question at this point is whether to buy myself to skeins of this colorway to knit myself some socks, or whether to buy the roving in this colorway to spin into sock yarn to use for socks (note the optimistic assumption that I could spin anything resembling sock yarn). 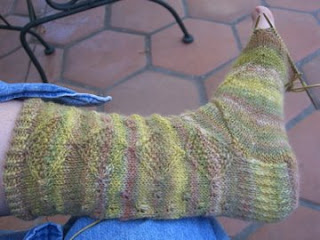 Do you see how it stripes without being all, well, stripey? Sort of shadowed stripes. Love it. 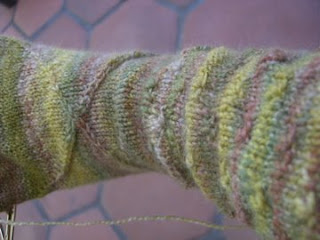 That's the top of the foot. Do you see what I mean? Why I need some more of this yarn? (I know, I know, I have two skeins of the lovely Jacob's coat colorway; what can I say? I'm a bit of a yarn pig.) I'm guessing I'll have the first sock done later tomorrow, since I have a meeting and a soccer practice to get through, and then I'll get the second one started. Between Friday's nearly-three-hour meeting, and two soccer games on Saturday, I should make good progress.

And speaking of soccer games, the girls finally had a successful weekend this past weekend. Both girls' teams won their games (it's been a rough season, so this is pretty exciting). We got home at a reasonable hour, and I sat down to spin (I had to celebrate somehow, right?). I've spun a quarter ounce of the four-ounce bump of Sanguine Gryphon merino/silk roving I posted a picture of late last week. I divided the bump into halves, and then split those lengthwise into four strips, which I am spinning, four onto a bobbin; I'll then spin a two-ply yarn. It's feeling more even than usual and fairly fine. I have hopes of a fingering weight yarn, or close to it. 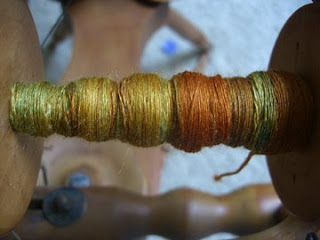 Those are the singles. Here's a bit of the singles plied back on itself. 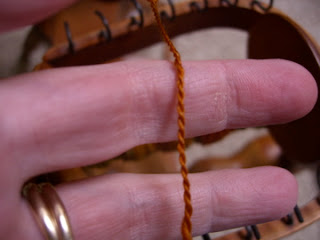 Not too bad. I'll keep referring to that to be sure I'm getting my twist even throughout the spinning. This roving drafts so smoothly and evenly that it's a real treat to spin.

As I was spinning, the girls jumped up and down and demanded to finally (they've been pleading for a while and we've never had a chance) be taught to spin on my spindles. So when I'd finished my bit, I got them started. They loved it. 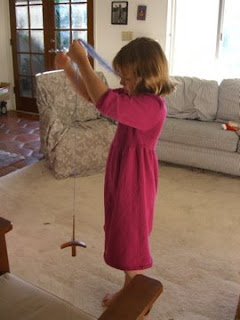 In fact, they got up on Sunday morning, and tried it again. 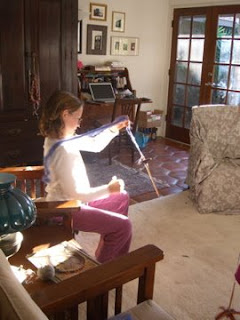 I think this is going to be one of those things that, like teaching them to like sushi, seemed like a really good idea until they start eyeing my stash. Then I'm going to regret it.
Posted by Knitting Linguist at 2:36 PM

AND letting them wear your clothes. I'm with you. (plus, I did not have a margarita today)

We had our holiday weekend last weekend but it comes in the middle of spring break so what good is that?

I love the sock yarn and I know you aren't the only one who knits faster to beat the end of the yarn. I could name a few bloggers...

I think lots of us "knit faster"!
Congrats on the new washer and the new spinners - maybe they can accumulate their own stashes ;)

Those socks look so soft and warm! You definitely need more of that yarn.

The spinning is absolutely beautiful, too. I love the colors, and I envy the fineness of the spinning. Someday I will get there, but for now I am still firmly in the uneven and chunky stages. =)

Hope you enjoyed your working from home day, if not a day off (sometimes I find that the two are eerily interchangeable...).

You're NOT the only 'one', I do not lie.
Congrats at the new washer. I hope it shuts up for you :^)
I read several articles about the Native American's view on Columbus Day yesterday. They didn't surprise me and I understood completely.
LOVE those socks! I hear you about the stripes, I also love the shadow stripes you're getting.
Hee... spindling daughters. I'd be putting a lock on my stash closet door and encouraging them to create their own stash.
Hi, my name is Marianne and I'm a wool/fibre/yarn pig. :^)

I think your spinning is purty darn good! Are you ready for some merino/angora blends to spin??? Let me know and I will gift you with some.

I didn't get the day off, but I was hoping to finish my work early. Hah. They were replacing the furnace, so instead of getting in early, I had to wait until late and get to bed later. yawwwwwn

"Dressing up like the Pinta"! Ha! That gave me a laugh.

I love the sock yarn, and I, too, have a new high tech washer with a bunch of little lights that glow in the dark when it is running. Too bad they don't make steam punk washers, that's all I can say.

LOVE the socks and i'm so jealous of your talented daughters; i never got the hang of spindle spinning myself . . .

and excuse me, but that new spinning you are doing looks like sock weight to me!

They'll have to have their OWN stash...
lolol
You asked for it.
:)
Socks are so cool..and remember one person who had Monday off? Little ol' Me? I worked all day, too! Just off from the full-time job...so I could work on the part-time businesses...
(((hugs)))

my hubby was home yesterday! we toasted you with a glass of mojito!

Thank you again for knitting for me.
You think the colors are pretty on this yarn, just wait until you start in on the Joseph's Coat it's my favorite.
Wish I could have had a ritta for you, but alas I had to work at the bakery today....could have made for some interesting cheesecakes...

We got one of those washers, and my husband told me how important is was to leave the door open when not in use so it dried out and didn't get moldy. I scoffed, but did it anyway. Now I've read about the mold problem in several places, so leave the door open, Dave. And I had to work today, too.

I didn't get the day off either. Bummer. They'll have to have their own stash. You should have them knit it before they get more to slow them down. I love the socks. Very very pretty.

I do the "Race the Yarn to the End so I Won't Run Out". Doesn't everyone? Sometimes it even works.

I had to work too. Holidays? What are those? If it wasn't for Thanksgiving and Christmas, I wouldn't get any.

But maybe they'll help enhance YOUR stash. As in, Mummy, do you want this roving? I don't want it anymore! The colors are SO last year." Really, though, spinning is great bonding time for the girls.

I usually eye the yarn and guesstimate the amound I'll need and even if I think I'm going to run out, I doggedly continue to knit away at it. I kinda pull on the yarn, thinking I can stretch out a few more yards.

I worked yesterday. Drank coffee AND tea. Finished reading a Newberry Award winner titled "The Slave Dancer" which broke my heart and reminded me AGAIN how much I hate slavery and any kind of cruelty.

Ohhhhh, Gryphon's fiber is so pretty, and your spinning looks perfect for socks. The silk with merino would make durable socks, I should think.

We got a bells and whistle front loaders last year. Yes, leave the door ajar between loads. At first Ed kept wanting to shut it but I think he's finally trained. The one bummer is that I haven't figured out how to use the washer for felting.

Wonderful that the girls are taking to spindling.

You can tell them I have been spinning for fourteen years and I have never yet mastered a drop spindle. They are ahead of me.

As for knitting faster, on the very rare occasions when I've had a yarn problem like that, I've tended to knit slower and have a hard time making myself face knitting it, for fear of disappointment at being unable to finish. So I don't finish, till I make myself realize how stupid that is. Haven't ever actually run out yet.

yeah, i didn't have columbus day off either. and besides the natives, if the holiday was for the first european discoverers, what about leif eriksson?

I think you have a really good thing going, but you might want to check the child labor laws. We know your interest in increasing your stash. ;-)

Oh, and (calmly stated), what are you doing, Jocelyn?

Our new dishwasher (which we also have yet to run) says hi to your new washing machine.