On December first (two weeks ago that is now, but who's counting), I laid out an ambitious holiday knitting plan (OK, I realize that it is in no way ambitious compared to the pros, but it felt big to me). I would first like to state for the record that prior to December the first, I had planned no plans with regard to the knitting of gifts. In fact, I think that it would be safe to say that my general attitude toward holiday knitting was something along the lines of, "I have plenty of projects on the needles, and I really want to knit myself a sweater, so if people want handknit gifts they can whistle for them". Actually, my thoughts were a bit more charitable than that, and what I really figured was that knitting for birthdays is a more sane plan of action, as they tend not to all happen on one day at the end of the year right after grades are due.

(This is only partly true, as there are an appalling number of June birthdays in our family, but I'm going to stand by that statement for now.)

Then the yarn sale happened. What I guess I'm trying to say here is that this is not my fault. Anyone, upon walking into their very favorite LYS in the world and seeing every single skein of yarn on sale, would have succumbed to the desire to purchase yarn. And anyone who feels guilty when buying large amounts of yarn this close to Christmas might find that it alleviates that guilt to insist to oneself that the purchasing is being done for the benefit of others.

(This doesn't exactly explain away the purchase of this yarn right here; but I'm not talking about that right now.) 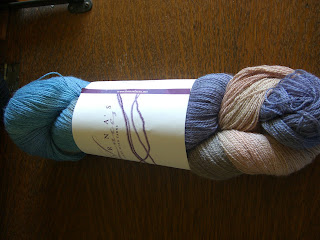 (And anyway, can you say hello kestrel colorway? I had to buy it.)

Of course, many of you, being smarter than I, might have also realized that the haze of goodwill generated by yarn fumes should not blind one to the fact that the aforementioned yarn is, after purchase, still in need of knitting before it can be given to most people (this is not true if the recipient is a knitter, but I didn't have any of those on my list, alas). I, however, still under the influence of those fumes, trundled home and laid out the following ambitious plan:
A Swirl Shawl scarf for my sister-in-law
Mittens for my brother-in-law
Mitts for my niece
Icarus for my aunt

I may also have mentioned something about finishing Rick's sweater, and maybe some socks. See what I mean about those yarn fumes? More dangerous than a good single-malt, they are.

However, I am here to announce that two weeks later, I have achieved the following:
A swirl scarf for my sister-in-law
Mittens for my brother-in-law
A hat, which I'd intended to go with the BIL's mittens, but which looks so good on Rick that I think he's going to get it instead (don't tell, though, it's a secret)
Mitts for my niece.

This leaves me with Icarus for my aunt (her request), which I will be casting on tonight, just as soon as I'm done posting, and Rick's sweater. I think that I have reached a state of acceptance with regard to the sweater; it's not going to be done. As for the shawl, I'm engaging in some backup planning that involves wrapping up the unfinished knitting in a beautiful bag and giving it to my aunt for two minutes before demanding its return so that I can finish it. That should work, no? (Please tell me that there's someone else out there who's done this? I haven't tried it before, but I have read of it...)

Look! I even have photographic proof that I have, indeed, knitted as I say I have knat. (Can you tell I'm a bit giddy?)

First, the scarf. This is the Swirl Shawl pattern, which I modified to make narrower so as to knit a scarf instead of a shawl. I used Jojoland Melody yarn, which I found unexpectedly delightful; I'd definitely knit with it again. I ended up knitting a grand total of 31 swirls, which means 62 ends to weave in. I think I'm discovering the zen of end-weaving. I also did them a few swirls at a time, so that my zen wouldn't wear off (I know it's not supposed to, but I guess mine's not so solid yet). 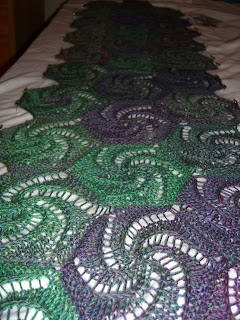 (I should mention that these are all nighttime indoor photos; I have to send most of these off tomorrow, and with the rain we've been getting, there's not much in the way of good daylight in the daytime anyway.)

Then there were the mittens. We all know how traumatic that experience has been for me. I'd like to mention here that I asked Rick to try them on one more time tonight before weaving the ends in, and dang if they didn't fail to fit him again, but in a new and innovative way this time. I told him to go away and take his frightening mutant hands with him. How could I have known him for twenty years and never realized that he had mutant hands? Hear me now: I'm never knitting mittens for this man. 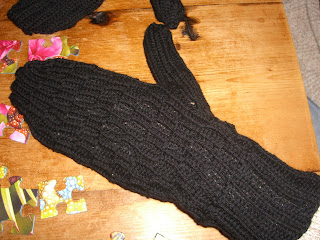 These are Anne's Lacunae mitts, made into mittens, and knitted from Cascade 220 yarn. I'm not so fond of the yarn, but the pattern is wonderful. The best bit about these mitts is that those warm little honeycombs almost completely disappear when they're not stretched out over a hand, and they just look like k2p2 ribbed mitts; but put them on and presto! You've got honeycombs! Love it.

The hat is also from the Lacunae pattern. I was requested not to do a full-face shot, as he's feeling rather scruffy today. 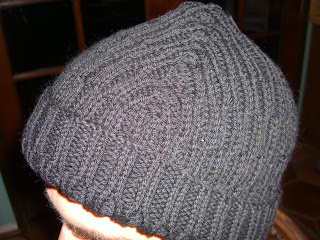 And then there are the mitts for my niece, being modelled here by Younger Daughter, who wants a pair. These are Tendrils mitts from MaryLou of Yarnerinas; I love this stitch motif, and had such fun knitting them that I'm thinking I might need to knit a pair for myself; I wish I could get a picture in better light so you can see how cute they really are. I used Lorna's Laces sportweight for them. I might actually be able to get another child-sized pair out of the skein. (Lorna's Laces, I should mention, has become one of my new surprise favorites; how did I miss how much fun it is to knit with?) 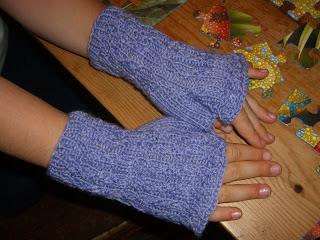 So there you have it, everything that got done in the last two weeks. I now have a week to get this last project done if at all possible. That and the rest of the holiday shopping, three plays, a party, cookie baking and granola making, and getting ready for Christmas eve and the big day itself, as well as for houseguests; oh, and I'd like to catch up on my blog reading. Crazy.
Posted by Knitting Linguist at 7:17 PM

I think you're loaded with knitting karma. That's a whole lotta knitting you've done! It makes my little pittance look so very small.

Sounds like progress to me. At least you have discovered the secret mutant aspect of the man you thought you married...the mitts are sweet. Thanks so much. I'll have the hat and mitts together later this week.

That's a great progress if you ask my opinion and I love your swirl scarf!

About gifting an unfinished project, I did it and I must admit it was a big mistake, cause the project is still not finished and I get constant nagging from the recipient to finish it already BUT the problem with it will not happen in your case so you can do it and succeed. It is just that I really don't like that project and can't bring myself to finish it although Sam claims to like it,,,,

One advice though, if your aunt is a knitter, don't forget to take out your needles before wrapping it or she will gather they are hers to keep,,,, LOL,,, wicked me!

hehe, one thing i realized after all our talks about turning mitts into mittens is that mittens should be looser than mitts, i guess, particularly after the gusset goes onto a holder (sorry, i'm learning, too!). when i did the high peaks mittens i shaped them a lot differently. i might not want that fit as mitts, but as mittens, they work well.

oh and ps: that swirl scarf?? to die for! i adore it and i know i'll never make myself one, hahahaha. i applaud your patience.

Mutant hands. I love it. So THAT'S the problem! My mom knit my dad Norwegian gloves when they were dating in 1950. He still treasures them--they never wore out because he could never get them on. (It happened to be her SECOND-EVER knitting project!!! And the first was his argyle socks!!)

The unfinished project gift could be dangerous. Such pressure! Such expectations! When's her birthday?

I'm weaving in ends and grafting Icord. I could get it done this evening, but I bet it will take me all week.

Really love the swirl scarf! Weaving in ends can indeed turn into a zen experience.

wow. that was a lot to accomplish in two weeks. way to go! that swirl pattern is new to me, but it looks so very very cool. i might have to check that out. (very wise decision to never make mittens for rick by the way.)

That swirl scarf is stupendous! ::off to look at the rav page for it::

Do you knit with a bucket of ice water at your side, into which you can plunge your red hot needles occasionally?

That's a lot of progress! Congratulations! End of quarter relief and yarn fumes are a dangerous combination, but it looks like you've managed just fine. I really like the swirl scarf...I'm so tempted to cast on right now!

Wow, that IS a lot of progress! That swirl scarf is fabulous looking.

Mutant hands, it's such a sad affliction. And coupled with that wingspan of his........well, he's a lucky man to have found you.

Eight days until the 25th. Plenty of time. Huff some yarn fumes. ;)

oh. Yes. I've gifted a gift and taken it back to finish it...not knitting, but cross-stitch.

Hmm...they never got the gift as I never finished it (but it was only one of many my 9 year-old daughter got that year, I'm sure she never missed it!)
:)

Go you! The scarf is beautiful!

yes your list of things to do this week is crazy, but I have faith in you! Love all the projects. The swirl scarf is really really cool.

I've wrapped half-knit gifts several times and presented them. It's always worked out well. Keep in mind that non-knitters will expected to see the finished product soon. That's some great knitting you have going on over there!

Yes, I've done it. I gave my mother a sleeveless sweater [we call them 'vests'] for her birthday with all the ends hanging off it and no button band! I finished it before she went home a few days later and she's still wearing it. She is, after all, a knitter!

PS My word verification was 'stent': a word I'd never heard until my father had one inserted a few years ago! Serendipity indeed!