Or not, as the case may be.

I think it was a good thing that I decided to slow down where possible, as I'm still fighting this cold. I thought yesterday, gleefully (and I'm sure that's when the fates decided to do a little gleeful messing-about of their own), that I had this cold kicked, but by the time we'd gotten home last night, my throat was hurting again, and I was feeling down. Younger Daughter's winter play went well, though; she and her classmates were cute in that way that young kids are cute when they're concentrating very hard on getting something right. They sang a few songs and performed a very short play called "The Crayon Box Talks Back", in which the colors in the crayon box get into a bragfest about who's the best color. Storm clouds come in and thunder at them and explain that while they're all different from each other (a list of differences was inserted, including the crayons with the funny names, which made me laugh out loud), they're all necessary, and that together they make a rainbow. Younger Daughter was a storm cloud, which made her very happy. She took her job seriously. 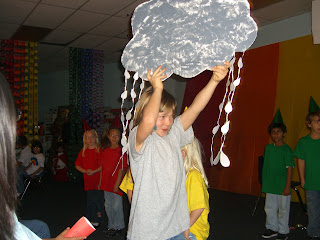 And she was pretty happy when it was over and she'd remembered her line. 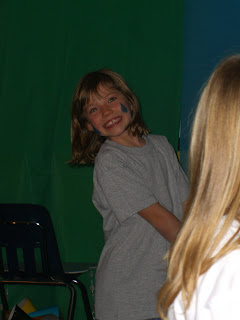 (Having her cheeks painted with raindrops was also a thrill.)

I've spent some time over the last couple of days spinning. I was hoping to match the yarn that I'm going to use to knit the Dofuku kimono (Ravelry link) from Knit Kimono, but I don't think I succeeded.

Well, OK, I know I didn't succeed; the question at this stage is whether I can still use the yarn I spun for trim, or whether the two yarns are so different that there'll be trouble combining them. The yarn I'm going to use for the kimono is Knitting Notions Classic Merino Sport, in the ironstone colorway. That yarn is about 13-14 wraps per inch, right in the sportweight window; it's 390 yards/100 grams. The yarn I spun is 180 yards/100 grams, and came in at 11 wpi, which is a little heavier than a worsted weight. I was trying so hard not to spin the very fine laceweight that I've been aiming at lately that I overshot. Here they are together (mine on the left, Knitting Notions on the right): 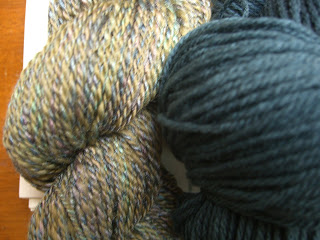 Maybe this shot is better? 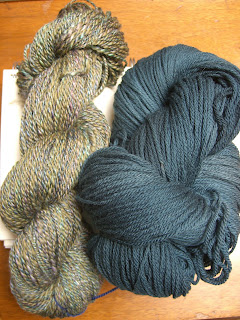 And here's the kimono I was thinking of. 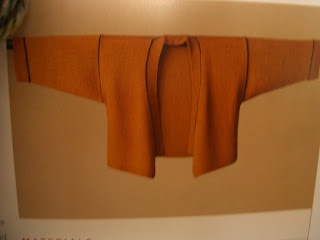 So the lighter handspun yarn would be used where the black trim is. I know that I need to swatch to see how they work together, but has anyone tried this kind of thing before? Is the weight difference going to be a huge issue when I'm using so little of the handspun? Any thoughts?

I'm also working on Rick's sweater, and am halfway down the first sleeve. It's starting to speed up as I decrease stitches. I'm thinking that I'll get the kimono swatched today, though, as we're going to a play tomorrow, and the back is knit as a plain square, which will be perfect in-the-dark knitting; Rick's sweater is far too bulky right now for something like that. And now I'm off to bake 12 mason jars full of granola and to cook a pot of lentil soup.
Posted by Knitting Linguist at 9:59 AM

Depends... Should be fine, I would think. I'm wishing I could come over and eyeball it. If it's really fine, the line of color could kind of collapse on itself, which would be a design feature of itself.

I love the daughter-as-storm-cloud idea!

I'm with alison, hard to tell without seeing it. Swatching should help. If it is too fine and you have enough, you could work it double. Cute storm cloud, BTW. It's been storming here all day, and is still snowing.

I haven't a clue about the yarns but if you're just doing a stripe, the weight can't make that big of a difference, can it?

Your daughter's pageant sounds delightful. I love that look of unbridled concentration they get.

The cutest cloud ever!

I think the combination will work fine but it depends how much of a yekke you are when it comes to such things!

We are just at the end of a big pot of lentil soup and I have a huge pot of Jewish penicillin cooking as we speak as Sam brought with her some nasty cold from the east,,,, also cooking: a Thai chicken curry as per her request :)

Do you need me to send over a portion of my penicillin to help with your poor throat?

oh i'm sorry you're sick! i caught a nasty little cold last weekend but thankfully, it stayed in my head and did not creep down my throat. i treated is aggressively with boiron "cold calm" and it was gone in a couple of days.
that's the second time i've used this product and i have to say, i'm very impressed with it. it feels like it speeds up the run of the cold, so you have a couple of awful days, but then it breaks quickly, too. it does work better if you start using it at the first signs of a cold; it might not help you this time . . .

I hope the cold eases quickly. I must say, child-as-storm-cloud is typically more credible when saod child is a teenager, but your adorable cloud is the exception that proves that rule.

I agree with other comments - for such a tiny bit of trim, I don't think the weight will cause much concern. In fact, given the difference in visual weight, it may be best that the lighter color yarn is a smidge heavier. Yes, a swatch is the smart thing to do - or you could wing it and be prepared to rip. ;-)

your spinning is gorgeous, and beautiful, I still can't spin much thicker than lace weight as easily as I want. I think the only true test is a swatch - just to check. and I like the others idea of doubling up if needed. I wish I knew why my lace weight is even and my thicker stuff less even? I love that Kimono - we had a similar exhibition here this year, based on Kimono dyed with Indigo. I was mesmerized, and in awe of the skill of the artists, both those who make the kimono and those who make the fabric. I also need to say how impressive the swirl shawl is, I hope we get a photo post blocking?

I think the yarn choices for the kimono sweater are good ones! It should be very pretty....

Sorry you're still not feeling the best. Hope the lentil soup helps!
(((hugs)))

I haven't got a clue about the weight difference for that small a bit of the sweater.

I agree that you should swatch it and see. You could adjust needle size to get the same gauge and one yarn would just be a little 'denser' than the other.
Merry Christmas to you and your family, especially the litle storm cloud.

Hope you are feeling better!

You have a very cute thundercloud.

It's so hard to predict what weight a handspun will work up to! (Maybe it's all about that little thing called experience). I don't see any reason that it shouldn't work, and judging from the swatch (yes, I cheated and read backwards), it looks like it will be fine! Love the simple lines on the kimono, too.