Turns out, I do still knit

But first (now that I've tricked you into reading this post by claiming knitting content), the salvaged yarn: I have a lot of time to think about it. My only concession to Black Friday was to go to my LYS for their sale to get yarn for Christmas presents. If all goes as planned, in the next three weeks I need to knit: a pair of colorwork mittens for my niece, a pair of cabled mittens for my brother-in-law, a lace scarf for my sister-in-law, a lace shawl for my aunt, and the sleeves and neck of Rick's sweater. Not necessarily in that order.

First is the scarf for my SIL, since I'll need to get that sent in the mail. I've started. 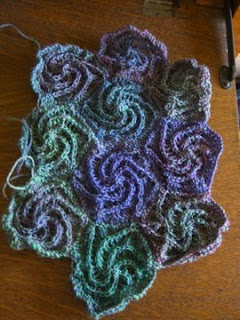 How great is that? It's the Jojoland Swirl Shawl (Ravelry link), except that I'm doing a modified, less-wide version for a scarf (I do have some sense of self-preservation). I'm using the Jojoland Melody yarn, which is very soft and fun to work with. I'm actually quite tempted to knit this exact scarf for myself out of my new handspun, except for the fact that there are so many darned ends (two for each of those little swirls). Aside from my relative dislike of weaving in ends, that does use up a not-insignificant amount of yarn, which I worry about with my limited supply. We'll see...

As soon as I'm done with that, I'll be knitting a pair of mittens with these. 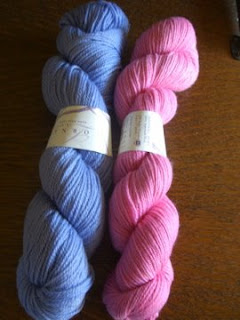 The plan is to knit the Norwegian Snail mittens from The Knitter's Book of Yarn; I'll be using stash yarn for the third accent color. These are for my niece, who lives in cold weather. Can people who are near snow verify for me that superwash wool is still warm enough for mittens? (I have this theory that wool that'll felt a little bit would be warmer, but it's only a theory.)

Meanwhile, I want to knit Icarus for my aunt with this. 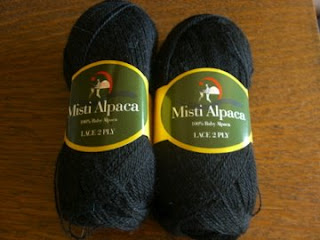 I may cast on for that soon so that I can take it to meetings this week; the beginning part of Icarus doesn't require a huge amount of concentration, while those swirls up there involve both the manipulation of multiple needles, and the picking up of stitches (which I have to pay attention to). We'll see. The thing of it is that this shawl can go up to the last minute, since my aunt will be here for Christmas and I don't have to send it. The scarf and mittens, though, have to make it into the mail.

As do the mittens for my brother-in-law, which I'll be knitting out of this (he asked for black, as did my aunt, what can I say? My relatives are trying to make me go blind). I want to knit Jared Flood's Druid Mittens, even though the only size he wrote the pattern for is women's small. My theory (and my, aren't I just full of theories today?) is that if I knit them in a heavier-weight yarn on bigger needles, I'll end up with bigger mittens. I'll cast on for the cuff and make Rick try it on; if it fits, I'm good to go. If not, then this yarn goes into stash, and we're on to Plan B. (No, I don't have a Plan B yet, but I will.) 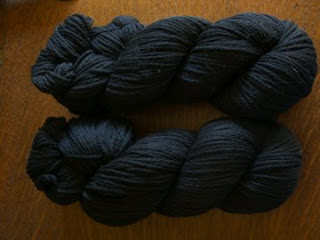 I have an out here, though, since his birthday's in early January. If I realize (as we all know I'm going to) that there's no way on this earth I'm going to get all of that done before Christmas, I can pull the plug and call these a birthday present. I'll plan a backup something just in case.

Rick's sweater body is done, so it's just (ha! have I mentioned the condor-like wingspan?) the sleeves and neck to go. The real pressure, then, is on the first three. This is the first Christmas where I've planned to knit anything of substance for people (hats for kids aren't quite the same), so I make no promises. The funny thing is how hopeful one feels at this time of the month. Last night as I lay in bed, I found myself thinking that there was no way I wasn't going to finish these with time to spare. In fact, I thought to myself in a haze of sleepy delirium, I will have so much time when these are done that I can finish two of the pairs of socks I have OTN and give a pair each to the girls (I was feeling so happy with the world, in fact, that the plan was/is to give Older Daughter my beloved conference socks)(my delusion was not so complete, however, that I didn't make plans to call the dyer first to see if I could order more of the yarn for myself before giving this pair away).

Am I the only one laboring under delusions of a hand-knit Christmas? Am I letting myself in for late nights, sobbing into my yarn, drinking single-malt scotch and eating chocolate? Would I just be doing that anyway? Tune in next time to find out...
Posted by Knitting Linguist at 2:20 PM

I gave up the idea of a hand made Christmas years ago when I was up by myself most of Christmas Eve sewing two dolls for my daughters by lantern light. I'm all for sweet simple gifts but not at the expense of the stress that puts on me.

I tutor a young man in reading weekly. This afternoon he gave me 'that look' of disbelief when I explained that igh also makes the long i sound (as well as i-e, i, ie, y and y-e). Then he asked why. Usually I tell students that it depends on from where we stole the word. And THEN I showed him night and knight, got 'the look' again and I tried AGAIN to explain historical linguistics to him. I think he just decided I'm a little crazy, like the English spelling system.

Hmmm,,,, if the consolation is single malt whiskey and chocolate who am I to try to stop you while you still have control of your sanity (very poor sentence, forgive me please). I will just say good luck brave lady :)

I admire your ambition. I think the scarf is gorgeous. I'm sure it will be loved and hopefully that will make all the ends worth it. Since I don't like anywhere "cold" I'll say that I haven't a clue about superwash/non-superwash. I do know it was 10 degrees colder in my office then the 45 degrees it was outside. My fingers were FROZEN.

Love the yarn. I think it turned out really lovely!

And do you know it's December 1st?

The chocolate sounds good, but I know that knitting and single malt whiskey would NOT be a workable combination for me :) The yarn looks great!

I am seconding Anne's comment, as to the date. You know Thanksgiving was late this year, right? I'll be following your progress with great faith, but enough trepidation to make it interesting. :-)

And yes, superwash is warm, but knit to a slightly tighter gauge as it does stretch when blocked if knit loosely. I knit my husband's We Call Them Pirates cap out of it and it has been good to the upper teens (Fahrenheit) so far, even though he is a delicate flower.

I've been sorely tempted by swirly little hexagons lately. I don't do well with little tiny pieced things, but they are just so pretty.

Good luck with the holiday knitting! I always decide to do gift knitting about 2 weeks before Christmas. So far, I have managed to avoid the inspiration bug, but unwanted ideas for handwarmers have begun cropping up.

I completely sympathize with the condor thing. Too bad 3/4 sleeves aren't really a part of men's fashion...

That swirly pattern is gorgeous. So pleased you managed to rescue your yarn. I will be willing your needles on over the next month. Looks like you'll need all the help you can get

Mittens are always warmer than no mittens, even knitted out of Red Heart!

You are so Funny! (what Rachel wrote I second)
Ahem... I'm hoping you've cast on Icarus... :^)
I'm in the land of knitting felted clogs and I'm pretty sure I'll get them all knit and felted in time. Maybe.

You are not alone. Delusional, perhaps...but not alone. I think I have mine pretty much under control, but then, I'm notorious for finishing things and saying - OH I have TIME...I can NOW make...(and then add so much at the last minute that I sabotage myself!)

My experience with superwash is on my feet - and while I don't live in an ULTRA-cold environment, we can get down into the single-digits with minus-0 windchills. My feet stay warm in my handknit socks.
(((hugs)))

Oh...and btw...why not make Anne's Spiralucious cowl and mitts (the pattern is out!) for yourself with your handspun?
(((hugs)))

Oh dear. Great Plans! Have fun. (I'll spare you my running screaming through the hills.)

You ambitious woman you! I gave up on hand knit gifts for christmas a while ago. I enjoy the holiday so much more when I'm not stressed out and trying to finish things, but even more, there were too many times when my much slaved over knit was given an 'oh how pretty' and tossed to the side never to be worn. I think that there were probably some mistakes on my part in choosing people who were illogical recipients, but not all.

So now I knit for people when I am inspired, or when they ask me to - I am making one pair of socks for xmas for a friend who has expressed her undying love for handknit socks and requested another pair. Now THAT is the way to get a knitter to knit for you. :-)

I admire your goals, I wish you godspeed and no knitting injuries!

I actually came to ask you a question, I was thinking about the pinwheel blanket and wondering what your yardage was (approx) and what size you ended up with. One would look lovely on our new couch...

I'll be right there with you. But no scotch, perhaps a little red wine. Your list might be just a teeny bit ambitious...

The mittens will look fabulous.

No, I'm still harboring my own delusions. Luckily my family has grown accustomed to the idea of Christmas in early March.

That swirly scarf is really cute. Remind me to avoid Ravelry like the plague until after Christmas.