Or maybe the right word is "blizzard".

Either way, it was a very full weekend, which included all kinds of fun activities, and one (just one) actual photograph to show for it. As Rick said, "No one stood still long enough for me to take a picture." Ah, well.

We left on Friday a little after four o'clock to drive up to Mammoth. Rick insisted that it would be a five-hour drive (the Gilligan's Island theme song kept playing in my head as the evening progressed); he has an odd sense, sometimes, of just how long things actually take in the real world, instead of in the world inside his head. It took one heckuvalot longer than that. We hit traffic in Riverside, rain off and on the whole way through the Owens Valley, and then chain control at the bottom of the final grade going into Mammoth. The biggest bummer about the chain control was that there was no snow on the ground most of the way up the grade, which meant we had to drive really, really slowly to avoid destroying the chains on the bare asphalt. Grr... And even when there was snow, it wasn't anything that couldn't have been driven through just fine in a regular car. Double grrr... We arrived around midnight. Oy.

We were up early the next day and on the mountain in time to get the girls geared up and into their ski lessons. It snowed all day, so the skiing was gorgeous. The avalanche detonations were going on all day, and the top of the mountain was closed, but that was OK. The girls had a blast, we had a blast, and we all ate a nice big dinner and went to sleep early. Yesterday was amazing. I'd been demo-ing a pair of skis (long story short: I used to ski a lot, and own my own gear, but the skis I own were purchased before the multi-year skiing hiatus that came with two winter pregnancies - can I just say hooray for snowshoeing? - and young kids; turns out, skis have changed a LOT since then, and we're not skiing enough right now for me to feel justified in buying another pair), and I hadn't really liked them (for those who ski, they were equally flex-y in the front and back, and I felt like the backs kept washing out; I was working hard to make them work on the terrain I like, and by the end of Saturday, my legs were killing me). So I swapped them out on Sunday for a pair with stiffer backs and it made a world of difference (as with good knitting needles, equipment that works with one's style can really make or break an experience). We skied all day, and I felt better at the end of Sunday than I had on Saturday. It was a lot colder on Sunday, though, with the wind blasting down the mountain all day long. Lifts kept going on and off weather hold because the wind was so strong, and we were bundled to the gills; with wind-chill, I'm guessing the temperatures were around 0F, which is particularly cold when you're sitting still on a chair lift for long periods of time. We alternated between freezing on the lifts, and sweating in the bumps. But it was such fun! 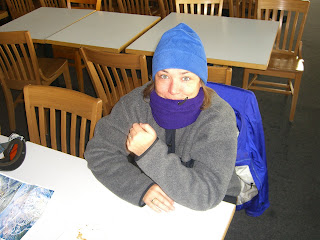 One of the best bits about this whole trip for me and Rick was to see how much fun the girls had skiing. When we've gone before, they've had fun, but have been really ready to be done at the end of a day, and have been leery (to put it mildly) of any actual speed while on skis. Neither of them does "out of control" so well, and while they were both intrigued by the skiing thing (and Younger Daughter was more than willing to go anywhere I'd take her if I'd let her cling to one leg; I have vivid memories of a three-year-old daughter clinging to my left leg and yelling wildly through giggles, "The trees, mommy, let's ski in the trees!!")(she is clearly an incipient adrenaline junkie), they were also nervous.

Not anymore. They had a blast. On Sunday, as it was getting to be time to pick them up from ski school, Rick and I decided to find them over on the learner slopes. We caught up with their class as the girls were bombing down the slope at speed, and watched Younger Daughter catch and edge and eat it. I snagged her lost ski for her and brought it up to her, to find her sitting in the snow, a mad grin on her face. She exhibited no surprise to find her mother standing over her, ski in hand, just said, "Thanks, mama!", clicked back into her binding, and took off after her class. Judging by the look on Rick's face, we were both feeling the same exhilarated sense of pride at watching her sheer pleasure in her new ability. It was great.

I did finish my mittens in time to take with me, but we spent so little time outside when we weren't on the mountain that I really didn't get to wear them. 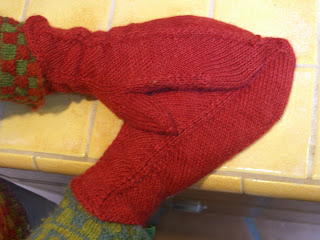 I'm still going to make a little i-cord tie to go around the wrists, a la EZ. 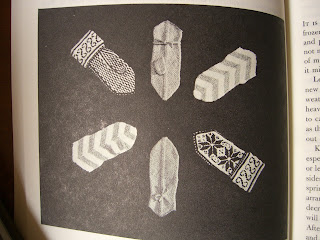 I didn't get too much knitting done on the way up, since I drove most of the way. That, and I succumbed to the temptation to start an "interesting" knitting project, instead of just going with some nice simple stockinette socks, and the interesting project required daylight and non-windy roads to knit. 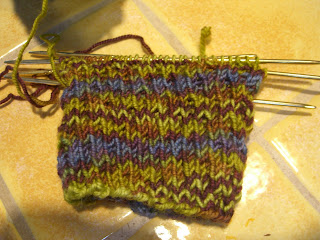 These are socks from last year's STR sock club, which I absolutely adore, and have been dying to cast on. The colorway is gorgeous, and the pattern is simple and beautiful, but it has crossed stitches, which I have to look at to do, which doesn't work so well for me on a drive like the one we just did.

We got home late last night after another long drive, and shovelled the girls into bed. They had both declared themselves well satisfied by the weekend, rushed though it was, and so we were satisfied, too.

I was crawling into bed, happy to be prone, when Rick came in and said "happy birthday". I thought he'd become confused, but realized that the big birthday present that hadn't come last week had arrived while we were gone, and he couldn't wait to give it to me. I love it. 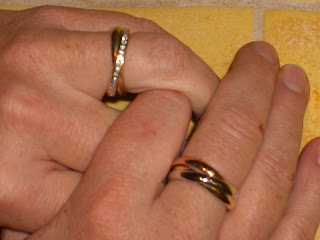 It's there on the right. Years ago, I designed my wedding and engagement rings as a pair of intertwined rolling rings; I have long wanted (in a sort of long-term, on the list of non-essential desiderata way) a traditional rolling ring to wear on my other hand. Rick hunted and hunted (apparently, they are far less common than they once were) until he found one just for me, and ordered it for my birthday. This is a particularly big deal, as he isn't usually a jewelry-giving husband (I'm not complaining, btw, so much as observing), but he really came through in spades this time. Being the easily entertained person that I am, I'm having fun rolling it up and down my finger, watching the colors change. Heh.

We came home to rain, and I'm delighted (you can see in the mitten picture above that it's given me an opportunity to wear Kauni). 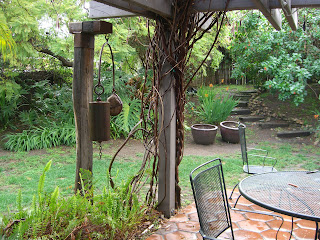 It's wet. And I love it. I've caught up on email, and will be catching up on blog reading slowly over the next couple of days, and now I can go get Tilly from the vet and get some work done.

I hope you all had wonderful weekends, too!
Posted by Knitting Linguist at 9:57 AM

Sounds great - and a chance to wear the woolies.

What a lovely weekend and a fabulous homecoming

I like the image of 3 year old grinning ballast.

Not to mention those super happy eyes in the one photo.

Love those birthdays that just go on and on ... sounds like a great weekend!

Hokey smoke! What a glorious weekend! The mitts are great, as is the edge of Kauni.

What pretty rings! (Both of them) and a delightful BD gift - you do have a good guy!

And I'm sorry, but that kind of pain (wind chills, freezing?) just doesn't sound worth it - tho' I know there are lots of people who love skiing - for me? I just remember that I'd be the one who broke a leg...
(((hugs)))

I remember tire chains . . . now the Michigan law says we can use them when it's snowy or icy enough that the chain doesn't contact pavement.

And then you go home to green. Our snow is all melting away under 50 to (supposed to be) 60 degree F temp.s, but what's under there is mostly not green!

Glad you had a good weekend! I've never managed to get past the leery part of skiing myself, but kids seem to give in pretty early. It's great that they're getting to a point where they can enjoy it, too.

Your birthday ring is beautiful; I understand how special it is for a non-jewelry husband to go for something like that. (Branden would be more than happy to buy jewelry...it simply doesn't occur to him to buy things like that.) They make up for it in other ways, but it's nice to be completely surprised once in a while, too.

Great post. Can you take Penelope with you next time?

Can't wait to see the ring(s).