Believe it or not, I have been knitting. And today I even have something to show for it. (I know, I know; I really should give y'all more warning before coming out with something so shocking.) 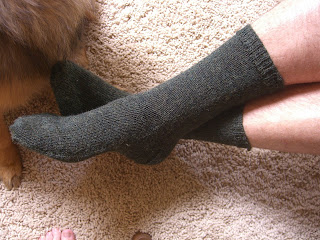 A whole pair. Size thirteen, even. Finished in time for Rick to take them along on his business trip this week, should he choose. I'm pretty darned happy with the way these turned out. The color in that photo is wrong (in rereading this post, I realize that this is going to be a theme for today); they're actually a very very dark forest green, which is quite pretty (although hard to see sometimes). 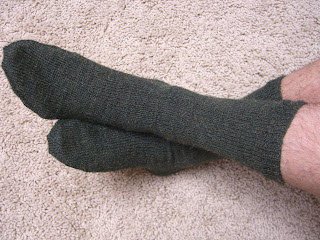 These were knitted top-down, with about an inch and a half of 1x1 rib at the top, and a regular heel-flap and gusset construction. I used Berocco Ultra Alpaca Fine yarn, which I quite liked, although I thought it was a little splitty. I used two circulars for these (size 2), although that's not my usual MO; generally I prefer dpns. But with this many stitches (68), I've found that everything goes faster and more easily on two circs. I think I'll do his socks that way generally from now on. Other than the top ribbing, they're plain stockinette, which worked out really well for these socks, since I knitted them mostly at the conference, in the car, and at the movies the other night. If they'd had any kind of patterning, I don't think I would have finished them so quickly.

I'm also working on the Rogue Roses socks for me (these are from the latest Rockin' Sock Club installment). 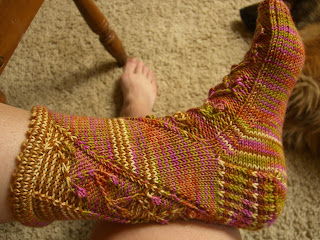 (Note the random bits of Tilly that keep appearing in these pictures; she really wanted to get involved this morning.)

I like these socks quite a lot, although they do require some paying attention and concentration. But they're fun, and I think I'll wear them a lot, even though they're knitted in STR mediumweight and I'm usually more of a lightweight person. I'm using my size 2 Signature needles (dpns), which I love so very much that I'm considering getting a set in size 1. We'll see. Mother's Day is coming up, after all (isn't it?)(given that I keep dating things March -- some kind of Freudian thing, I think -- I clearly have no idea where I am in the calendar year).

Aside from those two projects, I've mostly been swatching and dithering. At the moment, I'm swatching for Anne's Ondule (imagine an accent ague over that last e) sweater, which I adore and am going to knit just as soon as the pattern's ready. Not only is this sweater great, and something that I think I'll wear a ton, but the yarn I have for it is making me tremendously happy. A while ago, I saw a lovely bump of BFL fiber at Briar Rose and decided that I really wanted a sweater in those colors; I also realized that I probably wasn't going to be able to spin fast enough and then knit fast enough to wear the sweater this summer. So I emailed Chris (whose title really should be something like The Fabulous Chris) and asked her what the chances might be of getting some Grandma's Blessing yarn dyed up in that colorway. She was a bit worried about it, since they're different fibers, which means that they react differently to the dyes; and it's true, this color is a bit different. And gorgeous. Really and truly, warmly and colorfully, gorgeous. Honestly, I'm dying to knit up this sweater so I can wear it everywhere (because I will). So I've swatched (fair warning: the pictures just don't do the colors justice; I'm going to keep trying). 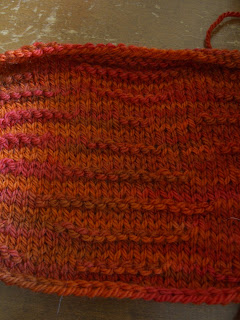 See? Everything from pinks to burnt oranges. Mmm... 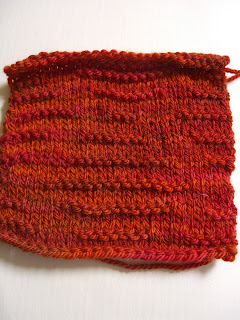 Still not quite the color that it is in real life. Sigh...

Meanwhile, I've also been swatching for the little shell I've been wanting to knit for myself for a while from some Louet Euroflax I picked up. I only have three skeins, which is 810 yards, so I'm bit worried about having enough, but I figure for a very short-sleeved top, that should work, no? I wanted to use it to knit the Slinky Ribs sweater from Custom Knits. 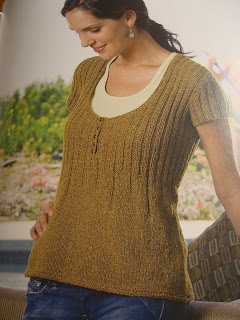 But when I swatched it, it turned out that there was some bias in the stockinette section. 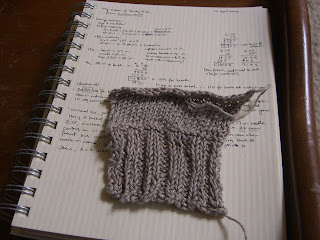 (That color is dead wrong, by the way; it's much more of a very bleached tan - maybe the color you'd expect of tow?)

So I developed this crazed notion that somehow everything would work out better if I put the stockinette section at the top of the sweater and the ribbed section at the bottom, starting just below the bustline. I don't know that that's going to make any difference, but it did seem to me that I'd end up with a more shapely sweater that way, so what you see there are the scribbles that are meant to help me knit such a thing. Given the potential dearth of yarn, I've decided to knit this thing top-down so I can try it on as I go (this would also mean that I'll have a good idea if that biasing is going to be mitigated by the ribbed bottom before I get too very far). The funny thing is the fact that I somehow find starting a top-down project so much more daunting than a bottom-up one. I don't know why starting with two fronts and a back and then joining them seems more difficult than starting with a body and then dividing it, but there it is.

I'm just weird that way, I guess.
Posted by Knitting Linguist at 1:35 PM

Not weird at all. Or if so, then I am weird, too. There is almost no figuring for starting at the bottom. How many stitches, cast on and GO. I prefer top down, but sometimes do bottom up because I want to start right away.

I like the idea of top down, but then I have to make all the neckline decisions Now. I seem to be happier bottom up. So far. How many sweaters have I made? For me? I believe that would be one.

You know, I like those gray socks (that aren't really gray). I wouldn't mind a pair like that...

Beautiful yarn for the even more perfect sweater!

That orange is gorgeous! Wish I had some knitting to show. Alas, the batts occupy my time.

Not weird, but a closet math geek, I suspect. I love that pattern & have looked at that pattern a number of times but I think I am the wrong shape for it. I will get a vicarious thrill from your knitting (again).

And where's the bracelet pic??

Me too on that last part.

Re the socks--wow. I know, they're forest green and not charcoal, but, the last pair of socks I made was dark charcoal size 13. And that's part of why they were the last pair.

I think it probably has something to do with the way we are taught to knit, that's usually what we find most comfortable. I do like the colour of that yarn. Congratulations on the sock finish

ooooh, the briar rose yarn is scrumptious!
i don't think i'd have the patience to knit the STR socks but they are so pretty!

Lovely stuff...even the plain vanilla socks! And I ditto the call for the bracelet photo...
(((hugs)))

Great socks - whatever the color!

Looking at the photo a second time, I think the biasing is intentional. It gives it that movement - hope I'm making sense here.

Socks on two circulars - I'll have to try it soon as I'm teaching a sock workshop later in the year and better be prepared for all questions!

But not yet. Last night I cast on for an adult sized Aran jumper [in one piece, botton up a la EZ]. Hope mum likes her 75th birthday present - I won't be blogging about it, not even a hint; mum sometimes, randomly, reads my blog!!

Love Rick's sock. I'm so fond of stocking stitch socks. Plain is the way to go. I also love your rose socks and that swatch. Well you know my color preferences...sigh...that swatch is a gorgeous color even if it is only that color on my screen...

That's quite a bit of knitting! I like the socks (and congratulations on finishing the 13s!). And I think I agree about top-down vs. bottom up (for sweaters); I have no idea why I prefer bottom up, but I do. Maybe I'll have to try top-down again to see if it's really a preference, or a rut. =)

Often I find that biasing in the round works out fine. It's that stinkin' biasing in a piece that is supposed to have nice square 90-degree corners that messes me up!

That sweater is beautiful.