There and back again

(Note: I was not saying aaahhh in any kind of relaxed way this morning as I faced eight billion loads of laundry, an empty fridge and a full inbox. The "aaahhh" sounded a bit more hysteric at that point.)

It's been a crazy couple of weeks. After my last post, I packed up and headed up to Santa Barbara for a two-day conference. I got a lot of knitting done while I was there -- all of that sitting still and listening was very good for plain knitting -- and finished most of Rick's first sock, as well as most of my first sock from the latest Rockin' Sock Club installment. I stopped Rick's sock short of the toe, because I've been afraid that I won't have enough yarn; I'll knit both of them to the toe, and then if I have to, I can knit the toes out of another yarn. Even aside from all that knitting time, though, the conference was wonderful. It's very rare to go to a workshop at which every single paper is interesting (very rare, indeed), but this was one of those occasions. I didn't get drowsy once, which has to be some kind of record. Not only that, but all of the people who were there were interesting to talk to, which made the speaker lunches great fun to attend, rather than some kind of chore. As for my paper, well, no-one laughed, and people said afterwards that they found it interesting. This could either be a good sign with regards to my paper, or an indication of how polite and kind the attendees were. Since it was clear from my conversations with them that the attendees were, indeed, polite and kind, I'll leave it at that.

I then drove home quickly and, after a twelve-hour turnaround, headed right back out again. I felt very harried until we were on the road, and then I was glad that we'd decided to take our trip, in spite of the timing. I worked on Rick's socks, and on my socks, but I didn't get as much knitting done as I'd thought I would, doing all that driving. I did a lot of sleeping in the car when I wasn't driving those first two days; catching up, I suppose. Our first stop was Tucson, to visit my best friend from college; we had so much fun catching up and cooking and helping the kids decorate Easter eggs that I took nary a photo. Trust me, it was great. It was the perfect way to start our trip, and to break up the long drive out to Santa Fe.

Our first day in Santa Fe, we left town entirely and took the girls to Tsankawi, an unexcavated mesa-top village site in Bandolier National Monument that Rick and I had hiked when we first went there years ago, and which we were sure the girls would love. We were right. (In fact, one of the best bits about this whole trip was discovering just how much the girls enjoy many of the things that we both love, too. I mean, I know there's some causality there, but still, what a relief! They could, after all, find hiking and ruins boring in spite of all of our enthusiasm for the same. It's been known to happen with kids.) There were ladders to climb up to the mesa-top. 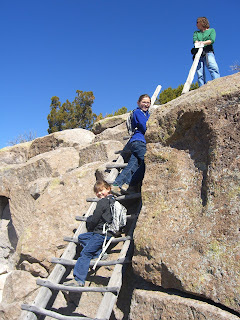 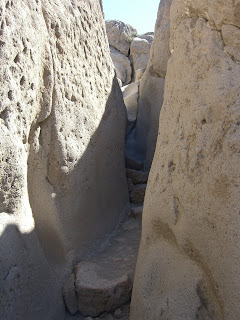 And once we'd gotten to the top, there were pot-sherds to look at and carefully put back in place. 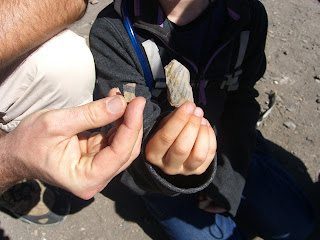 After looking around at the midden, and at the lines formed by the ruined walls, we climbed another ladder down to the south-facing cliff homes. We did not (most definitely not) use the original hand- and toe-holds dug into the rock. (That, by the way, is looking almost straight up.) 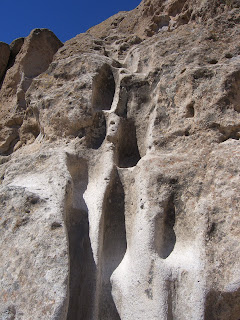 (I should note here that this whole trip was, as I'd expected, a bit of a challenge for me, given my fears regarding the potentially calamitous combination of active kids and sudden edges with long drops beneath them.)

The view from those south-facing homes in the cliffs was amazing. 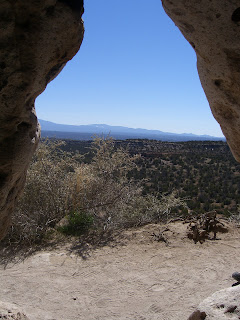 As was the sense of the time-depth of the place. I feel that way throughout the southwest; the continuity and timespan of inhabitation, of people adapting year by year to a changing environment, for hundreds of years, leaves me awestruck. I can't help but think that people lived in some of these places, continuously, for upwards of 700 years. And then they didn't any more. And we think that our couple of hundred years here is so long that nothing could move us.

I'm sure that every civilization, ever, has felt that way. And then something changes. It makes me wonder about all of the things that could shift for us, all of the things that might shake our seemingly unshakable place in this world. Walking, quite literally, in the deeply-worn footsteps of other people, people who raised children (worrying about those edges!) and cooked and spun and did many things that would look familiar to me, who then faced and survived unimaginable shifts in their lives and places to reach where they are today, creates for me a deep sense of connection, of commonality. And it makes me wonder what lessons we should be learning from past experience. I think that we (whoever "we" might be) often feel that our culture, our world, is different from every one that came before, that we have achieved the permanence that was merely illusory for our predecessors; the one thing that I think all human cultures have in common is exactly that sense, that and the fact that things do, always, change. 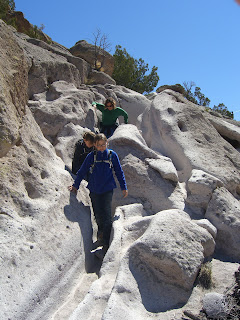 It takes a lot of footsteps to wear paths that deep. And it's worth feeling a little small sometimes, in the shadows of history. 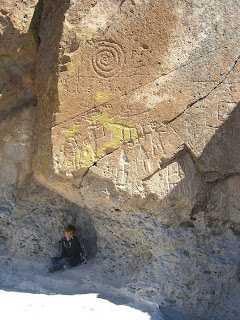 There's no way to do justice to all of the amazing things we saw in six days (and 2300 miles of driving) in one post, so I'll break it up. I'm looking forward to trying to do some catch-up blog reading, but with all of the posts that got written while I was gone, I may have to resort to the dreaded "mark all as read" function on bloglines. Meanwhile, there's that pile of laundry to be faced...
Posted by Knitting Linguist at 3:25 PM

So glad you are back safe and sound and that the trip was wonderful.

Your comments on the impermanence of societies were comforting to me, because of late I have been realizing just how fragile our current construct is. What with climate change and political instability, and antibiotic-resistant bacteria, I've been wondering if cataclysm isn't just around the corner instead of dozens of generations away as I'd always hoped. The way your frame it up, I see that instability has always been with us, yet we've always moved through it. Very hopeful. Thanks!

Kudos to your kids for appreciating it, and all of you for making the trek. Haven't been to that one yet, but I have been to Mesa Verde. Amazing.

welcome back! Reading along, I was wondering whether there was any other discipline that could frame instability as social glue, and came up with economics. What do you think?


(my verification word is dogersti)

Welcome home! I'm glad the trip was wonderful. I'm envious, as I've never been to the southwest and want to go at some point.

K and I are settled and I will take some pictures at some point. I'll let you know when you we get it up.

Good luck with the laundry.
Sarah

The joys of coming home! Looks like a wonderful trip, plenty of memories for the girls

I love the southwest and Bandolier especially. Lucky girls. I enjoyed the musing on impermanence and our current worldview. I work in a building built in 1930, and I like to think about all the feet that wore the soft edges into the marble steps. And that is such a short time ago. Welcome back. Don't you hate unpacking?

Wonderful post! And I love the photos...I've never been to the West, and seeing it like that makes me really want to go. Your musings re community and change spark my own thinking...deep thoughts.
I missed you!
(((hugs)))

Welcome back! That's a long drive, though. Sweetie spent several years in New Mexico and wants to take me there someday.

When I find crinoid fossils on the Lake Michigan beach, I feel like that. All those strange-looking, saltwalter animals, for thousands of years, gone now, but so many of them that we are still finding their remains.

Welcome home! Glad you had a great time!

I am right there with ya in regards to kids and cliffs.....very cringe worthy!

(and I don't mean the laundry)

wow, what a fun place to visit. and thank you ever so much for placing the pottery sherds back in place. that's great the ruins can be left there for people to enjoy - it's a much better way to understand history than a museum or glassed-in display.

A great sorrow of my life is that we were never able to afford/take the time to take our kids to experience the beauty and awe of walking through narrow canyons, experience the silence of ancient tucked away dwellings, smell the sage and clean, clear air of the high desert lands I roamed as a teen.

It is amazing to look at ruins, isn't it? When I was in Spain in high school, we went out and watched the sun rise from a wall that the Romans had built. It's an amazing feeling to be sharing a place with long-gone societies. I don't blame you for the children and cliffs anxiety, though. Toe holds??