That's what this post has to be. I've distracted the children by asking them to clean their rooms (I won't see them again until next month, if I'm not careful), so I have a few precious moments to post before the next thing comes along. 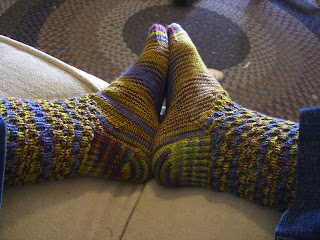 There they are. The anemone socks. I finished them last night at a meeting at a friend's house, and put them straight on. The non-knitters in the group stared at me a while as I was knitting, until finally one of them asked: "Are you knitting socks?" She was far too polite to make the usual five dollars at Target comment, but it was there on her face. Once they were on my feet, though, the looks got a bit more speculative. No-one asked to learn how to knit, however, alas. Next time. 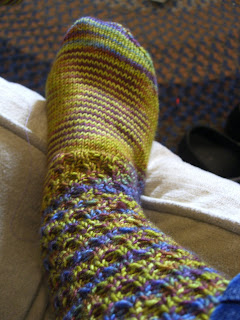 I did get lots of compliments on the colors, which pleased me because I adore this colorway. I may have to get another skein for myself -- I'm sure I can think of something to knit with it, right?

So, to recap. These are the Anemone socks, from last fall's Socks That Rock sock club, in the Tide Pooling colorway (lightweight). This motif must eat up yarn, as I used far more of the skein than I usually do (although this was by no means a nail-biter, there was plenty of leeway). I used my size one celtic swan dpns, and didn't modify the pattern (except I think I messed one bit up and had to fudge, but I won't tell if you won't).

I promptly wound the yarn for this month's sock club installment, and I cast on today (pictures at some point, I promise; this is a great pattern). I'm also knitting Rick's socks again, but this time with no patterning, so they'll be something I can knit during this conference/workshop/thingamajig that I'm about to head off to. That means that at this point, I have two active projects OTN, and they're both socks. I'm OK with that, since we'll be doing a lot of driving and travelling next week, and having two small projects, one simple and one more complicated, seems like a very good idea.

The flowers are out in full force around here. 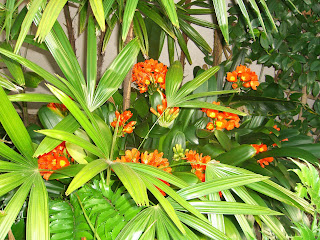 The azaleas are in bloom (these bushes, tucked under on of our big old pepper trees, make me happy every year). 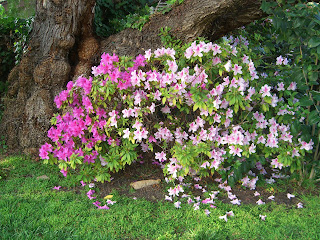 And Tilly is full of energy. 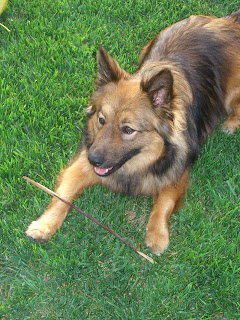 I am not so full of energy right now, as this week has been insane. I've almost finalized my presentation (still three minutes over, drat it!), put together a handout to go along with it (that's how I cut five minutes off the time to start with), written an Institutional Review Board application with supporting materials, and put together an application for a small internal grant. On top of that, we had some family stuff happen this week that required a lot of time to deal with; it's going to be fine, but it took precedence over everything else, and added to the general sense of franticness.

I leave tomorrow for my conference, and again immediately after getting back from the conference for our road trip (this one's for pleasure) to New Mexico. So it may be that I'm not able to post again until I get back, just after Easter. I'll be taking lots of pictures in New Mexico, though; there's even one fiber stop in the works, which I'm very excited about. I'm dreadfully behind on reading blogs, but I'm hoping that the hotel I'm staying at for the conference will have wifi, and maybe I can catch up on my reading as a reward once I finally lose those last three minutes from my presentation (this is like a diet, but harder). That seems fair, doesn't it? Now the question is what I should pack to wear, and whether I should also pack along my bottle of Talisker...
Posted by Knitting Linguist at 6:45 PM

Good luck on losing the verbiage.

LOVE the socks...LOVE.THEM. You did a great job. And I have to tell you that tonight? I got asked what I was making: answer: socks. Then I heard how "Mom crochets."
(sigh)
I HOPE your trips are smooth, delightful, successful, fun, and I truly hope that application you finished is approved and the funding comes thru!

Let's have all GOOD stuff happen for about the next 6 months? Tall order, I know, but I'm putting in my request right now!
(((Hugs)))

Love the socks, good luck on the talk. It's agony to cut those last few pieces. Have a good conference, and hope everything's ok family-wise.

Hope all goes well with the conference and enjoy the trip away.

Good going with the socks, Spring colours. Good luck with your talk at the conference, all will be well :^)
Only two projects? heh.
Tilly is looking exceptionally beautiful :^)
Have fun!

I finally skimmed and marked as read all blogs and even ended up deleting some feeds so I can add more...I am off for a family wedding this afternoon and the what to knit question always trumps the what to wear! Have a good conference and vacation.

Happy trips! I am finally moved and doing nothing today . . . maybe some knitting soon.

All the production happened at once!

And, like a diet, there is a good chance the three minutes and more will come creeping back... No, I know you will not allow that!

Socks are lovely, socks are good. I think you need some for yourself. I have the urge to start something large for myself, disregarding the large things for myself that I've already started, and that I haven't finished That Sweater.

By the way, the other day I was telling my son about your visit with the penguins. "What kind?" "Macaroni" "Oh, those are the ones with the feathers like this, but shorter than the rockhoppers." I live with a 6 year old penguin expert! (And only a linguist would notice and comment on how they make their sounds - on exhale and inspire.)

With socks like these, we need anemones... (ducking!) Beautiful!

good luck with your presentation! the socks are lovely :-)

Breath, deep and with some attention to the simple slow act of breathing, advice I run on when life is busy and when the family throw me curve balls. Those are nice socks .. I would not be surprised if one or two from that meeting sidled up to you over the next month and quietly initiated a how hard is it to knit socks discussion. As a Chair at conferences where speakers blindly attempt to go well over the time allowed - I applaud your trimming.

Take the bottle and have a great time! See you on the flip side ...

I love New Mexico. Looking forward to the photos.

Definitely the Talisker - it will make the 3 minutes disappear!

Would it help to just talk faster? LOL

Have a good trip!

I love the socks! I love that colorway too except the skein I have does not have so much of the blueish purple. (At least skeined up it doesn't look like it does!)

You should totally get to reward yourself for getting rid of three minutes.

Ooh, beautiful socks! I wouldn't be surprised if some of your non-knitters are seeking out their mom, sister or knitting friends and asking, "so, is it hard to learn?"

I was knitting a sock in a restaurant yesterday, and the waitress commented, showed me her lovely beaded jewelry, was fascinated by the self-patterning yarn. And said, "I know how to knit, but I've never made socks..." but she's definitely thinking about it now!