This is a week of lists. Yesterday morning, Older Daughter and I headed out, lists in hand, to visit no less than five different stores, getting supplies for three birthdays, two father's days, a graduation, a trip, and a spinning lesson for second graders. We actually got most of it done, too. And this was after baking two cakes on Monday morning: one for Younger Daughter's birthday snack at school (carrot cake with cream cheese frosting, a favorite of my girls, although most of the kids in the class had apparently never been confronted with carrot cake before and found the whole thing confusing until they tried a bite; then they got on board), and for her birthday dinner that night (chocolate cake with a chocolate frosting that tasted just fine but that I will never make again; can I just say burnt sugar catastrophe?).

Tomorrow morning, I'll be making Rick's birthday cake (a spice cake with grated butternut squash in the batter; I know how it sounds, but all I can say is that no-one has ever not had seconds of this cake, even those appallingly self-controlled "just a sliver" people), and his requested dinner: beef burgundy. While that cooks, the plan is to gather fiber, spindles, and a wheel for my visit with Younger Daughter's second-grade class, where I'll teach seven students about spinning (which fits into the Fundamental Needs of Man unit they did this year, clothes being a Fundamental Need of Man -- women, apparently, not so much). They'll all go home with their own spindles. 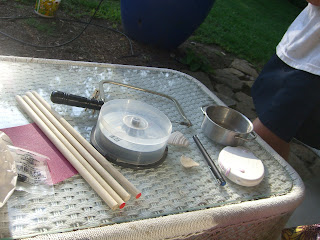 To that end, I gathered 16 CDs (we're making an extra spindle to show them ahead of time), 8 cup hooks, 8 rubber grommets, and eight dowels, ends sanded, and a starter hole sunk in one end for the cup hook. Once the prep work is done, they go together really fast (no glue, which was the bonus of this particular spindle recipe, and made the trouble I had finding the rubber grommets worth it), and spin beautifully. 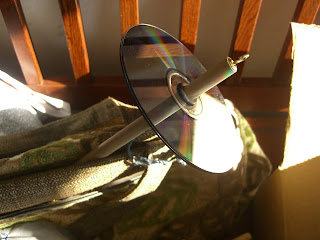 They're even kind of pretty, no? Because each spindle has two CDs, held together with the grommet, you can make them with two silver sides out. If I can remember, I'll bring some sharpies along and the kids can decorate them if they want.

I have to admit that the guys at Lowe's seemed utterly confounded by the whole thing. "What did you say you're making again?" asked one nice man, rather plaintively, after helping me find the grommets. Heh.

I've also been knitting up a storm this week. I finished the first half of Hillflowers, and it's on waste yarn and waiting to be grafted to the second half when that's finished. 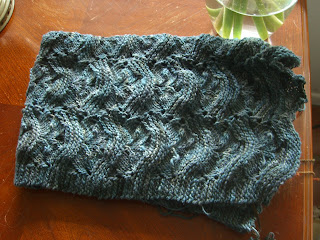 My goal was to get one half done now and to bring the other half along on the trip. This pattern is so easily memorized that it can actually be travel knitting, and since I'll only have to knit one half of it, it's not too big to pack easily. 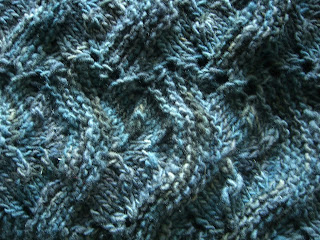 I can't tell you how tempted I was to block the first half once I finished it. But since I'd just have to block the whole thing again after grafting it, that really didn't make sense, and I held off. That gave me more time to work on The Behemoth (AKA Shawl That Jazz), which is big enough that I'm starting to be really glad that I changed my plan to make this my travel knitting (mostly because this trip will be tight on space). 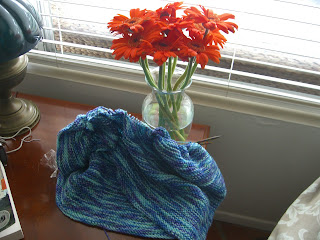 I am into my second skein of yarn, and I have high hopes of finishing this before I leave, or maybe while waiting in the airport at LAX. It's very cozy and warm without being heavy, and I really would love to be able to wear it on the trip. So right now, it's all garter stitch, all the time. I'd keep my fingers crossed, but it'd only slow me down.
Posted by Knitting Linguist at 6:56 PM

That's a lot of birthdays! The cakes sound yummy...especially the butternut one.

Those CD spindles look great! That will be a fun project for YD's class. Especially for the Men. Then, when they're all grown up and work at Lowes/drink at pubs, they'll know where their fiber comes from, and what grommets should really be used for...

I do hope you can finish STJ shawl quickly. The nice thing about it though is that it keeps you warm while you knit it.

You do have a lot of birthdays all at once, don't you? A Happy Birthday to All!

I've used courgettes(zuchinni) in cake before now too, it was with great satisfaction that I saw the boys eat it all. Now they can't tell me they don't like them!

Those spindles look fantastic. I am sure they will have as much fun making them as they will using them

Your Jazz looks nice, I am sure you will finish it in time.

Carrot cake is one of my faves.... those I'd be content with just a bowl of cream cheese frosting.

I hope the spinning lesson goes well... I think it's great to teach kids stuff like that... as I child I was fascinated by the looms at the pioneer village

Hillflowers is looking lovely and I love the yarn

CA kids who have never eaten carrot cake? Where did all the old hippies go? Will you share the recipe or location of the spice cake with butternut squash? Sounds good to me.

Wow. YOU'RE busy!!!
Shawl that Jazz looks fabulous. And that's a novel idea for making a spindle! I hope that event goes beaufifully for you too...

Are you carrying your laptop to Scotland?
(((hugs)))

My favorite carrot cake is very light, and most people think it's made with orange zest. Which is also present. Filled with whipped cream and covered in chocolate. (so not so light in the end) Oh, how I wish I could have some now!

I happen to love garter stitch, especially in a yarn like that. Watching all the colours play together while you make something squishy and cozy. I can see it now. I'll be making one of those shawls.

(and your post seems to be all about me!)

I can't wait to hear how the spinning lessons go!

Lots of events! and shopping.

Crossing fingers for you on Hillflowers!

Ever try butter nut squash pancakes? They are pretty good too.

So with all the birthdays, lists and cakes how are you getting all of this knitting done? I'm feeling a little lazy. You

Love the spindles. The kids will have great fun.

Spice cake is my favorite (I'm intrigued by the squash and will be needing to make an addition the next time I make it) followed closely by the carrot with the cream cheese frosting...

The CD spindles seem like a really excellent idea. I hope the kids have fun with those. Women are supposed to wear clothes??

I hope you get your shawl finished. Both knitting projects look gorgeous (I'm ignoring the blue). There is something about garter stitch that really makes me happy though.

We, too, are embarking on birthday season, with my oldest daughter, my youngest daughter, and mine all spaced out about two weeks apart starting today. It is one of the best times of the year. Happy days to your birthday girl and boy!

And my Christmas pudding recipe [handed down from my nanna] has carots and apples in it for moisture!

I am drooling over your cake descriptions. I love homemade carrot cake and spice cake.