Yesterday I finished Anne's David socks that I'm knitting out of (you guessed it) Grandma's Blessing for Chris over at Briar Rose. I can't tell you how tempted I am to keep them, because they're absolutely beautiful, and so comfortable and squishy, just what socks should be. I have enough yarn to knit a pair for Rick, but I'm kind of thinking that maybe I need them more than he does.

It's amazing what one can do with the fine art of justification these days, isn't it? 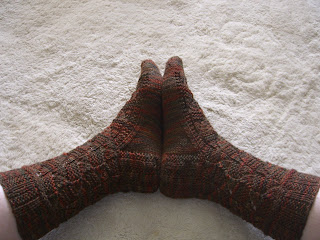 These were an extremely quick knit, partly because the pattern is very intuitive, and partly because I was knitting the smallest size, which didn't have a whole lot of stitches. 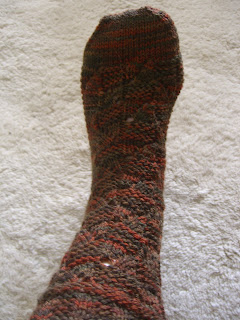 Aren't they fun? They're definitely man lace -- Rick said he would wear a pair -- but they're not so manly that they're not right for a woman, too. 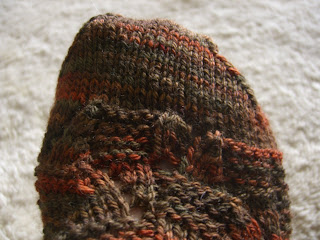 So, there they are. 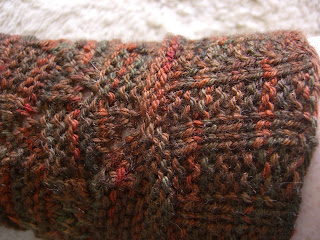 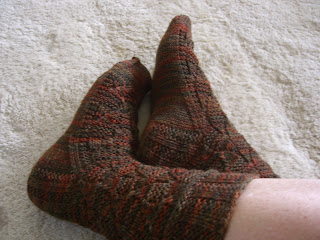 And I even finished them early enough that I was able to get to the end of the first of the Fraggle socks as well. I'll put some pictures of that up next time.

Part of the reason that I was able to knit these up so quickly is because it was a relatively quiet weekend. Saturday was a soccer day, and Older Daughter's team really outdid themselves this time. It was a true nailbiter, 0-0 until the last two minutes of the game, when Older Daughter's team scored. Very intense, lots of knitting time. And the rest of the weekend was devoted to doing things like laundry (loads and loads and loads of it), which includes down time between loads and folding and putting away. So, a row here and a repeat there, and wouldja look at that -- socks.

This week should also have some knitting time, although at least some of it will have to be stockinette or garter stitch -- Younger Daughter's spring concert is Thursday night. These concerts are often interminable (last year it was close to three hours, and people, I adore my girls, but that is seriously way too long for a grade-school spring concert), so I need to be prepared for some serious knitting. This might be the chance I've been waiting for to cast on for Shawl That Jazz to see how I feel about it in the yarn that I ordered. On the other hand, I'll probably be casting on for Hillflower tonight, but I'm afraid it'll be too dark in the theater to work on lace safely. I think it'll be OK to cast on for both; at the moment, the only projects I have OTN are the second Fraggle sock (which isn't even technically on the needles as I haven't cast on yet), and the Interminable Shell, which I'm not in a huge hurry to knit, and will work on at knit night this week. So it's OK to add a couple of things to the list, right?
Posted by Knitting Linguist at 12:30 PM

Socks look great. I love the colours in that yarn!

It's always ok to add to the list. My husband would never wear socks like that, man lace or no. Anyway, they were much faster to make for yourself, right? That justifies it in my book.

the socks look pretty, I think you really need a pair!

and you must cast on for the jazz thingie to make sure you have a big project to take with you.

I like the socks, and wish you well on the concert. Our fall concert was so long that they split it into two nights this spring. We had to go to both nights, but both were excellent--and barely more than one hour to 90 minutes a night!

Pretty socks :-) And I understand the need to reevaluate your knitting projects. Now that I'm out of school, I have all kinds of plans going. A few things that have to get finished first, but then . . .

Pretty socks :-) And I understand the need to reevaluate your knitting projects. Now that I'm out of school, I have all kinds of plans going. A few things that have to get finished first, but then . . .

Of course it is OK to cast on for both. But I kind of think you weren't really expecting anyone to try to dissuade you. You know us too well.

It's fun to see how the pattern opens up in those socks when they are worn. Very handsome!

What's a few more things on the list? Sounds perfectly manageable to me. =)

The socks look great. I need to start thinking about socks for next fall...

Beautiful socks! (And three hours? What were they thinking?)

All these socks that keep appearing here are going to tempt me to try some. I almost succumbed this week,lol. These look lovely, especially in that colour

Three hours is waaaaaaaaaaay too long for any school concert! Primary school was bad enough but high school - all those pubescent boys with breaking voices who fancied themselves as singers was t-o-r-t-u-r-e!

What a perfect combination of colorway and pattern!

Sure you don't have anything else hidden away? That's a very short list.

Socks look cushy and cozy. I'd like to squeeze them.

Hillflowers looks cute. Those David socks are really perfect, I'd be tempted to keep them too.

Hope the concert was lovely, short and you got some knitting time in!

Three hour school concert??? Yikes - that's enough to drive doting parents away. Not even an engaging movie can hold my attention for three hours. Major knitting time, for sure.