I am so close to being done with Elektra that I can taste it. I only have four more rows on the collar to go, and then I need to mattress stitch the underarm seams, and weave in the ends, and it's done. I should note that as short as that list is, it's going to take longer than it sounds like to complete. First, I have no idea how to mattress stitch anything, let alone a garter stitch seam whose colors change every little while, so that's going to require some studying and figuring. Second, because of all of those color changes, the whole weaving in of ends process is going to take a while. On the bright side, weaving ends into garter stitch is a cakewalk. So, as soon as this post is up, I'm going to start a load of laundry and then settle down with an audiobook and my knitting to wrap this project up. I figure it might be good luck to wear it to the girls' playoffs the weekend after next, as I've spent every single game this season working on this thing. It seems appropriate.

While I don't have any knitting to show off right now, I do have a few acquisitions to share. I have been on a very serious yarn diet, and have been really good about following it (having two sweaters on the needles hasn't hurt), but I will confess that I bought some fiber. Some of you may remember that, quite a while ago when I first bought my Traditional, I bought some lovely Jacob roving at my local farmer's market from Kathy of Rancho Borrego Negro. I spun it up into a two-ply yarn which I have long adored. 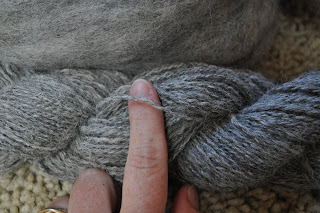 It's been in the back of my mind for quite some time now that I'd like to spin myself a sweater's worth of yarn (I have heard again and again that spinning a pound of a particular fiber is a great way to work on consistency and control in spinning), and, given how much fun I had spinning this yarn when I was a rank beginner, and how much I love the results (this yarn has a lovely soft hand), it seemed like it would be a good idea to attempt to get more of it.

Thanks to Kathy's efforts and her willingness to search throughout her storage area, I succeeded. 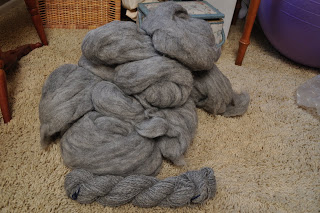 That's about a pound (probably more, I need to weigh it) of the loveliest Jacob roving you've ever seen. I am really looking forward to spinning it up. It's going to take some work to reproduce the grist of the original yarn, which I like, but the lesson in control will be good for me. I'd very much like to spin it on the Lendrum, but I think I'll need to get more bobbins before I do that; I only have four right now, and I've been told that in order to increase the consistency of the final yarn, the best bet with something like this is to spin all of the singles onto lots of bobbins, and then to switch the bobbins out during the plying. The other option is to spin the singles on one wheel and ply on another, which I may do. We'll see. 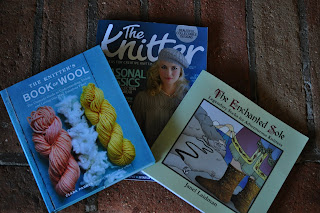 That magazine is the new British one that I've mentioned before. I like it a lot. It's not cheap. I should probably subscribe, which might save me some money (not to mention the fear that I'll miss one of them at the bookstore, since it's a monthly issue). I love that hat on the front, and there's a sweater in there that I may very well have to knit for myself at some point (although I think I've done enough of that lately; it's time to knit some things for the girls). I haven't dug into the Clara Parkes book yet (The Knitter's Book of Wool), but this is one that I've been waiting for with bated breath ever since I heard it was coming out (there are two fantasy books that I'm waiting for in the same way, but for various reasons, they are not nearly as on time in their publications as this one, alas).

The sock book is by Janel Laidman. It is one of those rare pattern books from which I would gladly knit a vast majority of the patterns. Honestly, I like nearly every single one, which isn't always the case with a book of patterns. But I think I want to knit myself the Traveler Socks first. 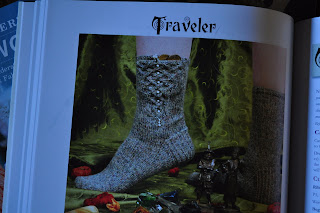 I don't know if you can see it in that picture, but there's a pocket in the side of that sock. How cool is that? I must have a pair for my very own self. Both of the girls have already found the book and picked out socks for themselves, too, so I guess I'd better get busy knitting.
Posted by Knitting Linguist at 12:23 PM

The girls aren't going to let your needles rest for long

Oooh, I love those socks, too!

I just bought Janel Laidman's first book, The Eclectic Sole, on the same basis you bought this one -- almost every single pattern is one I could see myself either knitting or drooling over whilst dreaming of knitting it.

And what may I ask, are you going to hide in that pocket? :)

I bought that issue of The Knitter while in Brooklyn and love the hat/sweater on the front, too. And I have serious intentions for the Starmore sweater in there, as well.

I have both Clara and Janel's first books - the second ones are on my wish list, for sure.

The roving looks absolutely marvelous. I imaging Tilly would love a nap in it.

Remember - with mattress stitch, you don't see it on the right side at all. I think you could use anything but the brightest color and it would work without worrying about moving through blocks of different colors - can't wait to see it!

Have you seen Harry's interview with Janel on Panopticon? Made me want to buy the book too!

Just reading about your spinning and knitting plans makes me excited to see the finished products and also to get busy on more of my projects! Love those travel socks! I'll have to look up that book!

Oh! I saw that photo of the books/magazine and went - What? She bought my stuff!
And I don't think you or I have discussed those in email...
lolol
I'm so impressed with your intention to spin the wool for your sweater! I'll be watching...
(((Hugs)))

I've been reading her blog and looking at socks.

But I just got Knitting Lace in the mail (finally!) and I'm sticking to my fraternal twin lace projects for now.

Can't wait to see the sweater yarn. I hope it turns out exactly as you hope. I need to look up the Enchanted sole so I can see the pattern before I buy it, but I'm totally interested in the Book of Wool. (And the Book of Yarn for that matter.)

Those socks in Enchanted Sole are just the thing for your daughters, I imagine. I loved them. Too bad I am such a lazy sock knitter and only do simple ones.

Have fun with all that spinning

Catching up on blog reading, I read this post after the next, and it makes the bathrobe post just that much more difficult. Ouch.

I think you should console yourself by spinning some of that Jacob roving. It is absolutely beautiful. I am a sucker for greys, too. It's worth breaking the diet every once in a while, and this is definitely a worthy moment!

I love pocket socks. When I was a kid, I always had a dime, or a quarter, or whatever it was for a phone call, folded up in a bit of scratch paper. The shoe always seemed like the right place to put it.