What a week. The final installment of the Jury Saga (I know, it sounds grandiose, but hey, I've now invested so much of your time in talking about this that I was hoping grandiose might make everyone feel better about the whole thing, heh) is almost anticlimactic. I reported at the courthouse at 9:30 on Wednesday morning, as ordered, knowing that if I didn't manage to persuade the judge that cancelling classes for 110 students who would not be able to replace those classes at this late date constituted a hardship, I'd have a chance at my voir dire appearance on October 15th to convince either the defense or the prosecution (or both) that they really didn't want me on this trial. One of the court attendants told me that she thought we'd be done and out of the courthouse by well before lunch on Wednesday.

I sat on the cold, hard floor of a courthouse hallway with about 150 other people (who thought they'd get through 150 people in a few hours?) until I was called in with the last group at about 3:30 in the afternoon. I spent a lot of that time reading for the paper I'm presenting in December, chatting with the professor from Palomar who was sitting next to me (and preparing to make the same argument I was before the judge), and finally, when I just couldn't focus on anything meaningful anymore, reading Kathy Reichs' new book (picked up from the library for just this purpose) and knitting Rick's sock at the same time, to the great entertainment of everyone around me (apparently knitting and reading at the same time is a sort of parlor trick in sophisticated courthouse circles; I recommend it highly for anyone in a similar position -- it's certainly a quick way to start a conversation, at which point you will no longer be reading and knitting, you'll be talking and knitting, but you'll at least be entertained).

At 4:00, a very nice judge asked me if serving on a trial of this duration would be a hardship. I told him it would. He asked why, and I told him about my students. He agreed that it would be a hardship for them and dismissed me with very polite thanks. I gathered my things and hied myself hence before anyone could change their minds. It was all extremely anticlimactic.

But I was still a little giddy and discombobulated in classes all day Thursday. Ask my students. (Whom I informed should be extremely grateful to me for pleading their case so effectively; between the furlough and the politics this semester, there was a teeny-tiny part of me that thought maybe sitting in a peaceful courtroom from 9-5 for five days a week for eleven weeks wouldn't be the worst thing in the world.)(Which I suppose says something about how bad things have been at work these past two weeks; I spent a not-insignificant portion of my break times at the courthouse responding to texts and voice messages about work politics, sigh...)

This means that I have not much new to report. I have finished the first sleeve on the Urban Aran, meaning that I have precisely one sleeve, one collar, and several seams to finish before it's done. I'm also on the second sleeve of Elektra, having attached the first successfully (a more complicated maneuver than I would have thought). After that, two fronts and a collar to go before that one's done. I'm on the ribbing at the top of Rick's first sock. So projects continue, even though the photographic evidence is lacking.

I can share with you, though, the Largely Unbloggable Project that I finished the other week. I only have blocking shots at this point, but I promise that once the ends are woven in, I'll get some action shots. 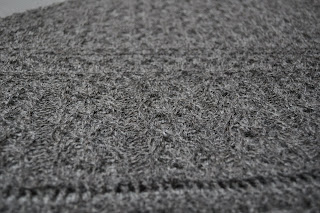 This is Anne's Dovecote Triangle, in the petite size. Talk about a fun pattern! This just zipped right along; I couldn't believe how quickly it knitted up. 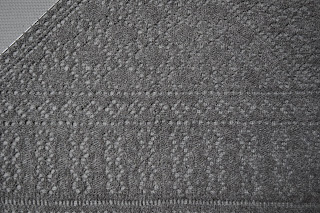 And the motifs are gorgeous, and, as always, the pattern just makes sense, which I love. This is knitted up in the yarn from Elemental Affects that I mentioned the other week, a gorgeous two-ply Shetland that bloomed beautifully upon soaking. 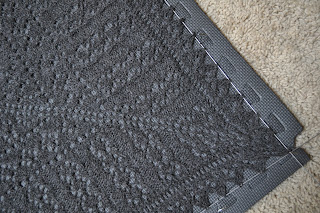 Because this is a woolen-type yarn, rather than worsted, I wasn't sure how well the lacework would show up, but once it was blocked, I think everything showed up very nicely. It's a warm, rustic shawl, and I think it's going to be particularly toasty and light because of the air that will be trapped in the more loosely-spun yarn. 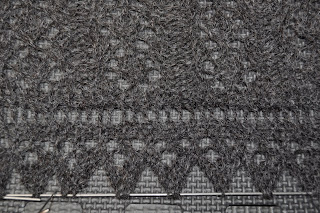 Edgings, of course, make me particularly happy. Aren't they wonderful? 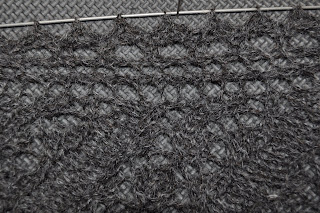 And now, the long shot. 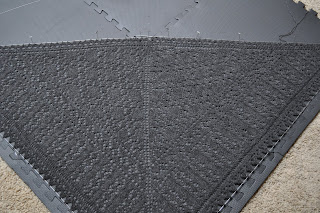 For now, I'm off to cast on a second sleeve, and then maybe just maybe, take a nap.

And I won't comment on the rest - we've discussed it already in email.
Take your nap. Feel lots better, soon. Less stress, please!
(for us both)
(((Hugs)))

Congratulations - and it always good for non knitters to see us do such amazing parlor tricks.

That shawl looks fantastic in that yarn...I think I really like lace in woolier yarns like that.

Very pretty shawl; the yarn shows off the pattern beautifully. And congrats on your escape from jury duty. Luckily for thee and me, there are actually quite a number of people who LIKE jury duty. Takes all kinds, huh?

fantastic Dovecoat Triangle shawl - every time you blog blocked lace it inspired me. Sounds like your knit live is full with the other projects roaring along. Congrats on the Jury release .. yes hardship on all 3 of the previously cited counts, students, family and upcoming trip. Plus the whole listening to crime and paying attention and being part of the judicial system in an intelligent way makes for a life draining experience - which while a valuable thing to do ... might not be what you need to do right now. Take care Stella

The knitting does, indeed, look very nice. I may be thick - or perhaps it's the different terminology we use - but what do you mean by woollen [our way to spell it] versus worsted?

I'm so glad you don't have to spend time on that jury. In Australia, if we've done jury duty once we don't ever have to do it again! I'd think with a population 10 times ours, that would also be true in USA. Perhaps you have more trials per head of population!

The pattern on the shawl is beautiful, doesn't look like you could get bored knittng that

It is a bit anticlimactic when you're all geared up to argue and someone just says "Yes, I agree."

My derriere groans in sympathy at the thought of sitting on the floor all that time!

WOW, that shawl is gorgeous!

I am so glad you got out of jury duty, I know as I student I would have had a melt down if I was trying to graduate and my professor had to cancel class!

Your shawl looks stunning and the large photos were useful again.

Did you really sit on the floor?!?
oops, we don't discuss that any longer.

Have a great week and much better than last one please.

Glad to hear it all worked out. The shawl edging is gorgeous!

hooray for no jury duty!

the dovecote looks gorgeous in that grey! I just bought some deep purple for it, that feels like a nice wintery shawl color.

I know that tinge of ambivalence at being told you can return to your regularly scheduled program, which is just what you wanted, even if it is kind of stressful in itself. I felt it, too.

Dovecote is so perfect in that color. What a comforting thing to look at. I'm glad you could share it!

The knitting is gorgeous, and congratulations on standing up for your students and having it actually work there that you did! Arnie, are you taking notes?...

You already know I'm glad there is no jury duty for you so I'm just here to say I love the shawl.

Those anticlimaxes(ices?) are always a little disappointing, but also such a relief! And I think I'd seriously consider courtroom antics over departmental politics anyday.

Here's to a smoother week, and more knitting!

Wow, I missed the whole 11 week trial thing - that would've been crazy with your responsibilities! I'm all for every citizen needing to do their part - but there's also time and place. So whew that you were able to postpone it.