Thank you all so much for the supportive comments. The roughness is smoothing out, and that's a good thing. I've been wearing my Urban Aran these last couple of days, as it's cooled off just enough (caveat: cooled off by SoCal standards, so there's no need to mock -- I know it's not actually cool at all) that I can wear it in the shade if it's breezy and I have a short-sleeved shirt on underneath. Heh.

I ended up restitching the zipper in the sweater more neatly, using the original stitching as, essentially, basting, and making the stitches even and more hidden. I think that this is probably the way to install zippers in general (I'm also guessing that everyone else in the world already knows what I'm about to say, but you know me -- I've just got to learn things the hard way). The basic process was to first pin the zipper in place in the sweater, while the zipper was zipped up, so that I could adjust it to sit evenly when closed. Then baste, with the pins still in and the zipper still zipped up (it is almost impossible to do a nice job of sewing this way, but the benefit is that it is possible to continue to check that everything is even on both sides as you go). The last step is to then open the zipper, and to sew each side in much more neatly, paying attention to hiding the stitches underneath the slipped stitch on each edge, and to making the stitches even and close to the zip on the back side. 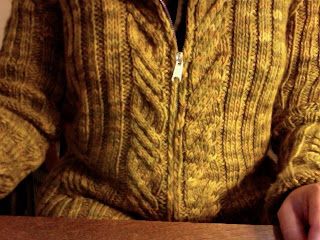 I don't know how clearly you can see that, but I think it looks much neater than before, and I will leave it this way, with the shorter zipper. As nice as the collar looks standing up, that isn't the way I'm most likely to wear it, given the weather I live with, and it makes much more sense to have it be a deep folded-over collar, which is how I've been wearing it. It has a bit of the shawl-collar feel to it, in a good way. (That's how I'm wearing it in the pictures from the last post.)

I've also finished the first of Rick's socks and have cast on for the second. I'm most of the way through the toe increases, remembering as before to increase only half of them evenly on both sides, and the rest only along one side so the socks will fit Rick's feet more closely. The trick is going to be to remember to make the heel flap on the correct side so that this second one will be for his right, rather than his left, foot. I'd better be sure not to start the heel flap in a meeting...

I've also been doing some spinning lately. I'm still working on the last of the fiber that I need to spin so that I can ply the heel and toe sock yarn from the Institute this summer. But I decided that I needed to work on something else, so I brought out the Pipy this weekend and spun up some of the absolutely gorgeous Bunny and the Beast fiber that Fuzzarelly sent me too long ago to mention. I'd been spindling it up slowly, but I decided I really wanted to go for it, and a wheel was needed to get the job done. The fiber is a merino/silk/angora blend, and it is an absolute dream to spin. And the colors! Man alive, that batt had the most gorgeous colors in it, and in a two-ply yarn, I think they really came out. 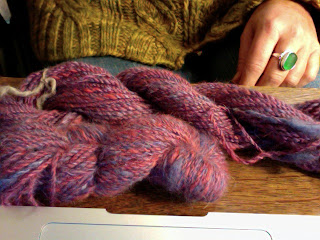 I'm sorry there aren't better pictures, but I realized that if I waited until I was home in daylight to take them, I wouldn't post until the weekend. I hope you can see the gorgeous raspberries and violets and deep purples in there, because they're incredibly rich. My mother-in-law saw the little skein that I'd already spun on a spindle (in front there) when she was visiting a bit ago, and made drool-y, admiring noises, so I told her (in a fit of inexplicable generosity - since when am I generous?) that this would be her birthday present. (Note, in the interests of full disclosure, I should mention that I have another batt, all in blues and greens and gold, stashed away where no-one can drool at it in front of me. Mine, mine, all mine...) So here it is, about 80 yards of heavy fingering weight loveliness (I haven't measured wpi yet). 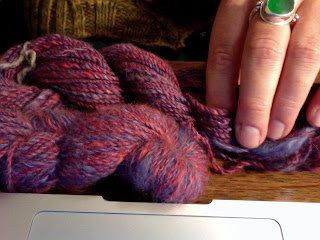 I think you might be able to see both the colors and the weight a bit more clearly there. I soaked it and hung it to dry, and I think I got the ply twist just about exactly right, as it hung straight and true after its bath. I'm quite happy with it, and I just hope that there's enough for my mother-in-law to do a little something fun and luxurious for herself with it.

In other news, I just got today a book that I preordered some time ago, and have been waiting for with much anticipation: The Culture of Knitting. I'm very excited about reading it, especially as I start to really dig into getting ready for the paper I'm presenting at the beginning of December. This book is definitely geared towards the textile side of things, which I know much less about than I do about the community side of things (which was what my questionnaire was geared towards), so it's going to be a fascinating read, although I imagine that I'll miss some nuances that a textile expert will catch (Stella, do you have your copy yet?). Today I also downloaded, for the first time, a pdf of the results to some of the questions from the questionnaires. Given that most of the questions now have between 2100 and 2400 responses, there is a lot of data to work through (we're talking between 65 and 75 pages in each printout). I still haven't closed the survey down, though, so if you know someone who's been wanting to take it, it's available.

I'm looking forward to getting away from politics a little bit more, and to spending some more time doing what I love to do: teaching, and thinking about this research project (plus a couple of others that have just been kicked off in my other field of research), and preparing to present some of that research to other folks in my field. (OK, I'm not sure I actually enjoy that last bit -- presentations give me the cold sweats -- but there is something to be said for actually saying some of these things out loud and getting feedback, so I understand the worth of the process.)

I've always avoided doing things with zips, just hate the thought of sewing them in. You've done a really neat job of it

Glad things are smoothing out a bit.

That spun yarn looks very pretty - it was very generous of you to promise it to someone else!

Thanks for the kind words!

Your aran turned out great!
I had a phonecall from hubby lastweek-he's in Houston,Texas working at the moment- he had to buy himself a longsleeved shirt because it was getting so COLD, with temperatures dropping down to 60-65F. We felt VERY sorry for him! After all, we had below 30F here in Norway...;-D

It's worth doing a good job on the zipper. Not like you're going to grow out of it anytime soon. (I say, thinking of the zipper I finally finally put in the kiddo's sweater. Not redoing. It's good enough.)

Plying singles evens things out. Time smooths out the rough. (such deep thoughts)

The zipper looks lovely, and I think you did a great job.

And I agree that spending less energy on politics is usually a good thing all around!

Your sweater is even more beautiful in person, and that zipper is professionally done. Congrats and whoa!.... am I jealous!

Zippers and buttonholes are a scourge but yes, that sounds like the right way to do it.

The book and your paper both sound pretty interesting! much better than work politics.

Lots of good stuff in this post. I'm glad you are seemingly feeling more centered.

I think I'm too sick to concentrate on reading the whole post but I definitely think that handspun is gorgeous.

Lovely yarn - glad things are settling down for you.

oooh the culture of knitting is in.. I must look out for my copy - another ocean to cross for a book to get here to me. And I can totally see why drooling was occurring - beautiful. The finished zip looks very very professional :-)
Stella

Missed you on Friday!!!

The zipper looks great! I've never put one into knitting before, but I know that they can be a right pain even in s stable fabric. Yay to you for figuring it out!

Why is drooling such a successful strategy? It's amazing how hard I have to fight myself to resist the "here, you can have it" urge whenever someone likes my knitted items. I practically have to clamp one hand over my mouth to keep from giving things away, even when they're my favorites. At least you have another batt! =)