That's what I appear to have done -- completely stalled out. I hauled the jacket in to work on Monday, to share with a friend there who's also a knitter. The nice thing about showing it to her was that it validated both my knowledge (and it is definitely knowledge) that it's just too big, and my sense that I just don't much like those big swathes of brown. She suggested that I try to sell this one and then buy more yarn to knit another, which would indeed solve the problem of my complete inability to make myself start the frogging process. (She also scared the heck out of me by wondering out loud whether frogging was going to ruin the yarn -- eek! I'm choosing to believe that it won't, but frogging sooner rather than later would probably help to ensure that.) But I just can't imagine asking someone to buy a jacket in a style and colors that they wouldn't choose, so that course is probably out. I've worked out how to include the brown without it being overwhelming, which is a good thing. Now it's sitting on the back of one of my knitting chairs, waiting for me to just suck it up and unweave that first end. I have this sneaking suspicion that it's probably one of those jobs that feels huge and overwhelming in the contemplation stage, but that turns out to be not nearly so bad once it's started. We'll see.

Meanwhile, I haven't been doing any knitting to speak of. I'm not sure how much of that comes from the fact that I feel like if I'm going to be playing with yarn, I really should be frogging that dratted jacket so I can start it again (note, btw, that I'm not dreading the reknitting, only the frogging), and how much of it comes from my general feeling of overwhelmedness these days. I had the sudden and semi-shocking realization the other day that I'm going to be out of town for five of the next six weekends. And the one weekend I'm home is soccer play-offs (all weekend). That was a pretty crazy thing to come to grips with. And in the meantime, I still need to finish up my classes, prepare the talk I'm giving in early December (the last of those trips, and the one for which I wanted, and still want, the Elektra jacket), write letters of rec, etc etc. And Rick's been out of town this week. So each evening, once I'm done with the usual evening stuff, I'm just beat, and all I want to do is to lie down in bed and reread some of my favorite novels (this is a long-standing coping mechanism of mine; if I reread a novel, I don't get nearly so caught up in it and I can put it down -- important when the rest of life is crazy -- and I don't have to put nearly so much mental effort into tracking what's going on; I get to visit with old friends instead, which is a very relaxing feeling when everything else is durm und strang, change and chaos). So that's what I've done. I think there's something to be said for honoring the need to hole up sometimes.

And in the end, that's what this long slide towards winter solstice is, right? A time to reflect, to start gathering up those stored energies for the wait until spring.

My knitting has gotten some use, though. Not only has it finally started to cool down (it was 45 degrees when I left the house this morning, which feels chilly to my unacclimated southern blood), but Younger Daughter had to give a school presentation this week on Edith Nesbitt (her choice). I figured surely Nesbitt wore warm woollen shawls as she sat writing her books, so Younger Daughter got to wear Dovecote for its inaugural trip out into the world. 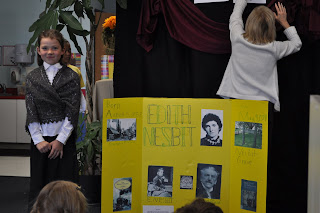 Since I was on furlough today, and since she asked me if I would, I got to come and see her give her presentation (memorized, three minutes long). She did very well, and only forgot one sentence. I don't usually do so well in my public presentations! 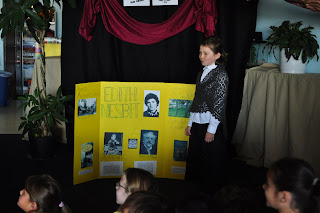 The looks on her face in both of those pictures are classic Younger Daughter (I think if you click, you can embiggen and see what I mean). Heh.

That's about it. We're off to Cincinnati this weekend, where more of my knitting will get a workout. I think that the Urban Aran will be the woolly warm thing of choice for the trip (it's only for the weekend, so I'm trying to keep the packing to a minimum). I have my travel knitting ready to go (a scarf, and Rick's socks, which should get finished soon), and my reading (The Knitter, and the IK holiday issue, not to mention Robert Jordan's latest book); I just need to decide whether I should bring one more skein of yarn and a sock pattern, just in case...
Posted by Knitting Linguist at 1:05 PM

She looks so sweet. What a nice island of calm in all your franticness. You couldn't just sort of leave the mitred thing on a bus or something, could you?

What a cutie she is!

Robert Jordan's latest is a chunk!

Put off the frogging and find something fun. In your "free" time.

She looks lovely and so elegant with the shawl!

I once tried the reread in my spare time idea with a book I brought back from a friend one Friday late at night,,, I found myself still reading around noon Saturday and it was the third time I read that book!

I think we should offer the ravley masters the idea of opening a section where we can offer knits like your elektra for sale. If you could put it therewith a good photo and measurements you may have the good luck of finding it a loving home :)

I understand your stall - and I think you capture the reason, too. Don't worry, this means the urge to get to something else will soon move your forward to frogging the jacket.

Your youngest suddenly looks exactly like you. I'm puzzled with myself - I've seen pictures of her before, and this time I nearly gasped at the likeness. Perhaps the shawl is the finishing touch? Regardless of what made this so clear to me, she is just lovely.

Like Twinsetellen I was astonished at how much YD looks like you. She looks so poised and confident.

Brilliant idea to try to sell it! You never know who might fall in love with it just as it is. Then you'd have a fresh start.

Oh my, I've never noticed how much she looks like you [don't tell her I said so - daughters sometimes don't like that sort of thing!]

Have a great weekend - I hope it's relaxing!

I think your suspicion is right that it will probably be easier than it sounds to unweave the ends and unravel the sweater. But that doesn't mean that you have to do it now! I've been known to leave things for a year, even, and they're still froggable. I usually find that giving myself permission to do something fun first immediately makes the hard project interesting again. And you should definitely be having fun...you're to busy to spend time dreading your "free" time!

Sweet - and a perfect debut for the shawl. She sure does look like you! I say, with everything you have going on, throw Electra aside, it will still be froggable no matter how long it sits. Knitting is supposed to be fun, right? Or donate it as a prize to something, a silent auction, a raffle.

After years of hearing that my DD looked like her very-absent father, she was delighted to hear that she looks like me! (but she's older)

Your younger DD - wow. Just wow. Not only is she adorable, but she does indeed look like you! (no surprise)

What a great project and three cheers for getting thru the 3 minute memorized material.

Have a wonderful trip. And I think you're right, and I've re-read novels, but never realized that's what I was doing until you put it so eloquently (as you always do)...! Frogging the jacket will come. All in good time.
(((hugs)))

Cast on for some socks! They'll make everything better....

Oooh, we love E. Nesbitt here! One of the great delights of having a reading child is that he is now recommending books to me. And I'm enjoying them. (Andrew Clements, the Fablehaven books.)

And sometimes - projects need a time out before they get frogged. So they can stew in their iniquity, or something.

She's so cute in the shawl! I agree that with twinsetellen that she looks like you. Wonderful that she did so well at the presentation too.

If you really can't frog it yourself you can always send it to me and I'll frog it for you and send it back. I don't mind frogging. While you are waiting to convince yourself to frog you really should take up something that good for traveling and work and meetings and meet-ups and etc that this next couple of months entails. Frogging a project wouldn't be good for any of those so you can put it out of your head that you should be doing frogging instead of knitting and get some good portable projects going.

Not that I particularly enjoy frogging hours and hours of work...but at my house it's a fun time for me and my six-year-old! She gets the job of pulling out the knitting and I wind the yarn into balls. It makes the ball winding go so much faster for me to have someone else doing the ripping, and she LOVES to do it for me! A fun time for all. :)

So far I haven't ruined any yarn by frogging; I've had some yarn not like to be frogged several times (it gets fuzzy), but I've heard from others that can be cured by washing the yarn and then weighting it down while it hangs drying. It doesn't bother me to knit with kinky yarn, but that's just me.

Besides....even though it sucks to rip out all those hours of work, you'll be able to knit yourself something you'll really love afterwards, right? (or you can go with what Carrie K said and put that sweater in time out while you knit something more fun!)

She's prepared, she looks the part and looks well-loved in that shawl, and she's deservedly proud of herself and it shows. Congratulations to both of you!

As for the frogging, come meet my friend Nancy. She will happily frog anything for me anytime, saying that when it's not your own mistakes ripping away, it's great fun.

Common problem. The anticipation is So Much Worse than the actual shot, even if it's two at the same time. I mean, the frogging! Not shots. Sorry. (I'm not sure you need to worry about the yarn holding up. Give it a soak when you're done. Won't help with threadbare yarn, but will take care of the kinks.)

The long slide into the solstice, but such a busy one!