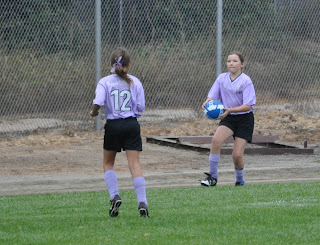 Thank you all for the winning wishes for the girls, and for the cheers. (I particularly liked the cheer: Run, feet, run! I used it all day on Saturday, so thank you.) We started our day on Saturday at 7:30 in the morning at Older Daughter's game, and ended it at 8:30 that night when Younger Daughter finally finished her last game and signed her teammates' jerseys. They both played hard, and we cheered hard, but neither of them made it to the semi-finals. It was a real disappointment to Older Daughter in particular, as she's worked hard this year, and gotten a lot better at her position. 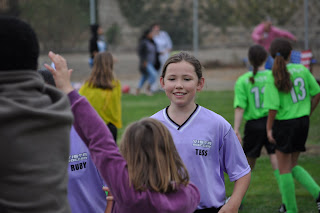 I think that Sunday morning, though (when at 8:30, we were at home in our jammies, Rick and I drinking coffee from real mugs and the girls making pancakes, instead of sitting on a cold soccer field), took some of the sting out of it. I was proud of them; they played hard, and they both learned a lot this season (and neither of them would ever think of playing like this; you should check out that footage if you get a chance -- anyone who says that women don't get physical or rough hasn't watched women's soccer). I actually think that both of them did some of their best playing in these last games, which is how a season should end. 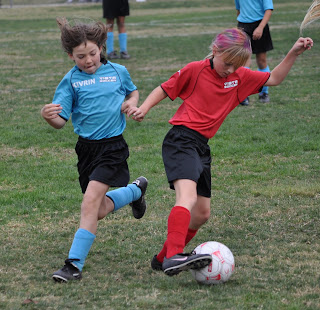 I knitted. A lot. It helps to keep me from turning into some kind of psycho mom, yelling at the ref (or the girls who get a bit free with the ol' elbows) from the sidelines. I have encountered a number of parents (and several coaches) who really ought to learn how to knit in order to work out some of their control issues in a more socially acceptable format. They yelled and hollered (and one parent almost got asked to leave the game), and one coach was so frustrated that he kicked a ball behind him in a fit of pique and nailed one of our team's players with it as she was sitting on the sideline (not our coach -- he was awesome); I finished the back of the new version of Elektra instead, which seems much more productive to me. 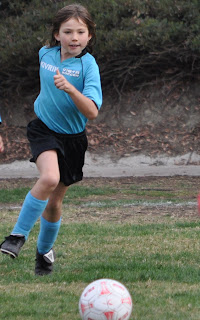 I reworked the colors (I don't have a picture for you right now, as it's night, and the colors just don't turn out well in the dark), and I am so much happier with them, I can't tell you. Now that the ripping is over, the reworking is making me very happy, which I suppose means that a) I did the right thing in ripping it out (as if we didn't all know that), b) that this yarn is absolutely fabulous, the colors and the way it feels are just about as happy as it gets, and c) that I am still feeling so overwhelmed with the rest of my life that knitting garter stitch continues to be a really good thing. I'm on my way with the first sleeve, I have a plan for the colors that I think will work with the amount of yarn I have left, and I have high hopes of finishing this reknit in a reasonable amount of time.

But tonight, I'm taking Older Daughter to her first real (e.g. not for kids) yoga class. She's been asking for ages, and now that soccer season is over, it seems like the right time both for her and for me. Given how much reworking of what my body knows about yoga I need to do to be able to practice again after the back surgery, she and I will both be perfectly placed in a yoga basics class.
Posted by Knitting Linguist at 6:05 PM

If you are reworking your body, does that mean you frogged it first? :-)

The action shots of the girls are so good I can wait a few days to see Elektra reincarnated. I hope your week has gotten off to a good start.

Oh, mother-daughter yoga -- how cool! I love yoga, but, alas, could never get my daughter interested.

You can only ask for the girls best, and it will be a good starting point for next season. Congratulations on the knitting, that seems to coming on really quickly, which is a very good sign

Hurrah for knitting [and for frogging].

Congratulations to both girls and their mom - sportsmanship is what it's all about after al.

Hope the girls are over their disappointment at not getting into semifinals. Sounds like they deserve congratulations for doing their best, though! (And Sunday morning pancakes sounds like a perfect way to feel better about being home!)

I've been toying with the idea of starting yoga again, but I'm not sure my back is ready yet. Sounds fun, though! Enjoy!

Glad elektra is going well! I am jealous of the yoga, I can't seem to find anywhere that the classes line up with my schedule properly. Have fun!

Sorry about not winning but it sounds like they had a ton of fun anyway. Mother/Daughter yoga sounds fun too. I've been thinking about taking up yoga. I'm just not sure I can convince myself to drive somewhere to do it. I usually just pull out my videos and work along to those (yoga, walking, pilates, whatever - I think we have belly dancing ones?)

A friend stopped by and her almost 2 year old showed me her 'dow dog' I should be so flexible.

I have sisters and went to a girl's school. No one can tell me a world run by women would be all nice all the time-- I always feel it does women a disservice to ignore our shadow.

Yoga basics is where I always head even when it's been years and years of practice. I don't want to push beyond that level. It suits me.
I HOPE older daughter had a fabulous time! And I, too, love the action shots of their soccer games.
I was not knitting when DD was in soccer. I learned NOT to go to the games, as my BP went skyhigh. Knitting would have been a good choice instead...
(((hugs)))

I love the photos of the young female athletes. They will grow up to be strong women.

Yay for doing your best! and then getting to hang out in your jammies. (Although yes, the semi-finals would've been nice too).

I'm happy to hear the new version of Elektra is behaving.

Great pictures! FYI, the other night I misspoke on yarn qty for babushka shawl pattern; you need 2 (not 3) skeins...Have a great weekend!

I sometimes wish I could frog and rework my body - back pain is teh suck!