So I've learned a new phrase during these Olympics: hat trick*. And, now that I know what it means, I think that I can safely say that as of Sunday night, I'd completed my very own hat trick. One sweater back, one sweater front, and one sleeve. Three goals in one game! (Right?) It helps to think of these things as small discrete finish lines, you know?

And I'm on my way to the fourth finish line. Once again, PhotoBooth to the rescue, since I knitted all of this last night after dark, but at least there's evidence of progress. I have realized that the color in my last PhotoBooth shot (in the last post) is probably the closest I've come to capturing what it really looks like. And Alwen is absolutely right: it looks like the bark of an oak tree, all browns and greens and gnarled and lovely. 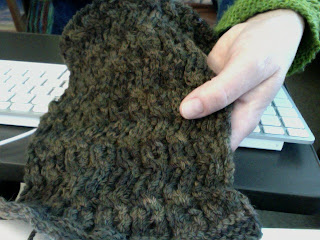 I'm about halfway through the increases for this sleeve, which means maybe a third of the way through the total knitting for the sleeve, since the rows get longer as I go. I cast on for this on Sunday night, as soon as I cast off for the first sleeve. If there's one thing I've learned from knitting, it's that it helps to get the starting bit over with right away. Once the set-up is done, it's much easier to be disciplined about picking things up to continue. I've been applying this lesson to my many work deadlines this month, as well, by making a point of getting the start to a new task done before I finish work for the day. It's somehow much easier to pick up the next day knowing that the first little bit's done. (This doesn't work with everything, but with some things it makes all the difference!) I've been doing that with socks for ages -- in fact, I don't cast off on a sock unless I have time to cast on for the second one -- and it's really helped with that SSS that haunts so many of us.

In any case, if I can finish this second sleeve by tomorrow night, then I can seam the sweater on Friday night, and take it along with me for all of the driving and dancing on Saturday morning to knit the collar and button bands. Since both of those are in garter stitch, that should be good travel knitting (which is why I'm pushing to seam at home on Friday; seaming is most definitely NOT good travel knitting!). If all of that holds together, I may actually nail this thing.

Chris is working away on her sweater, too. I got an email from her earlier saying that she was struggling with the first set-up row for Flyingdales. So I went and got my copy of the pattern, and dang, that has got to be THE most confusing set-up row I've ever seen in my entire life. I think if I tried to knit something like that right now, as tired as I am, I'd burst into tears and burn the book. This is why I admire Chris, though; she perseveres. And boy howdy, did she ever persevere on this one. Look! She not only made it through that set-up row in the end, but is now working her way up the body of the sweater. 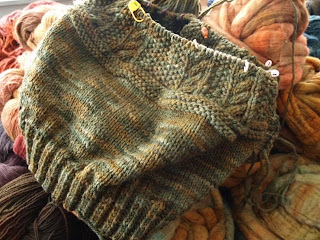 It's a gorgeous pattern, truly it is, it's just that every row involves partial repeats of pattern sections, melding into seed stitch, plus cables. Insanity. It looks good, though, doesn't it? And do you see what's behind that sweater? Roving. Yummy soft delectable gorgeous roving. Can you tell I'm missing my spinning wheels a little bit here in all this Knitting Olympics insanity? Heh.

So there it is, the latest Olympic update. Knit on!

* You can imagine that I needed to know where the heck the phrase "hat trick" came from, me being me and all, so I went searching. Wickipedia was singularly unhelpful in this regard. Oh, it gave all kinds of history of which sport first used the phrase "hat trick" and to which sporting feat it referred (for the record: in cricket, "when a bowler dismisses three batsmen with consecutive deliveries", that's a hat trick; I'm assuming that makes more sense to those of you from places with a cricket tradition -- I have tried and tried to understand cricket and haven't quite gotten there yet). But what it didn't tell me was, why "hat"? Why why why? So I finally went to my favorite source of all time (the OED, of course) and got this definition: "Cricket. The feat of a bowler who takes three wickets by three successive balls: orig. considered to entitle him to be presented by his club with a new hat or some equivalent" (first cited in 1886). Now the term has been extended to mean "a threefold feat in sports or other activities"; hence my very own hat trick.
Posted by Knitting Linguist at 9:11 AM

This is just why I so love your blog!
The knitting of course, but you are so wise, and so inquisitive in just the way I'd be if I allowed myself the time for it, so I end up learning wonderful things, vicariously, just by visiting your blog!
I'm loving your sweater, and proud of you for your Hat Trick! And Chris' is just scrumptious, too.

I am missing my wheel too, and can't wait to get back to it next week! I suppose I've accomplished a hat trick too, as I cast on for my second sleeve last night. Almost home!!!

I like your concept of beginning so that the task is not so daunting the next time you face it. I can imagine it works very well with socks. Right now I'm surrounded by piles of stuff I began sorting yesterday - my desk is looking better so it will (hoepfully) give me the push to keep going today!

Good luck with seaming on Friday so you can finish this weekend.

I inherited a two volume dictionary that goes into the origin of words and phrases. I've loved it from when I was a child, now my two go browsing through it from time to time.
Hope you reach your goal for Friday

Hats off to you in tracking that one down! Love love love that texture and total gnarlyness.

Minnesota hats off to you! (Usually parsed as "Minnesota, hats off to you", the U of MN fight song, but in this case we Minnesotans are doffing our hats...I'm sure you catch my drift.)

And I couldn't agree more about the value of getting something even a wee bit started to ease the continuation.

Sounds like you are right on target, go girl go!!!

hmm, I have only heard "a hat trick" used in hockey, and I was under the impression that fans tossed their hats and caps onto the ice to celebrate this. Is this a folk etymology?

Hurray for landing that hat trick! Now I know the etymology of hat trick :)

I'm spinning and spinning as I watch the Olympics. I made a hole in one--finished spinning the yarn for my daughter in law's birthday gift.

Got to say the OED didn't help me as much as I'd've liked. I have a hard time with cricket, football, and what the heck is that thing in soccer that keeps a goal from being a goal? I ought to know by now. I must be obstinate. (dead octopus?! ewwww)

I was just reading Chip and Dan Heath's Made to Stick and their new book, Switch, so I don't remember which this was in, but they called this giving out a punch card with two punches already on it.

I do that on long rows, too: rather than just doing half of the repeats, I'll do half and then give my future self a head start by doing another repeat or three.

That way they don't seem so long.

(Thanks for the shout out!)

Keep the hat-tricking up and we might have to make you an honourary Northerner. How might you be with skates, stick (hockey not knitting needles) and puck??

anyone who loves the OED is A#1 in my book - not just because i work for oxford university press. do you know that we have a wonderful blog, with a regular column i suspect you'd enjoy? find it here. i've posted a question about words and phrases (e.g., "Well I'll swan") and he responds in a post. it's pretty great!

Just now catching up with my blog reading. I so love the yarn and pattern for you new sweater.

Waiting for my new sock book to arrive; it should get here today. I have some yarn already wound into two balls.

I'm sure I have told you that I knit a pair of things, socks, sleeves, whathaveyou, simultaneously.

You are so right about setting up before putting something aside. I find I can jump right into things as long as I know where I'm going and where I left off, but if I don't leave myself that little gift it can take forever to get off the ground. Small increments are such wonderful things!