Well, I've managed to catch a cold. I'm pretty sure I know exactly where I got it, too (a well-meaning student who came to class sick as a dog so he wouldn't miss anything; I'm sure that was it, since half that class was hacking up a lung on Monday). But I figure if the Olympic athletes can compete with broken thumbs and knee surgeries and bad backs, I can knit through a cold.

With that can-do attitude, I finished the back of the henley last night. Does that count as getting through a quarter-final, maybe? I even cast on for the front and knitted through the edging so I could switch to the larger needles and knit the set-up rows for the stitch pattern, figuring that once I had the front that far, I'm back to mindlessness for a few repeats before the shaping starts. So I'm doing fairly well here. Of course, there's no point in showing you any pictures, since for all intents and purposes* it still looks exactly like the last set of pictures.

Luckily, Chris has saved us all from boring, photoless posts -- thanks, Chris! She sent me a picture of her gorgeous oevre-in-progress: 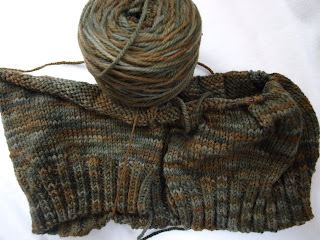 As of Monday, she was eight inches into the body -- go, Chris, go! And is that scrumptious**, or what? A reminder: This is the lovely Flyingdales, knitted in Chris' very own Abundance. I love those colors, and it seems like they're definitely in that granite-y theme, along with mine, no? 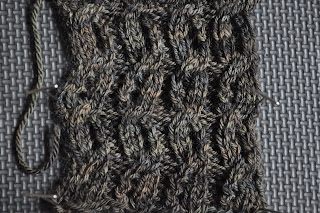 Power neutrals. That's what these are, I think: power neutrals. I'm already excited to wear mine -- it's better than a medal -- and it totally matched the outfit I was wearing yesterday.

Of course, knitting is more like one of the distance sports, rather than being like, say, the combined moguls, where those skiers go all out for 43.786 seconds, and then bam! It's over. Not with knitting. Knitters, like marathoners, have to think stamina; we have to plan, know that if we make it to this landmark by a certain time, and that landmark within the next bit of time, we might have a shot at the gold. Chris says, "I have wound up 8 big cakes and I have figured that I need to knit a cake every two days. One down! Sadly as of 4:00 pm (right now [on Monday]) I am not through half of a cake for today. mmmm...........???? YIKES???" All I can say is that I'm glad I'm not the only one who a) does these kinds of calculations on my way to the finish, and b) doesn't always make it to my goal for the day. (BTW, you can see those cakes of yarn, all wound up and ready to go, on Chris' Rav page; you can also leave a note there to cheer her on, since athletes all need a cheering squad.)

So, that's my update. One back done for me; eight inches of body done for her. We're on our way to the podium!

*Note: The latest iteration of this phrase in many of my students' papers is: for all intensive purposes. You've got to love language change in progress!
**OK, here's the cool thing I just noticed. A student of mine asked in class the other day about the fact that when most people say "warmth", they're actually pronouncing it with a "p" ("warmpth"). He's absolutely right, and it's because it makes the articulation of that awkward combination of sounds (m + th) easier. This student, being one of those students that I love who takes the initiative, then appeared in my office hours to tell me that he'd done more research and discovered that this process of insertion is called epenthesis; he's absolutely right (and beat me to it; we're covering that in class next week). But what's even cooler is that I just noticed that the "p" in "scrumptious" probably comes from the same process, but since there's no word "scrum" (at least not with a related meaning), as there is with "warm" to keep people on the p-less straight and narrow, "scrumptuous" gets to have its "p" in the spelling, while poor "warmth" doesn't. I vote we all spell it "warmpth" from now on; Truth in Spelling!
Posted by Knitting Linguist at 2:13 PM

Both sweaters look beautiful to me.

I love your warmpth story and it brought to my mind a word who a relative of ours pronounced with a p that is not in the spelling. I thought at the time that she did it because she learned English late in life mainly by hearing it. But now I can't remember what is that word for the life of me :)

And you know.. I have never pronounced warmth with a "p".. but you're right.. most people do!

a gold medal, for the heart-stopping courage of knitting through a cold. alert colbert! :)

Yay for progress! And you have plenty of hours left in the day at 4 pm (my knitting never even starts until 7 or 8 anymore). I love the colors!

Feel better! For all intensive purposes *snort giggle* I was SO shocked the first time I realized that wasn't right.

Right now Scott's pet peeve is all of THE sudden, it's rampant! ;-)

As it is Six Nations Rugby time at the moment, I will never look at the scrum in the same way, lol. My brother could never say his th's without inserting an F!
Enjoy the rest of the olympic knitting

Gorgeous yarn!!! And WARMPTH it is...

I remember the little thrill I got when I figured out the "ammonia" my sick cousin had started with pneu-. :)

reminds me of comptroller - but I like the phrase 'power neutrals!'

I have a little muscle tear in my shoulder, and watched those women in the downhill last night I felt like a big crybaby. Oh, I can lift my arm up to reach that, waaah.

If we were to have truth in spelling, I vote for an alphabet that covers every sound in English! Instead of "e", schwa would be the most common letter in the alphabet.

I taught pronunciation to intermediate level learners of English in 2008; it's amazing how many things we do every day and don't even notice!

Inspirational Story! Knit On, through the cold, etc

Funny thing: I always thought scrumptious meant something small and delightful or delicious and I find in my OED a somewhat different definition BUT I also found a definition for "scrumpy" from dialect "scrump" meaning small or undersized. At least I got the small part right!!

whoohoo! Go Jocelyn, Go Chris!
And, oh btw? which spelling of scrumptious are you going with?
;)
Feel better soon (but Bloglines only updated you between last night and this morning, b/c I cleared it completely yesterday late p.m. and you weren't there then!)
(((hugs)))

So interesting! I love language!

Yay Chris!!!! Yay Jocelyn!!!! Go team USA! hahaha. I am knitting away on my Sprossling. Back and left side done (but I started during the Olympic X Games. . . . I figured I was gonna count them as part of the experience hahaha). sorry about your cold. I'm getting over one too - it's the ratty kid.

Yes, you've gotten through the jostle of the start and are into the long middle of the race where you need to watch your pace and stamina. Make sure you fuel up and hydrate appropriately.

On language - just came across "tow the line" the other day and realized I'd always spelled it "toe the line". I think both could be used, but the meanings are certainly different.