I need to plan better

The last time I posted, I remember thinking to myself, "Dude, you should seriously save some of these project photos for the next time, when you'll have made no progress worth a darn. Then you'll have something to show off, all ready. Like a Tupperware of chili in the freezer."

Did I take my own advice? No, I did not.

I hope this makes anyone who's ever given me advice that I've ignored feel better; apparently, I do it to everyone, so you're in good company.

I have been knitting, though. Truly. I am almost done with the garter stitch section on Damson. And I am further along on the zigzag scarf (I don't like the name of that scarf in the book, so that's what I'm calling it). That has turned into excellent meeting knitting, and I took it with me up to Tehachapi for Sunday's language work, so progress is slow but steady. I have also been spinning. I am almost done with the first third of the roving I showed you last time. I decided to work on this one first: 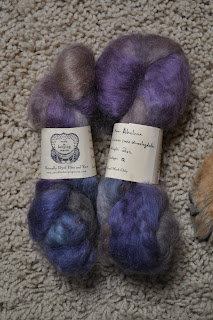 That is Wensleydale (in the Abalone colorway). Before buying it, I thought that was a cheese, but apparently it's also a sheep. (Related? I don't know, but now I'm going to have to find out.)(This will take some real research, because when I Wiki'd it, it only referred to the region. Nary a cheese nor a sheep in sight.) Kristine, from A Verb For Keeping Warm, recommended it highly when I told her that I was looking for fiber to spin into socks. And can I just tell you how much I'm absolutely loving this fiber? It is incredibly long-stapled, I'm guessing at least three inches, with almost no crimp, and it drafts like a dream. I'm putting in plenty of twist (which I find difficult, for some reason -- my hands want to product a loosely spun two-ply, somewhere between fingering and lace weight, and I'm trying here to produce a pretty fine singles, with very tight twist, so that I can end up with a tightly twisted fingering-weight three ply; we'll see how it goes), and it's taking it like a champ. I took the two hanks of fiber and broke each of them into thirds, keeping the colors in each third similar. We'll see how the final yarn turns out, but I'm having a lot of fun, and spinning each evening a little bit. I'm wondering whether it would be excessive to take my wheel along to Mammoth next week...

I also got myself a sock kit with which I am tremendously delighted. Check this out. How wonderful is that? I have a few modifications in mind, but mostly I'm going to knit them as they lie, and enjoy the completely over-the-top nature of those socks. So I need to wind that up and pack them to go on our trip.

Meanwhile, work continues. My field methods class is progressing beautifully. They were very brave, and over the last two weeks, four groups have worked together to elicit the Frog Story from our speaker. This sounds like an odd thing to do, but it's something that every linguist will recognize instantly. See, there's this book that Mercer Meyer illustrated years ago, called Frog, Where Are You. The entire book is pictures, no words, and the story is extremely active (it's about a little boy whose pet frog goes off hunting for some lovin', and the boy and his dog go out to find the frog and have many adventures before finding the frog with his lady frog and many froglets; the ending is happy, I promise). What this means from a linguist's perspective is that you can show this book to the speaker of another language, and ask them to narrate the story, in as much detail as you like, and you are guaranteed to get a story that is a) not influenced by translating from an English text, and b) has lots and lots of lovely verbs in it, because of all of the actions in the story. It's a staple of linguistic fieldwork. And that's exactly what happened here. Suddenly, all of the accusitive and genitive marking that I'd been waiting for in vain appeared out of nowhere, like mushrooms after a rain; we got verb tense marking up the wazoo, and a whole lot of other fun things, too.

It's also more fun for the students and for the speaker, I think, to be focusing on an actual narrative, rather than individual, unconnected sentences. But it is simultaneously hairier, in that you never know what's going to come at you from one sentence to the next. It's real language. We're lucky, in that we have an amazing speaker, who is both tremendously patient, and willing to work with the students as they analyze the sentences; in fact, I have to remind them not to rely on her too much, both because they need to do the work themselves, and because sometimes speakers either don't recognize some of the core phenomena of their languages (in fact, let's be honest, most speakers don't recognize most of the core phenomena of their languages), and sometimes what they've been taught about how language works is not, in fact, particularly accurate. In any case, my students all turned in their analyses of the story on Monday, and I've been having fun (honestly) reading them; with luck I'll have all of that done before we leave for spring break.
Posted by Knitting Linguist at 7:14 PM

Wensleydale is an region in North Yorkshire. The sheep that originate from this area are a longwool breed, usually black or grey. The cheese that takes the name is made from cow's milk and was made famous by Wallace and Gromit. Hope that helps

Miss 376 is spot on. The area is beautiful, the cheese is lovely!

I've only ever heard of the cheese (from W&G) but there are lots of breeds of sheep that Iahve never heard of! Merino is the most common one in Australia; for a long time Australia "rode on the (Merino) sheep's back". In other words, our economy was based on wool exports!

The colours in that fibre are gorgeous.

I love the work your field-class has been doing; I almost wish I was a student!

I went searching in a cheese shop for Wensleydale for 'the kids' after many viewings of Wallace and Gromit. So we were sitting around the table with crackers and cheese and they were all saying things like, "nice bit of Wensleydale, wot?" when a neighbor came in and thought I had a bunch of spoiled foodie grade schoolers around. Very funny.

Ah. W&G. I am unschooled in the subject, hence my stupefication over Wensleydale when I read this.
:)
(over the hill, I am)
I'm sooooo glad the class is working out! It sounds exciting.
(((hugs)))

The biggest difference between analyzing real language and a 'set up for us' practice language (even if it's in a real language) is the student's reaction, "What the heck is THAT? It's not in any of my books! The whole sentence is going into residue." WAYF? must have been a fun project!

I vote for taking the wheel with you! You won't be sorry...

Wensleydale cheese was (is) made from the milk of Wensleydale sheep. The Wensleydale Creamery had fallen on pretty hard times and was looking at closing when the cheese was mentioned in W&G. The mention spurred so much demand that it basically saved the business, cheese & all!

Love the language learning lessons. Also: Please! Wallace and Gromit videos for your young ladies! Such brilliant English humour. We saw The Curse of The Were-Rabbit in a UK theatre with our hard-core motorcyclist buddy and the whole audience (lots of adults, few children - it was the late show!) fell about laughing.

Mmmm, pretty fiber! Of course you should take your spinning wheel with you. If it fits.

Class sounds like fun! If the homework is a good read, then you did it right, I think.

I swear I am not making this up. When I read "I also got myself a sock kit with which I am tremendously delighted," I instantly thought Sanguine Gryphon. I didn't have the right kit, but really, they are all amazing.

Looks like you found plenty to talk about! I can never store up blog posts, either. And in the few cases that I try to, they never get written.

I love the colors in that fiber. I've never tried Wensleydale; I will have to keep that in mind as a fiber to try. It is funny how your hands have a favorite feel, isn't it? I'm trying to add a little less twist and spin a finer single right now, and it takes a lot of concentration not to fall back into old habits.

Class sounds like fun! You know it's a successful assignment when it's even fun to grade. =)

Oh, and those are definitely over-the-top socks, but look like a very fun knit.

And the cheese looks awesome, I'm planning a trip to the area this summer, and will have to make a point of sampling the local cheeses (yum!)

I am choosing to think you were talking about "Abalone" and not "Wensleydale" -- because it makes me snicker.