Where does the time go? I thought after last Thursday was over that I'd be able to finally start getting back into a regular routine. Up to and including a regular schedule of posting to the blog (not to mention reading everyone else's blogs; I think I'm doing a bit better with that than with posting to my own). It didn't seem to work out that way. We went away last weekend to Los Angeles to celebrate my mom's birthday with my folks, and I spent some time trying to catch up on some things at work, and I kept composing blog posts in my head about all of the other things that are going on in my life: this rally and how hopeful it made me, the hate speech incident that happened on campus and how unhopeful that made me, the horrific news about Chelsea King and all of the thoughts I've been having about the culture of fear and raising daughters and and and...

And I finally decided that if I wait to post until I have all of those thoughts in order, I'll never get there. I will post about some of those things, as they've been the impetus for a lot of rearranging of the mental furniture, but I want to get that house a bit more in order before the tour. So, instead, a few pictures from L.A. (from my phone, alas, I forgot the camera). And next time, a review of all of the knitting projects that I've started since completing my Olympic debut.

Oh, and I should also report that the teach-in and rally were, by the standards of our small campus, extremely successful. We had 500 people at the rally, all of them riled up in exactly the right kinds of ways. I really wish that radio stations like KPBS and newspaper outlets would realize that there's another CSU here in San Diego county, and that we're doing some interesting stuff, too, but that's one of those rants that can wait for another day. Meanwhile, a few pictures: 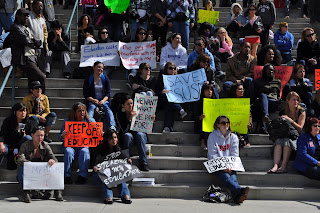 And one of my favorite signs: 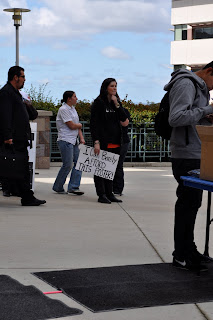 Students and faculty from our art department made black paper shadows to represent the 437 students who were qualified to come to our university last fall, but who couldn't be admitted due to lack of funding. It was a pretty visceral reminder of what we're losing when we don't have room for our young people in our institutions of learning. 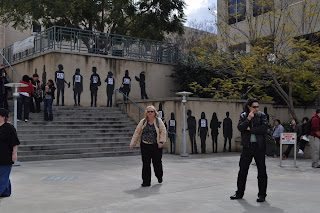 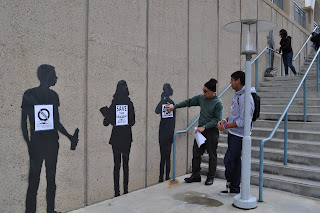 Our weekend in Los Angeles came as a truly wonderful escape from the chaos of the last month. We headed up on Friday (both girls had half-days, and I had a -- deliberately scheduled on this day -- furlough), and met up with my folks downtown before walking to an absolutely fabulous restaurant for mom's big birthday dinner. Dad had done his research and done it well, and the food was spectacularly good. Rick and dad indulged in raw oysters, and Older Daughter even bravely tried one herself. I don't think she'll do that again for a while (heh), but it's always good to be adventurous, right?

On Saturday, we headed to Pasadena, where we took the girls on a brief driving tour (in the pouring rain) of Occidental, where Rick and I both went to college (in fact, where we met), lo these many years ago. (In fact, we both came to the realization that we started dating there 21 years ago next month. Who knew?) Then we went to the Gamble House for a wonderful tour; both of the girls were very impressed, and Younger Daughter has spent a not-inconsiderable amount of time since talking about the design features of the house, and about how much she likes the aesthetic of showing the way that things are put together. Rick and I, both being huge fans of the Arts and Crafts movement, can't help but agree with her. After that, we headed to the Norton Simon Museum, where I spent many happy (and cheap) hours as a college student.

Then it was back to the hotel for a quick refresher before heading out to another absolutely fabulous meal at a Japanese place (can you say crab? mmm...), and then to a concert at Disney Hall. I don't think I can possibly convey adequately how utterly in awe I was of the acoustics in that hall. I have never heard anything so absolutely clear and precise and warm. The orchestra was, of course, excellent, and the hall took the music to another level entirely. It is also just lovely, full of warm woods and colors, and it was a pleasure to spend two hours sitting and listening to Prokofiev in those surroundings. But it was the music that made the experience so perfect; I'm already wondering how to get myself back up there to hear something else in that hall. Magnificent. Truly magnificent.

And then on Sunday, we went to the Griffith Observatory, to which I've never (if you can believe) been before, and went to my first planetarium show. I loved it. And not only is the observatory wonderful from a planetary physics perspective, the architecture is beautifully Art Deco. 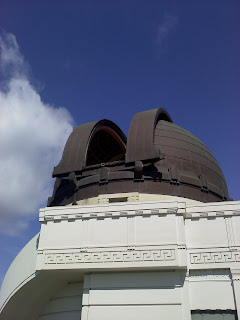 Rick and the kids chose planetary orbits for themselves. 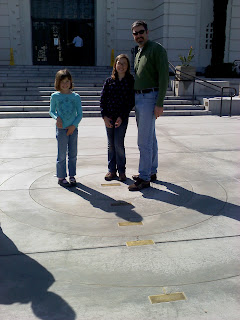 And the views of the snow-capped mountains were quite lovely. 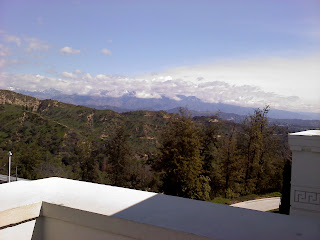 The girls were also charmed to pieces to actually see the Hollywood sign for the first time in their lives, and even more charmed when the movie we watched last night turned out to have a scene filmed on the very road that we drove up to Griffith. Their first experience of real-world/movie intersection.

And that's it for my travels. Next time, the four knitting projects upon which I am currently embarked. Meanwhile, we're off to a piano recital!
Posted by Knitting Linguist at 11:24 AM

Hey that camera phone takes darned good photos!
(thumb notwithstanding...)
:)
What a great time, and I have to say that the shadow students are terribly effective - at least to me, via photo, they are - they had to be better in person!
(((Hugs)))

It sounds like a wonderful, jam-packed weekend. Glad you all enjoyed it so much.

The shadow studetns were a great way to show the missing students - they work in a way words do not!

I've been back for 3 months, and I'm still trying to get back into the swing of things! Sometimes it just takes a while to get the mental furniture sorted.

The rally looks like a big success...500 is a lot of people to show up and care, especially for a small(er) school.

Wow this sounds like a fun trip. And super busy. Sucks about the kids that couldn't go to school. It really is amazing to see all "their" shapes like that.

Wow - for YD to be analyzing form and function so young - I'm thinking you may have an architect on your hands there. What a nice thought!

The phenomenon of writing blog posts in your head is well known to me. (Of course, I mean my head, not yours, sorry to be intrusive!) Does this enhance the experience, thinking about how one would describe it, or does it detract? It may make us more aware of things, or it could focus us on an abstraction rather than the reality we are in. I will have to ponder this a bit - I'd love to hear other's thoughts.

What a fun filled weekend.
I can remember when the going to a new theatre where all the internal construction was made of wood. Not only did it smell gorgeous, but the acoustics were fabulous. Makes a big difference to the enjoyment of music

Is it ok to have gamble house envy, and to love the protest shadows? I hope the shadows can stay as semi permanent reminders of those who can't be funded, well done. Sounds like a perfect family weekend, take care, Stella

What a great weekend. I do love arts and crafts movement myself, but haven't managed to move into one of those bungalows yet. the building i work in is an Art Deco masterpiece, it does make walking in to work more pleasant.

SOunds like a lovely weekend, and like you deserved it after all that you've had going on!

I think you're doing wonderfully well at keeping up, better than I am. I thought of you when I heard the news about King. And I thought about my daughters.

Your weekend sounds lovely. The Gamble House, ah yes, it's a marvelous place!

Sounds like you had a lovely time with our parents...Wish Mark & I could have been there but we are saving up for the big trip in June or July.

Will you be my mom? Just kidding, sort of.

Busy followed by Busy (but a good busy!)

I write posts in my head all the time, usually when I'm driving. Some of them get onto the blog, most of them probably don't.

The shadows are good. About a Bad Thing...