How is it Tuesday already? Tuesday of this week, I mean; it would make sense if it were Tuesday of last week.

And then, after watching Older Daughter's orchestra (and the choir, directed by the same amazing woman) take a prize in the festival, and after listening to both groups perform on Friday night, and perform really, really well (let's be honest here, a beginning string orchestra can sound like they're torturing small furry woodland creatures, but these guys have worked hard, and they were playing some fabulous music and playing it well, and the choir sang the most astonishing range of chorales, in Latin, even, plus Leonard Cohen), and after hearing the announcements of where some of the participating seniors are going to college next year (including Carnegie Mellon), the school announced that they're cancelling the middle school choir program, and shutting down orchestra altogether.

So the fight is on.

I really don't have the energy for this right now, but I also am not going to let this one go without trying my damnedest to change this decision. We'll see what happens in the next week or so, and whether all of the parents and students can rally enough support to convince the superintendent to basically give the director the one extra class she needs during the day in order to be able to afford to run the after school program more or less for free. I'm keeping my fingers crossed, but I'm also feeling very overwhelmed.

Meanwhile, I did have one lovely and relaxing day last week, when I met up with Anne and Kim and Beckie in La Jolla. 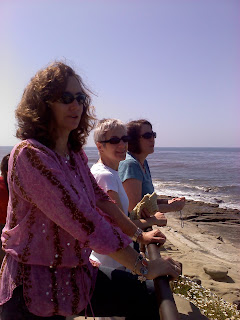 We had lunch at the wonderful Brockton Villa, looking out over the La Jolla Cove, where the seals lie in the sun (that's what those fuzzy brown slugs on the rocks are). 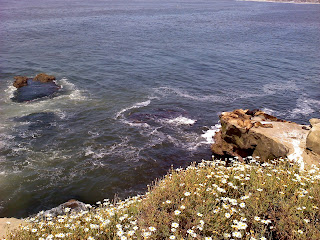 Then we went shopping at our favorite little jewelry store. The best part, though, was being with good friends, and laughing, and visiting, and watching the reactions of other tourists to Anne's impromptu sock modelling shoot, using the ever-willing Kim and her gorgeous legs (Beckie's gorgeous legs had been on display the day before; I missed it, but you can visit Anne's blog and see just how much fun that was, too).

Here's Kim, preparing herself for her modelling stint: 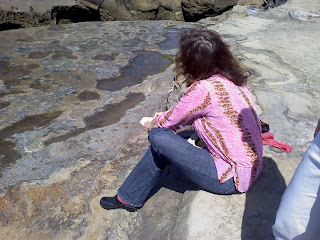 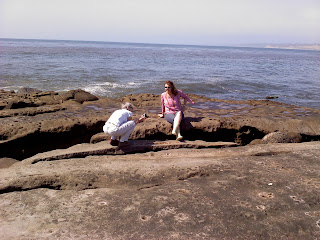 You can only imagine the looks we were getting. Beckie and I spent some of the time looking in the tidepools, where we found all kinds of goodies, including anemones, my favorite. No pictures, though; I'm always too busy looking to think of it. It was hard to leave at the end of the day, but I was consoled by the fact that I'll be seeing Anne and Beckie (and my lovely SIL!) at the Great Lakes Fiber Festival in less than two weeks.

In the meantime, I am knitting, I promise! I got about four inches into the first of a new pair of socks Rick while sitting through Younger Daughter's spring concert before discovering that they were too big (how does one make socks too big for a man with size 13 feet? I ask you), and having to rip back again. I think I've got them right now, and I worked on them again during Saturday's soccer game. I'm using Sanguine Gryphon Bugga in the most gorgeous shade of dark blue, and can I just tell you that this yarn seems to be all it's cracked up to be? I'm loving it. I'm also finished with the body of the Henley Redux, and am now working my way up the first sleeve. Once the sleeves are done, I just need to sew them in and put on the collar and button band and away I go. I have high hopes.

In the meantime, I'll just keep on trucking...
Posted by Knitting Linguist at 5:00 PM

Oh your day by the ocean is making me so jealous! I want to watch seals and look for things in tidepools!

I read Anne's post yesterday and was wondering when yours would follow. I am so jealous - next time I want to be there!

At least the Bugga makes ripping and reknitting more palatable.

But the orchestra/choir decision - not palatable. Did the football team also get cut???

Lovely day! You lucky ladies! LaJolla is a perfect destination. I suppose that if you had done your sock photo shoot in Ocean Beach, no one would have noticed :)

So sorry about the orchestra...they really should know better. It's worth the fight, even if it's one more thing on top of so many. Looks like a lovely day in the midst of it all, though...the ocean and friends are a good solution to overwhelm.

I wish I'd known about the Great Lakes festival...I would have planned to go!

Sometimes the decisions made by the powers that be are unfathomable, aren't they?

Glad you had a good day out to clear the mind.

one of your commenters made the point i was going to make, so i'll second it - i'll bet the sports programs didn't receive any cuts! i hope enough support comes together so the music program can stay alive. such short-sighted people.

Here's hoping things slow down a bit for you soon!!

I hope you don't lose that program, but I am also aware of the budget issues all over and know well that the first thing cut is usually the arts - I'm the sister of a former public school music teacher and my own child went thru these programs. I don't think they will EVER realize that arts education is every bit as important to students as math and science - in fact, it facilitates math and science learning...

Ok. Off my own soapbox. The day at the beach looks like a dreamy way to spend a day!
(((hugs)))

I got nothing to add about the school cuts. :(

And I'm not even jealous, because I am off to California tomorrow. Watch out seals and sea lions, here I come!

Good luck with keeping the music program. Goodness only knows how important that thing is for kids.

Your day at the shore looks gorgeous. I need to make it out to CA to see the ocean at some point.

Grad school is killing me, although with only 3 weeks left, I am having the occasional minute or two of optimism. But then I remember that I have a 5 page paper due in 2 days that I haven't started yet. And I should revise another section of my thesis. And maybe exercise at some point. And then I curl up in a ball and whimper.

Okay, so how funny is it that I learn about something called the Great Lakes Fiber festival from someone on the other side of the country from me, when I live about five miles from Lake Michigan?

The wonders of the internet.

Hoo, you sound busy. I'll leave my rant about cutting music and art for another time.

Wow, the kids did that well and the school is just chucking it? How about cutting the super's salary down closer to a teacher's to save money? (Ours makes an obscene amount.) Oh, good luck.

A day at La Jolla sounds like a good antidote to all that.

sounds like you managed a nice break away amidst the chaos of ending and performing. well done to both the girls .. and the knitters ... great photo shoot. I hope the fight for the choir goes well, they can't just let it go as their seniors leave .. after all seniors leave every year. take care - stella

All of my favorite places too. Not far from them, but never take enough time to visit. This has to change. Sorry about the orchestra cut. Such a shame.

I am so sorry to hear about the orchestra cut! Good luck in your fight on that front.

I played in my school orchestras from 4th grade onwards. I can't even articulate what an important part of my life that was. I hope something can be done to keep your daughter's orchestra program alive!