I really have been knitting through it all, and today I finally have a few FOs to show for it. Of course, I appear to keep casting on just as soon as I cast off, but that's the nature of the beast, right? So, some flower pictures, an update on this weekend's feis, and knitting are all on the agenda.

I thought I'd share a couple of pictures of what I see when I sit in my knitting chair on the back patio. The jacaranda is starting to lose its flowers, so it's all purple snow out there. 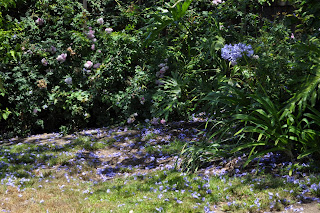 But there are still plenty on the tree. 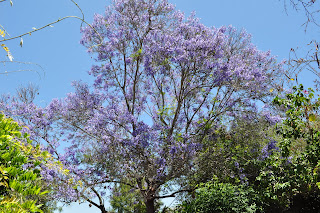 I can also see all the greenery from the shady corner of the house. 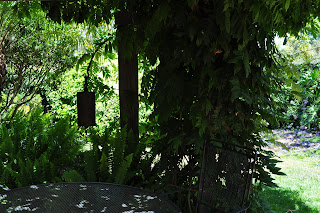 And here's the chair itself, tucked away in another shady corner (less shady since the wisteria was hacked back this year, but it's working hard to grow more shade quickly). 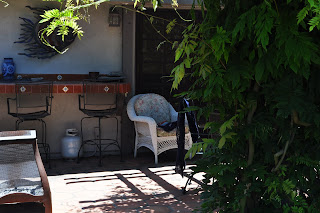 That's my favorite place to sit outside and knit, and that's where I got most of the last-minute knitting done on this, in time to wear it out to dinner for Rick's birthday on Friday night. 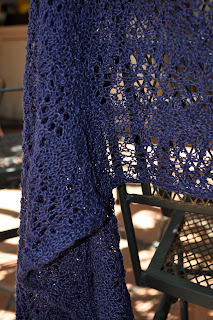 That's a pretty accurate representation of the color, actually. This is Lacey, from a Louet pattern booklet, knit up in Louet Euroflax sportweight. I used size seven needles, and three skeins of yarn. 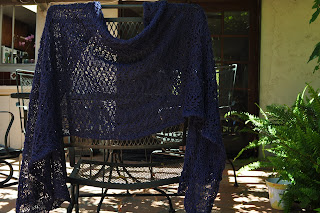 I have to admit that I really don't enjoy knitting with this yarn at all (hence the speed-knitting; this is all about product rather than process), but I love the results. I washed and dried it twice (gentle wash cycle, low heat dry), and it's now draping beautifully, completely unlike its original stiff self (like knitting with kitchen twine, really). I'll probably wash it another time just on general principles. Softened like this, the hand that linen develops with wear really shines through. 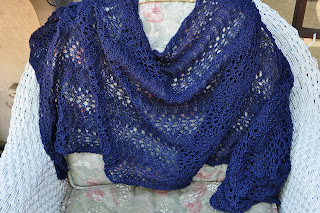 And I adore the color; next to purples, it looks purpley (for example, it really works over the henley redux, if you can believe), but near blues and denims, it appears more blue. Between the color (do I love denim, or do I love denim?), and the washable nature of linen (no blocking needed), it will be a workhorse of a piece. I can tell I'll be using it a LOT over the summer.

The other project I finished was smaller and easy. I knitted myself a pair of the Turkish Bed Socks that I made for Older Daughter, out of the same yarn. My pictures of the socks on my feet are glitchy for some reason, but they're perfect in clogs, which is exactly why I knitted a pair for myself. I have a lot of skein ends from socks I've knitted for myself (I have small feet) that would be just enough yarn for more of these. 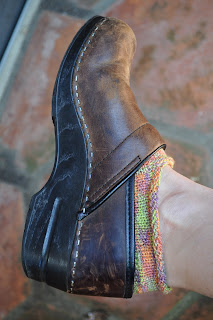 (Excuse the clogs; those are my oldest and most beat-up pair, but you can't beat Danskos -- I've been wearing these constantly for more than nine years now.) These went quickly once I buckled down and worked on them. They're knitted out of Sockotta (Plymouth), on size two dpns. The construction on these is fun, and keeps them from being boring, without being weird and overthought.

Last but not least, Younger Daughter had a very good day at Sunday's feis.

She's been practicing madly for months now (since our last abortive attempt to go to a feis, which ended when she got the stomach flu in the middle of the night before), and it really paid off. 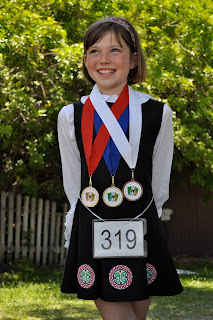 She clanked when she walked. Heh.
Posted by Knitting Linguist at 1:20 PM

I admire your perseverance with the wrap - if Im knitting with a yarn that doesn't feel nice I have a heck of a time working on it - it doesn't matter how much I know it will soften up after washing. Obviously your stick-it-outness paid off - it's lovely

Flax yarn is rough to spin, to knit, to weave, to crochet, and to fondle. Until laundering. I have a huge cone of lace weight linen 2-ply that I have been eyeing - I am feeling better!

It's too hot and buggy to sit outside and knit here in southern Indiana. Hard to do any yarn work when one's hands are sweaty.

The lace is beautiful! I love shade-shifting colors that will go with anything.

I envy you your knitting seat; I have none quite so peaceful-looking; one season worth of potted plants isn't quite the same as a Jacaranda tree and Wisteria.

Congratulations to YD! Great that all that work paid off. =)

What a pretty place to sit and knit! I love the wrap. Flax isn't my favorite to work with, either, but it results in such a lovely end product.

Many congratulations to YD! What fun to come home with one of each color!

And linen - yes, so nice to wear, so stiff to knit. I wonder if one could braid a skein up nicely and wash it a couple of times (or just put it out on the concrete driveway and beat it with a baseball bat for awhile) before knitting. Hmm, may have to try that next time.

The wrap is gorgeous and I'm glad you got it finished in time. Lovely colour.

Your knits look nice, I especially like the blue/purple wrap although I am not sure I would have finished it if I disliked knitting the yarn.

Wow! Congratulations to Youngest Dtr! Clanking is good, and the smile is Huge!

Oh, I'm with you on that Euroflax. I knit a sleeveless top with it a year ago and it's so nasty to knit with, but washes up really soft and wonderful. . . . Love the last picture of your dancer!

Well done to Youngest Daughter, she looks so happy.
The wrap is a beautiful colour. I love it when it seems to change depending on what you wear it with, and that looks a relaxing place to knit

as gorgeous as that shawl is, it pales next to your daughter's smile! she kind of has your smile, doesn't she?

Your daughter looks so happy and I love the girls without the goofy fake curls. I've thought about prewashing linen to make it nicer to knit with, but haven't tried it yet. What do you think?

Congratulations to your daughter! Impressive!

Even with your unenthusiastic attitude toward knitting with linen, I still want to try it. Is it worth the effort? From the looks of that beautiful wrap, I think so! Maybe that will be my next summer project.

Bursting with pride, and rightly so! Congrats Younger Daughter!!!

And so now two thoughts: Your linen lace is so scrumptious that I must now force myself to knit up the Euroflax I have into lace (I have 2 shawls worth) and I'm delighted to see your Danskos - that proves my suspicion that I'll be wearing mine for a long time (and they're well worth the price!)
(((((hugs)))))

Haven't knit with linen yet but I give hemp a good soaking in the skein before using and it makes a big difference in the hand. I wonder if linen being a bast fibre the same thing would happen?

Congrats to her, she looks adorable with all those medals on!

The shawl is lovely, I can definitely see that being a practical summer piece!

Congratulations to your daughter!

I bought some Euroflax oh, about a dozen years ago. It taunts me and I threaten to make it into worn-out dish towels, so there. Now I'm really in for it, if it sees your shawl.

And way to go to you for finishing the wrap and knocking out the footies (as we called them when we were younger)!

Beautiful shawl! And comfy socks. Your youngest looks very pleased and well she should be! I'd love to see video of her dancing.

I was looking up knit socks and I came across your web page. I have a few pairs of Dansko clog's myself. One of which is ten years old and looks just like your clog. It just has character. I find them to be comfortable. I did get them resoled once at a cobbler. I've never worn my clogs with socks. A few months ago I found pictures of sock's to be darned worn with clogs. I darned a pair that just peeped out just above the to of the clog. I wore rolled denim jean with them like I usually do to show the ankle. I received nice comments from two people about the socks and the look. Also, the socks felt plush.