I'm leaving tomorrow for a week, so I thought I'd better do a quick wrap-up of the rest of my adventures at the Great Lakes Fiber Festival. Due to the return of the June gloom (which is now lasting into July), I still have no pictures of my yarn acquisitions (nor, come to think of it, of my fiber acquisitions, which were few but lovely), but I do have a picture of something that I managed to not acquire, in spite of the best efforts of their owner: 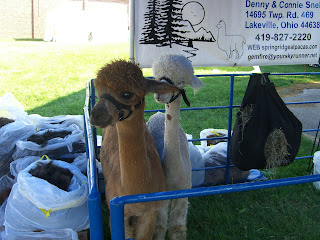 Aren't they lovely? There were a number of alpacas at the festival, all of them just gorgeous, with their huge friendly eyes and their soft soft fiber. (Did you know that they really do hum to one another?) The gentleman who owned these two was very friendly, and had his sales pitch down flat. He talked about the fact that they're cheaper to feed than dogs (and got dog food prices from my SIL to prove it), the fact that they'll keep a lawn trimmed and leave deposits of fertilizer to boot (a very classy way to put it, if you ask me), and the fact that since they have padded feet (like a dog's), they won't ruin a hardwood floor (this rather begs the question, no?).

It was tempting. I can imagine the girls walking their alpaca through the neighborhood, just like this: 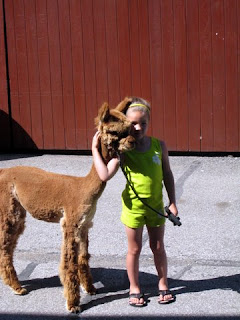 But I refrained. I also refrained from coming home with an angora rabbit, knowing that taking care of these beauties is a not-insignificant task. 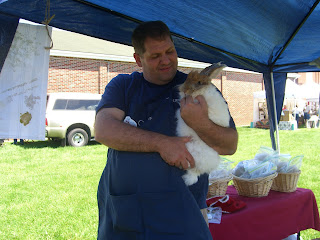 They surely are soft, though!

I did, however, jump one really important and, for me, somewhat frightening hurdle. I did my first-ever interview for the knitting project. Chris (wonderful, kind, and patient Chris) volunteered to be my guinea pig. While I know intellectually that a) she is wonderful and my friend and is unlikely to laugh at me, and b) knitters in general are wonderful, and c) that I've survived far worse than conducting a formal interview, it is still always hard to do something for the first time, and there is a weirdness to sitting down with a friend and turning on a digital recorder. When I finally admitted to Chris how nervous I was, she confided that she was, too, and we agreed that we could bravely try out this new thing together. And it was fine! I don't know if she had as much fun as I did, but it was a wonderful way to start the next stage of the process, and I can't tell you how much I appreciate her patience with my missteps (like forgetting that I'd need to plug my recorder in OR have batteries; I did have some stashed in the car so it wasn't irretrievable, but still -- learning experience), as well as her amazing generosity and trust in sharing her time and story with me. Thank you, Chris!!

So in the end, that trip felt like a real success on lots of levels. Time with my SIL, rare and wonderful, seeing old friends and new, conducting my first interview and buying a first fleece, and learning long-draw (which I'm working on!). Very nice.

Tomorrow, we're off to Washington, D.C. for a little while. We'll have four days there before taking the girls to my in-laws, where they'll stay to visit for another week while we come home. We get to see my brother and his husband, which is wonderful; I haven't gotten to visit them at their home yet, and I'm really looking forward to it. My brother has also arranged for us to tour the White House, which we are all tremendously excited about (the girls keep saying things like, wouldn't it be amazing if we saw the President? I'm trying to talk them down so they're not too disappointed when they don't get to hang out with the Obama girls). This is our family vacation for the summer, and we're going to make the most of it.

I've also packed my knitting. I finished the bamboo socks, as well as the shawlet. I turned out not to have enough yarn to really complete the pattern (sigh), and there's no more to be had at my LYS (double sigh), so I sort of winged something, and I'll need to block it to see if it actually worked. I'll let you know once that's done. If not, I'll frog it and try something else. But the socks fit beautifully! Too bad it's 100 degrees in D.C. where I will not be wearing socks. So with those off the needles, I have packed yarn to knit a pair of socks for Younger Daughter (inspired by Lori, I think I'm going to try these babies), as well as what I need to knit two more of the beaded tams that I love (one for each daughter). All of those are pretty good travel projects (barring the beading part of the tams, but that is only over nine rows, which go pretty quickly). I'll also tuck Bex in for the ride; they're much more complicated than those other projects (an understatement), but good for knitting while listening to an audiobook on the plane.

I may be able to post when I'm there, but the camera kit hasn't arrived for the iPad yet, which means no pictures (and I had such high hopes), unless I can think of a way to get them from my phone to Rick's, whence he can email them to me. I haven't yet figured out how to get a picture from email to save on the iPad, though, so that may be a moot idea. We'll see.

Meanwhile, perhaps I need to research the location of yarn stores near Dupont Circle and the Mall, eh? Any suggestions?
Posted by Knitting Linguist at 4:27 PM

The only LYS actually in the District is in Eastern Market. (Hmm, can't actually remember what it's called.) There's a GREAT shop in Wheaton, MD called The Yarn Spot (on the red line) and two in Alexandria (on the blue line). Please don't ride the Metro at rush hour, we don't like it when tourists get in our way :-)

I live near Dupont. Enjoy your visit here!

Those little alpacas (alpaci?) would have been a serious temptation. And I already know I can never have livestock because they'd all be named and housebroken and living in here with us in about two weeks time.

Have a great vacation! I'm afraid if I were going I'd want to play with the Obama girls, too. Or at least have some girl talk with their Mom. :-)

I heard alpacas make wonderful pets though I can't tell you where,,, (probably some alpaca farm!)

Have a great vacation.

Hanging out with the Obamas sound like a nice idea to me too :)

So the alpaca have padded feet, but wouldn't the fertilizer be an issue for a hardwood floor?

I hope Jan comments on some local yarn stores - keep your eye out for her if you get near the Pentagon. Of course, I'm not even sure if she is in town this week.

Don't miss the Roosevelt Memorial - a series of parks along the basin. W & I found it to be very touching.

We have an alpaca farm in our village. When we first moved here, the boys were fascinated with them, now the dog isn't quite sure what to make of them.
Have a great holiday

When Obama won the election, we started planning a trip to DC. I have a friend who was being considered for a job in the west wing at the time (he didn't end up taking it - which I found Shocking!!!) and we had lots of fun talking about taking a tour. But the most fun was hearing my girls, who are almost the same ages as Malia and Sasha, ask if they could go play with them at the White House. (= It was a nice thought. Hope you see the President while you're there! Hey, it could happen!

have a wonderful time! it sounds like a great family vacation. i can't wait to see your circle socks; i hope you enjoy knitting them as much as i am enjoying making mine. fingers crossed for an obama sighting. :)

and p.s. when my husband and i were in peru, we stopped on the side of the highway to take photos of an alpaca herd crossing the road. a peruvian woman standing near us said "aren't they cute? and so delicious." it was startling and hilarious.

I'd have a hard time not taking those lovely creatures home too - but I don't think "but he followed me home!" works as well with an alapca as it does with a stray cat.

There was one around Dupont Circle, but it sounds like not anymore. Wave hi to my hometown for me! I'm from a corner of Bethesda out past the Beltway. I miss it.

I just googled http://www.festival.si.edu/visitor/general.aspx but it ended yesterday. We used to go downtown every year to see that.

Alpacas hum? What do they hum? Show tunes? have a lovely time in Washington.

I'm thinking of staying in my office overnight just so I won't have to go outside.

There used to be one near DuPont Circle that closed. There must be one somewhere accessible. I took the metro to one in MD but it wasn't very big. And maybe the Obama girls would like a visit!

Have a fabulous time!

(and yes I can see the girls walking an alpaca, but I'm not sure I can see you divorced...and I suspect Rick might just put HIS foot down on the hardwoods?)

That is admirable restraint, given the alpaca-for-a-walk picture. They are such cute and funny-looking creatures!

Have a wonderful vacation!

I can only hope it cools off some for you. But it will be so much fun anyway! And you have enough knitting, probably. On the other hand, you could always sneak in one more just in case.

Drats - not quite enough yarn for the little shawl. Hope the fix worked.

Have fun in DC! I love it there. No clue about the yarn stores, I'm always too tired after sightseeing and there's always something else I have to see....

Yay for braving New Things and doing the interview for the Knitting Project!

Those alpacas are cute - my DD wants one!