I have survived the first week of classes. That's always a good sign, since it means that it's time to start settling down into a routine for the next twelve or thirteen weeks, until the chaos of Thanksgiving and finals comes around. I'm still finding my feet with all of the schedule changes, though. This is the downside to being a teacher and having kids in school at the same time: all of us have everything shift around at the same time at the beginning of the school year. Everything from class times, to soccer practice, to dance practice move right about now, and I spend the first several weeks of September obsessively checking my calendar, sure that I've forgotten something crucial (mostly because it has been known to happen).

But I did mean to share at least some pictures from our trip up to the Bay Area for Grandmom's memorial. Her actual memorial service was beautiful, a completely fitting tribute to her life. I think that it was harder to get through, for me, than it might have been right after she passed away; at that point my sense of her readiness was vivid, and while "happy" isn't the right word, maybe some of you know that feeling of vicarious relief for someone who was really OK with having reached the end of a long and good life. By now, though, I've had time to remember how much I miss her, and how much I'm going to miss her, and hearing people talk about the person she was, in the years before the end stages of her life, just reminded me more vividly of how much I enjoyed her company and valued her friendship.

The other good thing about the trip, though, was the gathering of family. The girls got to spend more time with their cousin, whom they absolutely adore, and we got to spend time with lots of people, but especially Rick's brother and sister-in-law, whose company we really enjoy, and which we don't get enough of. We dragged them to the UC Berkeley Botanical Gardens, where the girls grabbed their own maps, and requested that we not follow too closely behind them. 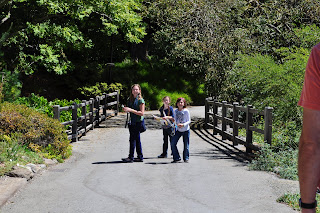 So we wandered around on our own, taking in the sights. 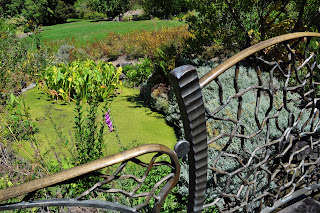 Some of which were rather unexpected. 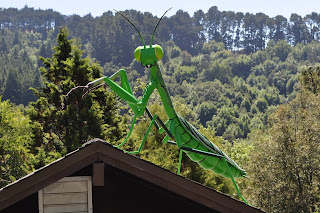 We got to chat a while, and visit. 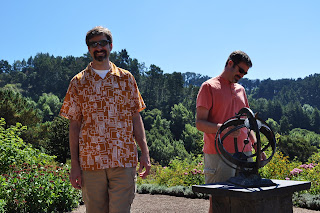 We saw trees that didn't seem like they should be thriving quite so well as they were. 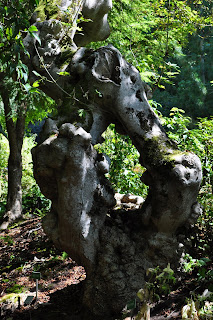 Plants that were aptly named, like this spiral aloe. 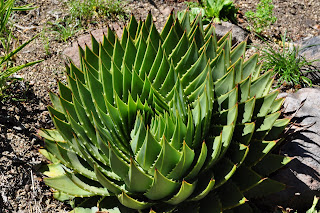 And plants whose names didn't seem to fit them quite so well. 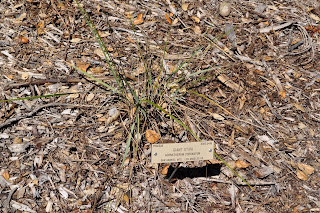 (That little sign says "Giant Stipa", in case you can't read it.)

The girls kept playing with their maps. 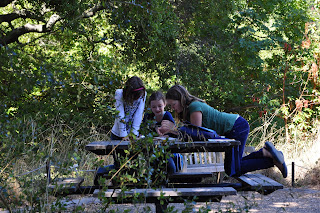 Until we hauled them off to see the little amphitheater in the redwood grove where we were married. 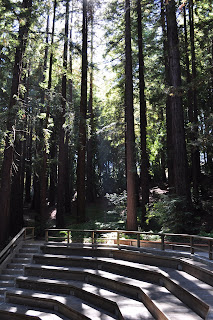 Lest you think that I've completely lost the thread (pun intended) with this supposed knitting blog, my sister-in-law and I did, in fact, manage to visit two yarn stores while we were there (and can I just tell you how much fun it is to have a partner in crime on these trips? even if she is a terrible enabler...). We went to Stash, where we spent a lovely time browsing before deciding on our yarn. You should see the stunning coppery silk laceweight that my sister-in-law bought -- there was no way I could have let her walk out without it. And I decided that it was time to try some Noro sock yarn, which I'm working up into plain meeting socks (as in, socks that I can knit without thinking about them, during meetings). 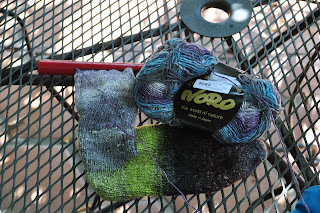 I'm not quite sure I'm 100% convinced about the whole Noro thing, but more on that another time. Then, when we were in the City, I mentioned something to Rick about having heard there was a fabulous yarn store that was really worth a trip, and he, lovely enabler that he is, promptly hauled out his phone and found it for us. He even got us directions. So off we went to Imagiknit, about which all I can say is, boy howdy. We were a little overwhelmed. 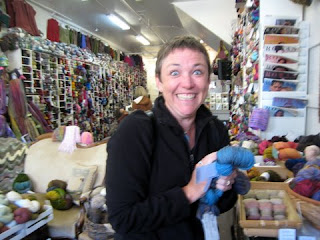 In a sort of hysteric kind of way. There were two rooms chock full of yarn. Perhaps more amazingly, when we both looked to match a skein we'd found so we could get more of something, the folks who worked there would calmly say things like, "Well, it looks like we have 30 more of that colorway in the stock room" (!!), and then they'd go and get more. Unreal.

I managed to walk away with (only) three skeins of Malabrigo sock yarn for a sweater. I adore this colorway. Love it. It's the first yarn I picked up when I walked in (you can see it in that picture up there), and after looking at yarn for an hour, I was still clutching it to my chest and refusing to put it down. That seemed like a sign. 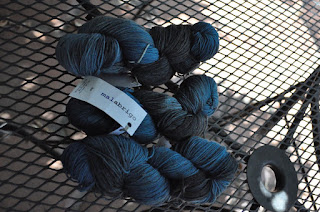 I'll work on getting a better picture, because the blues are more robin's-eggy, like in the picture up above. I'm thinking this will be the perfect yarn for Anne's latest henley, no?

So there you have it. There was also a trip to Muir Woods in there, and a walk across some of the Golden Gate (of which I have no pictures, but I'm sure someone does). Lots of good food. Lots of good company.

This past weekend has been a busy one, too, with two birthday parties, a feis, and a bat mitzvah so far. But today there is nothing scheduled for me except a date with the washing machine and my spinning wheel. Just what the doctor ordered, I think.
Posted by Knitting Linguist at 11:16 AM

Seems that the Berkeley gardens were a pretty good spot for independence. But really, shouldn't Rick have kept a better eye on you in those yarn stores? He got away with some fairly irresponsible partnering, in my opinion, even though it seems you were quite well-behaved.

And that colorway? Kind of reminds me of some of Chris's, so no surprise that you loved it so.

The strength of your response at the memorial tells me you will keep part of your grandmom with you forever. She'll bring you comfort and joy at times unexpected.

I don't know which picture startled and made me laugh more: the praying mantis, or you in that yarn store!! At the end, of course, I like the photo of you more. I know that feeling. :)

What an absolutely gorgeous spot to hold a marriage ceremony. Wow.

I can easily imagine what you describe about the memorial service being more overwhelming. I hope it transforms into something that's more comforting than sorrowful.

I am also not a Noro fan. I've tried a few of their yarns, and I can get the same kind of color movement in much nicer yarns, so I don't spend the money on it anymore.

As for the yarn stores, they sound wonderful. I need to get out to CA to visit them.

The girls looked like they were having a ball in the park, which was nice to see.

As for you Grandmom, I feel the same way about my Grandpa. He died at 98 years old almost 10 years ago now, but I still miss him. He was also ready to go when he died, but there's no one else quite like him, and there's all kinds of things I wish I'd asked him when I still could.

I LOVE the picture of you and your yarn. If my face hasn't shown it, I know I have felt that way about many a yarn skein!

I have to laugh at you saying your sis-in-law is a great enabler when it was YOU who wouldn't let her leave without the copper yarn?
lolol
I now have to go to that yarn shop - just your face is enough to tell me: "MUST.GO.SOON!"
(LOVE the praying mantis)
And we've talked about your grandmom...are the hardest to lose are missed the longest...
(((((hugs)))))

Is the colorway of your Malabrigo sock Persia? if yes, it is the one I used in my Dayhbreak and you adored the first time I showed it :)

About the Noro sock, it improves with washing and wearing quite a lot. Add some hair conditioner to the water when you wash it.

I love your photo in the yarn shop and your wedding ceremony spot.

You must visit Romni when you come to Toronto.

I'm not usually what you could call a spiritual person (you guessed that?) but I do find gardens very helpful places to be when dealing with loss. I'm glad you had that bit of restoration after the memorial service, especially as you're going to be too busy to think about anything other than what's in front of you for the next few weeks :)

Yay for surviving the first week! It's all downhill from here (in the best possible way, of course).

The Malabrigo is clearly a yarn you needed to have. It will be gorgeous no matter what you do with it.

I think you're right that some losses gt worse, not better with time. In the moment, you're a little more ready to deal with it than later when it pops back up into the day-to-day. Still, it sounds like it was a beautiful service, and it's never bad to spend time with family.

That praying mantis is too cool - and I love the yarn you picked up!

Yup. I keep reminding myself my grandmother was probably ready to go for at least a year if not two... And I selfishly wish I'd known her better as other than My Grandmother, even knowing her well into my own adultness.

Beautiful yarn, and I adore your "Happy Yarn Shopper" picture. The praying mantis made me laugh out loud, as did the itty bitty "Giant" thing.

I understand how hard it was to get through the memorial. I think, even when it's expected, the shock of someone's passing kind of insulates us for a while, then slowly fades as we get used to the idea that they're gone. To have to relive it in such a formal way without that "shield" is painful. It helps to remember they're always with us. :-)

The UC Bot Gardens are a little more flowering than when we went! (in the dead of winter). Gorgeous.

Your Grandmother's memorial service sounds wonderful. It's sad for those of us left behind, good memories and ready notwithstanding. Maybe I'm just selfish to the core.

I love that gleeful picture of you in Imagiknit!

A wonderful trip AND yarn, win-win all the way around.

I think sometimes after we lose people we mourn different stages of their lives. I know my grandmother was ready to go when she did and it was hard to see, but she was in so much pain that it was okay when it happened, but later I started missing her from 10+ years ago. The grandmother who would shop with me and sit and talk for hours and help me pick out yarn for projects and so on. She seems like such a different person than the person who was there at the end. I didn't miss the younger her while the older her was still here to love, but now that she's gone I feel the loss of the younger her more strongly. Grief is strange and different for everyone, we just have to ride the rollercoaster and enjoy the memories it brings.

Ooo! A lovely time was had by all!

I know what you mean about it being harder! 16th January was the first anniversary of my dad's death and I am way more teary now than I was twelve months ago!