Out of the mouths of babes

I had occasion to have dinner the other night alone with Younger Daughter while Rick and Older Daughter were at soccer practice. As we discussed our plans for the rest of the evening, I mentioned that I was going to finish plying the batt I'd started spinning. She commented, apropos of nothing that I seem to have a lot of yarn, to which I replied that yes, I did have some yarn stashed away. She then asked, "But Mama, what are you going to do with all of that yarn when you can't knit anymore?" As if such a thing were imminent. I said, "Why wouldn't I knit anymore?", and she said, "You know, when you get old." Again, as if such a thing were imminent.

Hmmm... I thought about it for a moment, and then pointed out to her that I'd only been really knitting for about six or seven years, and that I could easily knit another thirty years, and still not be as old as Memere is now. (Sorry, mom, but I think you'll see where I'm going with this in a moment.) She looked utterly enlightened, and not a little surprised, because it's pretty clear that her Memere still has plenty of life left in her, even at thirty years older than her aged mother. Memere could probably even summon up the energy to knit! It occurs to me that, from her perspective, Mom and I are both just Older, and Adults, and probably more alike to her in our adulthood relative to her feeling of non-adulthood than we are different from one another because of our ages. Maybe kids just don't see generations like we do. In any case, she seemed reassured that I wasn't going to fall by the knitterly wayside with a roomful of yarn left unknit.

Especially not this yarn. 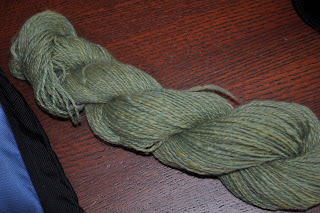 Isn't it lovely? That's the angora/pollworth batt that I mentioned last time. This is a pretty close representation of its actual color, which is "pesto". I love it truly, madly, deeply. 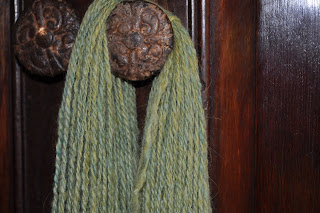 This, plus more, is destined to become a pair of hats for my mother and me. I'll probably cast on for the first one tonight.

I think I also mentioned a couple of additional fallings-down from last weekend's fiber adventure. Both of them happened at the Carolina Homespun booth, which was amazing, not only for what it contained (an insane amount of wonderful stuff), but also because that's where I ran into Beverly, who'd mentioned in the comments that she'd be at Lambtown, and that she might say hi if she recognized me and it didn't seem too stalker-y. Well, I (serendipitously and entirely accidentally) saved her from that by accosting her as a complete stranger over the spindles to ask what she thought of them (apparently I have no shame when it comes to figuring out how someone could spin on those spindles that look more like nostepinnes to me than spindles). I should mention here that Beverly is a class-A enabler, too; as I dithered over the silk that I showed off in the last post, she stuck her head in that booth to tell me she'd bought one of their batts and that it was really wonderful. I committed to the silk very soon thereafter. It was nice to meet you, Beverly!

So, at Carolina Homespun, I bought myself this: 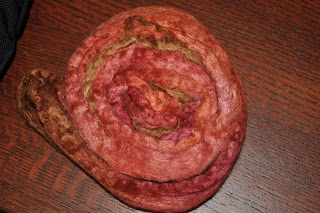 Silk/cashmere, in the colorway Persimmon. I kept walking up to it and picking it up, so I figured I should probably just commit. Doesn't it just scream "fall"? This may be the next thing to go on my wheel (although I confess that it feels too decadent to spin for some reason; I need to get over that feeling that I'm not good enough of a spinner for things like this).

The other purchase was one that my mom made. I have long been considering getting one of these "for the girls". Recognizing that "for the girls" really meant "for me and the girls", I have held off (no new fiber sports, right?). I showed it to mom and told her that I'd thought about getting them one for Christmas, and she said maybe she could do that. We chatted back and forth about it, until one of the weavers from the sheep to shawl competition heard us and told us how much she loves rigid heddle looms, that that's all she uses, and that this little one is a great one to start with and to do small projects with. That plus pointing out a few of the beautiful woven (as opposed to knit) scarves running around the fair pretty much did it. When I checked out with the fiber, mom checked out with the loom. (Thanks, mom!) I'm about halfway through warping it for the first time, and will probably finish that job this weekend and set the girls loose on it. Meanwhile, I'm contemplating what fiber in my stash might do well for weaving...
Posted by Knitting Linguist at 4:28 PM

Isn't it funny about age? I really had entirely different expectations of age than reality has borne out. Good thing I didn't know that then!

Regarding that spindle that looks like a nostepinne.... instead of performing a graceful "spin, draft" like the videos, my version is "spin, draft, grab-the-falling-Russian-spindle". I am forcing myself to follow my own advice: stop to rest after 15 minutes. I WILL get the hang of it!
Beverly near Yosemite

It might morph into different forms, but hooked is hooked.

The big difference between doing drugs and doing fiber is that after you do the fiber you have yarn or a hat or cloth...

I don't think you could mess up that fiber. However it turns out, that's what it will want to be.

Alwen is cracking me up.

And your daughter had a somewhat gentler approach than mine - who stated to my MIL who expressed some concern over whether I could knit my stash in my lifetime, "No worries, Granny, when Mom dies, we're (she and her sister) are going to fight over her stash."

Looks like you won't have to worry about using all your fibre. The way you are going, you will have two more competing for it in no time.

That is funny. I love asking kids to guess how old I am. The range of ages is enormous. And I started weaving last year. It does eat up stash. The only downside is that it isn't as portable as knitting.

Funny! I've actually thought about how much running room I have ahead of me (knitting-wise) and am counting on about 45 more years give or take.

BTW, I'm waiting to see how that stunning BFL turns out!

I also think the persimmon roving is the most beautiful thing ever.

And you'll have to let me know about the loom. Those look really fun too . . .

You are making me so jealous with all that pretty fibre!

Gorgeous pesto-y yarn! I'm dying for one of those Cricket looms. All the gals in my knitting group took a weaving class at our LYS and bought looms. I really can't justify the cost right now...and I've promised myself once I get a firm handle on spinning, I'll reward myself with the loom. I have a little ways to go on that...just a little...as in "miles to go before I sleep". LOL!

You're going to love weaving! And that fiber is gorgeous (both the spun and the unspun).

It is so funny to me that all adults think that only old people knit, and then kids think that you get too old to knit. Glad to know you have a few years left in you. =)

Does the fact that 50 remains the old people age mark in my mind even after I passed it and still not feel old at all, say something about me?!?:)

I loved your story, thank you for sharing it.

Your yarn and batt both look lovely and of course you are a good enough spinner to spin this lovely, go for it!

Oh my code word is a name of a very famous Israeli rock group: mashina! :)

Weaving is very very different from knitting, in so many ways. There is no frogging.

That roving is *gorgeous*! And I love that you got to meet Beverly like that!

Your story reminds me of when my son was 6 & quite concerned that his grandmother was going to die. We talked about it for awhile & I discovered that it all boiled down to the fact that she had gray hair. He associated gray hair with age & age with dying. So I asked him how old he thought Grandma was. His answer? 21. I guess age is all relevant. And the older I get, the older 'old' gets.

One of my great-nephews announced when he was about 8 that he wanted to reire. His Granny and Papa are retired and I had retirement thrust upon me, and he thought we had agreeable lives. Sweet. When he was registering me on the Wii he asked me how old I am, and I said 39 and he keyed it in quite happily, so 39 it is.

My mom told my daughter she was 55 for 25 years...my daughter (and apparently everyone at church) believed her.

When the obit ran in the paper announcing my mother's death at 80, there were many many people stunned into silence.

I hope I age as well as she did, considering I hit 55 next year.
*wink*
LOVE the yarn you spun. The batt is very pretty and yes you are worthy to spin it for yourself.
Obviously.

That Carolina Homespun booth can be dangerous no matter where you find it!
(((Hugs)))

Still warping, huh? I am now weaving a nice bag fabric, instead of the scarf I meant to weave. Woops! Maybe I shouldn't have been so enthusiastic, beating the silk into submission.

ooh fun, I can't wait to see what you make with it!

I've started to wonder if I should make a will for my yarn, I can't decide if that's insane, practical, or simply an indication that I have way way WAY too much of it.

I just can't stand the thought that someone might GASP - DONATE it to goodwill or somewhere similar. What an odd thing to worry about, but nonetheless, there I am!

Hurray, you bought a loom!!! By now you've probably played with it a bit. Have no fear, you'll use up your spun stash much quicker with a loom, and yes, you can use it for warp as well as weft. :-)