Work is still a big ol' piece of crazy pie, and looks like it will be for a while. It is inspiring me to think quite a bit about fear, and the overcoming thereof, which I might post about at some point, if I can make all of my thoughts cohere on that topic.

In the meantime, I decided that the better part of valor, when all is nutty in multiple areas of my life, would be to simplify as much as possible in those places where I can, and to insist upon my right not to feel guilty, or like a failure, for doing so. (Note: I am the only one trying to deny me that right, so it's a rather internal sort of insistence.) Yesterday was one of those days with event piled upon event: two soccer games (the last in Older Daughter's season), a play to go to (a dear friend's daughter), and an evening fund-raiser for Younger Daughter and her classmates' trip to New York in the spring for the Montessori Model UN. They are going as delegates of Angola, and she had a little speech to give on the languages, festivals, and history of Angola (very little - a few sentences on each). I'm guessing that her teachers ended up regretting giving her the language bit as I took one look at it, gasped at the mistakes, and reworked it with her (without warning them, but come on! we all know I couldn't let that go). It was much better once it got fixed. (heh) In any case, everything went as smoothly as a day like that could go, and I cast on for another hat like the green one, this time in blue, for Younger Daughter.

In the wake of a few questions about it (for which, thanks!), I have decided to try my hand at writing out the pattern for it. I spent some time during the warm-ups for the first soccer game yesterday charting the cables, using the first hat as a model, then cast on to see if following my chart would get me a hat. I got through the set-up and into the first couple of cable rows before the games were over, and then wasn't able to pick it up again until last night, when Rick and I finally sat down to watch a movie. But somehow my third cable row didn't match the chart, and that's when I decided not to feel guilty, or like a failure, for putting it down and doing something easier for the moment. (She learns! It's a shallow learning curve, but there is progress.) I haven't picked it up yet today, but I think I know what happened, and it was just a matter of picking up too many stitches in one row.

Older Daughter wore hers last night, and I admit to being really rather disgustingly happy with the way it turned out. 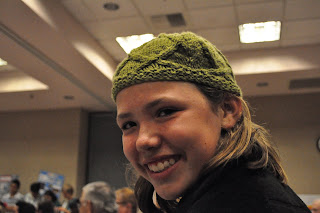 It's a little askew there (she'd just been accosted by many small children wanting to buy raffle tickets). 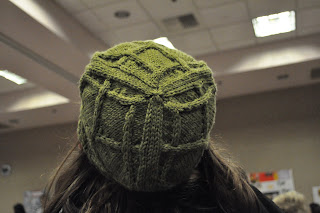 It reminds me a little of the stonework in a cloisters, 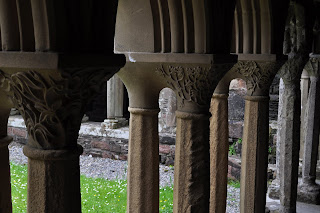 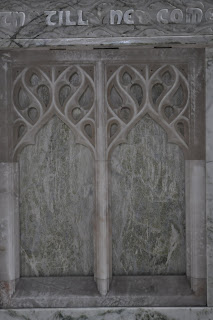 or of old arches. 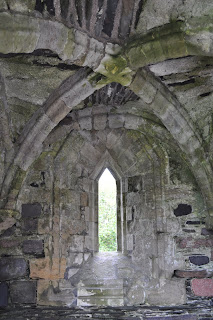 In any case, I'll keep working on it when my brain can handle it. I need to figure out how to chart it (outside of my notebook). Anyone know any good charting software that won't break the bank? I suppose Excel is an option, right?

Meanwhile, today was spent here at home, knitting Bel Air, and reading a book. Just what the doctor ordered.
Posted by Knitting Linguist at 5:07 PM

Marnie MacLean has a series of tutorials in using Excel for charting here. Not sure if this will meet your needs, but it's free! :)

Brilliant cabling! I especially like the 'arches'. I'm glad to know that I am not the only person who battles the 'failure' bit. You did a wise thing--when all else is in chaos, knit something simple.

I haven't used this, but read good things about it, and it's fairly inexpensive http://intwinedstudio.com/
Hat looks great, but trying to figure stuff out when you are stressed and swamped for me,at least, is counterproductive.

I think that seems to be the hardest thing to achieve, not feeling guilty when we take things a little easier.
The hat looks even better on, the pattern is fabulous

hey! I just found this and thought of your charting request:

I'd totally use Excel for this. That's what I use now when I'm futzing around with charts.

I tell my students that space when one walks away is important fermentation time - well done to leave it to tumble in your mind. Love the comparison with the photos and cables

If you ever get the pattern charted I'd love to buy a copy - it's a fabulous design!!! ;)

My admiration for pattern writers went up 100 points when I tried writing up a hat pattern last fall. Knit 4 consecutive successful hats (to get the pattern firm in my brain and know it worked for toddlers and adults)but the written/charted pattern was too daunting.

Would love the butternut tart recipe!

I've been trying to simplify the laundry, right into huge piles. Pattern will wait. (laundry doesn't wait as long as I wish it would)

I can't decide which I'm more enamoured of: the hat or its inspiration.

Baby steps. Good for you.

The Fear Factor is crazy. I had no idea I was so - tied up in knots.

Sounds like you deserve that down time! I've been in all-stockinette mode for a year now, for that very reason; just not enough brain cells to make the hard stuff fun. I'm sure you'll find time soon to get back to it, and you'll be glad for the break. The hat looks great!

I'm sorry for the fear factor; whether your own or someone else's, it's never fun to deal with. Good luck!

Thanks for the inspiration photos. The hat indeed reminds one of all of them.

But the best part is the smile on Daughter's face.