The mid-winter holidays have always seemed to me to be a time of making: making food, making presents, making memories, making light in the dark days. This past week has certainly been no exception.

Years ago, when Rick and I finally had a house together, and his Grandmom was feeling a bit overwhelmed by hosting his family's traditional Christmas eve gathering, I started doing it, with her, and then on my own. I didn't do it last year, feeling worn out by a bad autumn and too much to do, and as much as I think it was probably a wise decision, we all missed it. So this year I did it again. We had about 30 or so people over, and I spent most of Thursday and Friday morning getting ready. We make pickled herring (that's Rick's job), which is served with boiled potatoes and aqa vite, then ham and havarti and pickled cucumber salad, and red cabbage and hard bread and pork pies (my addition, in place of the Swedish meatballs that so tormented me for years - I don't enjoy making meatballs, but pork pies were our traditional pre-midnight Mass Christmas eve meal during my childhood, so I substituted). Dessert is butter cookies and rod grod and whipped cream (the kids love it). And Rick makes mulled wine. Mmm... The girls love it, and look forward to it all year - this year they even ate a little bit of the pickled herring. 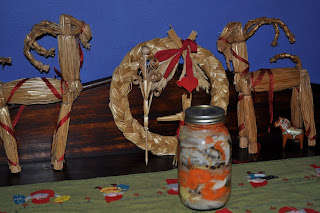 As I cooked, wearing Grandmom's apron that she gave me when she officially stopped doing this party herself, I found myself missing her terribly, while being grateful at the same time for all of the memories I have of standing in her kitchen making this same food. I hope my girls, and maybe, depending on the way things go, their kids, feel the same way about making this meal themselves someday.

I also made my usual two huge braids of yeasted cardamom bread for Christmas morning. I didn't take pictures, though (sigh). And on Christmas day, I made fresh baguettes and duck and sausage stew with sage and potatoes and celery root. That is our very own Christmas tradition. And then on Sunday, I cooked not a thing - we have enough leftovers for a while, I think.

Other making happened, too. Of particular note is the fact that Older Daughter this morning presented her very first finished knitted garment ever. (I suspect her of turning on her light in the middle of the night to read and finish it; we've all wanted to do that at some time or another, haven't we?) 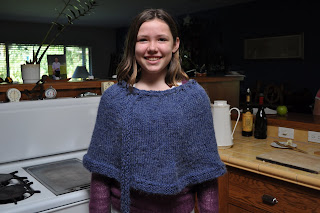 How about that? I'm so impressed, and now that she's actually finished an actual garment, I think there'll be no stopping her. Maybe she needs her own Rav page?

I, too, finished something. 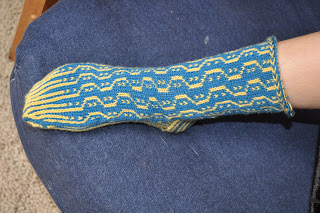 There's the first Silk Road sock; the second is at the heel flap. 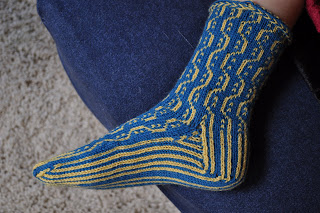 (The colors are more accurate in the second picture.) The second sock is turning out just fine, following my notes for the first one (this is not always the case), and I am 99% sure that I have figured out how to size it up with another four repeats and to still get the nifty lines on the heel and down the foot. 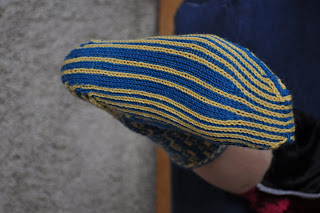 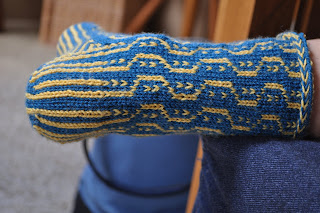 The only thing that's stopped me from finishing the second one is the fact that I've also been working away madly at the Tibetan Clouds stole; I'm halfway done with the second side panel now, and with the end in sight, suddenly I'm over the whole process knitting mentality, and into full-fledged product mode. I want it, and I want it now. But I also kind of want the second of these socks. 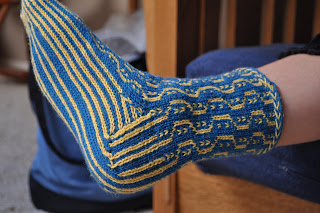 While my knitting dukes it out in the den, I wish all of you a happy holiday season, and a peaceful week as we head into the new year.
Posted by Knitting Linguist at 12:25 PM

Fantastic socks!
Congratulations to your oldest daughter for modeling her very FIRST FINISHED OBJECT!!!
Happy Holidays, and thanks for your blog.

Gorgeous knitting all around, your amazing daughter's work and those so-charming socks. I love the lines on the sole too.

I hope you get to relax now, I really do.

Those socks are magnificent!

Sounds like a fantastic holiday - and love the socks!

Congrats to older daughter! Your sock is awesome.

You cooked up a storm! Made me exhausted just reading about all the food you prepared and served to 30. You earned a few days off from the kitchen.

Those socks are too cool! Must knit some.

This post took me back to memories of Christmas Eve parties, making my grandmother's banana bread and my Great Great Aunt's cookies, and lots of little traditions. What an awesome thing that Older Daughter is right in there making stuff too...and it looks lovely! You bet she should have her own Rav ID!

And don't get me started on the socks...way cool!

What struck me most was the pork pie--tourtiere is traditional at my house, although I usually make it for New year's Eve and Day. I use my mother's recipe, which is basically her mom's recipe--don't know if the daughters will carry on the tradition, but at least they know how to do it!

My DH is the cook, and he spent last week making strucla makowa (poppyseed roll), piernik (honey bread), and prepping the seafood for the huge vat of chowder he makes for Christmas Eve. Me, I just made apple dumplings the morning of, and I'm still tired days later!

Congrats to Older Daughter on her first FO! Great job!

And yes, that is a whole lotta making of food. Wow! Bon appetit :)

Those socks are amazing!

Well done to your daughter. You'll be having some competition now over who gets what yarn, lol. Great to have something you can enjoy doing together

Congrats to Older Daughter! A garment is an achievement!

I like the socks lots too. It makes me want to pick up my abandoned fair isle socks . . .

Also, congrats on all the cooking. My holiday has been light on cooking and making this year, as I have been getting married and going to Colorado instead. It sounds like a great holiday, though, so enjoy!

Love the socks and congratulations to your daughter (and you too, Mom!)

The holidays are wall tied up with cooking for me, too. I love that you have your Grandmom's apron - that will be precious forever.

Congratulations to your eldest on her lovely stole. She did a marvelous job, and that is a lot of knitting. She should be as proud as you obviously are!

I'm chuckling over the knitting fisticuffs. Just so no one bleeds on anyone else...

Pork pie as in tourtiere? Yum. I make a pasta with a tuna tomato sauce, pretty low key. My christmas eve dinner has gotten much smaller over the years. The socks look great and how proud you must be of that First FO. Ravelry page for sure! Best wishes for 2011.

We were just talking this morning about the need to infuse a little more tradition into the holiday season; it's something that isn't always fully appreciated when it's there, but is often missed when it's gone. Keep making those memories!

Congratulations to Older Daughter on the shawl! You're right; there will be no stopping her now.

Your socks are beautiful. I love how all of the details work together so seamlessly. Might just make me rethink my policy of socks as mindless knitting. =)