I want to thank everyone for their thoughtful comments on my last post.  So many comments just reiterated the point that I was hoping to make: this isn't about political party - there is more than enough incivility to go around.  No group of people is innocent of its vitriolic members.  Alas.  But I can't help but think that speaking out for civility is worth doing.  As a linguist, I have lectured to my students about the difference between freedom of speech and hate speech; I have talked to them about how absolutely, fundamentally necessary it is to insist upon free speech, upon the right of every human being to speak their mind without fear.  Hate speech is not free speech - hate speech makes freedom of speech impossible to practice.  It shuts free speech down by creating fear and hate.  So, as a person who has always stood, passionately and publicly, for freedom of speech, I also stand for civility in the practice of that freedom, so that it is a freedom that we all can enjoy - even, and perhaps especially, people who think differently than I do.

One of the best things about reading everyone's comments was seeing yet again how really diverse everyone who comments here is, in politics, region, race, and religion (just to name a few).  And yet, here we all are, commenting civilly and supportively (whether or not we're in agreement about any particular thing), brought together only by a shared interest in fiber and the manipulation thereof.  It makes me wonder if, as a second act to the knitting of hats, we shouldn't descend upon the capitol with fiber and our fiber manipulation implements of choice, to teach our representatives to knit, crochet, spin, weave, whatever it is we know how to do best - wouldn't you want to be a fly on the wall to hear the conversations that might take place then?  You may say I'm dreamer...

A few other things came together this past weekend as well.  On Friday afternoon, knowing that our girls were going to a school Parents' Night Out (fundraiser for Younger Daughter's class), Rick and I were dithering about what to do with our sudden spare time when a dear friend called to tell me that she was sure it was too late and too much but she suddenly couldn't use her tickets to the Kodo drummers, and did we want them?  Why, yes!  Yes, we do!  And off we went.  It was unreal.  Like standing in the middle of a crashing wave.  I don't know what to say except that if you ever get a chance to go, grab it and don't look back.

Then, on Saturday, Rick took the kids and that same dear friend's son and went to see the naval airshow down in San Diego.  They had an absolutely wonderful time, and I got five hours alone to do laundry, clean the house, and then (as my reward) spin and knit.  As part of my commitment to myself to spin at least two ounces of fiber a month, I sat down first to spin the superwash BFL from Sincere Sheep that I bought at the Dixon fiber festival last fall. 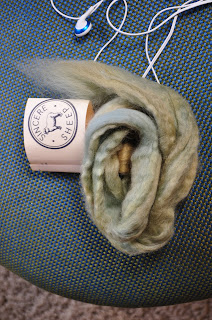 I split the four ounces into three equal bumps, and am spinning them worsted, with the goal of making myself a pair of socks from the results. 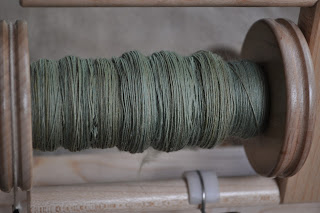 Much as I love woollen spinning (which, for me, is rather like petting kittens, in that it is great fun and has variable results depending on many factors apparently beyond my control or ken - things might go smoothly, or I might end up with fur everywhere - who knows?), it is nice to go back to worsted spinning - it appeals to the control freak in me.  Hello, my name is Jocelyn, and I know where my twist is.  Heh.

I am also plugging away on the sweater for my mom. I can't remember if I posted the starter picture of the first half of the front? 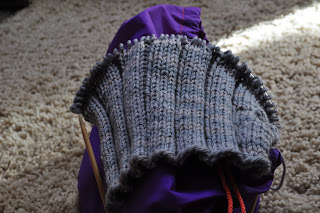 There it is again.  I am now done with that half, and almost done with the second half of the front (I should be able to finish that tonight).  I need to get another hat knitted, and then I can cast on for the back.  I am still very happy with the general squishiness factor of the yarn.  I am also, being me, a bit worried about the size.  I have knitted my gauge swatch, I got the measurements from my mom, but I'm going to fret about it until it's on her body and it fits.  Am I the only one who seems to think that fretting is a crucial part of garment creation?

I'm also working away on the yarn from the first RSC shipment of the year (warning - SPOILER).  Much as I loved the two patterns that came with this shipment (if you're interested, you can pop onto the Rav thread - there are pictures), they were both stranded colorwork knitted in mediumweight sock yarn (quite thick), and while I actually cast on to start a pair, I knew in my heart of hearts that I'd never wear them here in sunny SoCal, so I frogged them.  I decided instead that this is the perfect yarn to finally knit myself a Daybreak Shawl, and I have cast on and am working my way through the first, solid colored, section.  This will be a slow, long-term knit, to be picked up when I go to a meeting or am reading a book.  Lots and lots and lots of stockinette.  I don't have a picture of what's been knitted, but here are the two yarns together; I am delighted beyond words with these colors. 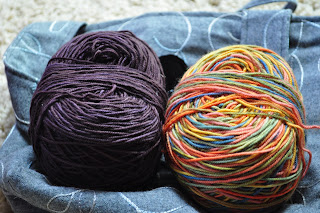 I will be wearing this one a lot once it's done, I think.
Posted by Knitting Linguist at 5:02 PM

i LOVE the kodo drummers!! i'll bet you had a wonderful evening, i know the body feeling of that. and i think we really need to be thinking much bigger than our representatives (though of course that's a good starting point): people in the media need to become fiber artists. that'll be our second wave. then let's move outward to everyone else.

Oh no, you're not the only one who spends inordinate amounts of time fretting over gauge and size. I have a long history of messing up sizing and therefore I fret until I either finish the garment and it looks good or I frog it and start over. Usually it's more of the latter, hence the fretting.

You always choose the most wonderful colors--rich and vibrant!

I too worry about sizing!

I'm mad for that purple in the last photo.
But you knew I would be, right?
;)
Just give me the name and no one will get hurt - I'll buy it when it finally makes it to the website - a year or more from now.
lololol
(((hugs)))

Fretting is essential to the success of many things. That's my story, and I'm sticking to it.

(love the colors of your baby Daybreak)

That green yarn is amazing! Personally, I think if we taught all of the politicians in Washington to knit and spin it would be far preferable to the "spinning" they do on their own. LOL!

I've been thinking of knitting Daybreak. Have some Rowan Felted Tweed in a few colors that might be asking to become that shawl.

Isn't it nice when things just come together of their own accord? There's nothing wrong with dreaming, especially when it involves civility and more people knitting. Perhaps someday...

Your new yarns are beautiful; they're going to make a great shawl. But the spinning is really what has me drooling. I love the colors in that fiber! Those will be some nice socks, for sure.

You must PROMISE to make Daybreak a long-term knit. It is in my queue, too, and I may have to go cast on just to keep up with you. But there is that one more hat to knit...

And I agree with Erica - the spinning really made me happy. I finally have a stash of plastic bobbins so am going to start work on my love - woolen sweater yarn - but I will enjoy watching your socks come into being.

Finally, what a rich (and civil) conversation we are all having. Thanks for being part of it!

Unexpected Kodo Drummer tickets sound amazing. I've seen them a couple of times when they came to Michigan.

That shawl will be lovely. I'm so glad you got to see the Kodo Drummers. I know that was fantastic.