Mail, and some thoughts

So, since my knitting is not all that interesting (look! another hat!  look! a second sleeve!), I thought I'd share some of the lovely things that have arrived in the mail lately. (Warning, Illuminations Sock club SPOILER.)  As a quick update, though, the second sleeve is finished, the pieces of the sweater are blocked, and all that's left is seaming and knitting the collar.  I have one more hat to knit, too; when Ellen posted on Rav this morning that we've got almost the entire Senate hatted, I figured I could do a bit extra to get us all the way there, right?  In light of the fact that public discourse continues in its trend of calling for violence against people exercising their right to free speech (in this case directed against union supporters), I think the hats and their call for civil discourse are more critical than ever.

So, first up was a lovely surprise from Erica, she of the DesigKnit blog which I so enjoy reading.  Erica began experimenting with dyeing a while ago, to my great delight (because it meant that I could live vicariously through her; her weaving adventures serve the same purpose for me), and she has now, to my great delight, started an etsy shop!  The colors that she's working on are just lovely (I have my eye on a couple of those rovings) - I don't think that there's a one that I wouldn't knit or spin.  If you look at this post, as well as in the shop, you can see the results of her experiments with shaded depths in her colors.  You could also look right here: 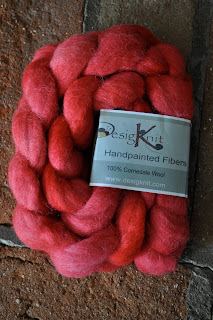 Isn't that lovely?  I had some terrible trouble capturing the colors - they're very rich, and the range is amazing.  Erica may have gotten it better in the first picture in this post.  See what you think.  In any case, I am so looking forward to spinning this lovely Corriedale - I think I may have found the fiber that will go on my wheel for my March spinning - thank you, Erica!

Also on the fiber front, I inadvertently hopped onto a bandwagon that I didn't realize was in existence.  Towards the end of January, as I was poking about my fiber stash looking for my next spinning project, I happened upon a little baggie of silk hankie that I'd bought some time ago (in Ohio, maybe?), and remembered reading about Ellen's experiment with spinning silk hankies.  A little poking around on Knitty later, I had a plan.  I decided to knit them unspun, which turned out to be much more fun than I thought it would be, actually, and I was working out what I should knit, when the Yarn Harlot posted about her lovely silk hankie mittens (on my birthday, actually - I can't seem to link, but if you look at her February 2 post, you'll see them).  In that post, she happened to mention how many grams of silk hankie it took to do that - to wit, 30g.  I had 9g.  It occurred to me, then, that I wasn't going to get very far with 9g (alas), and that I'd better do something about it.  What didn't occur to me was that ordering silk hankies from BMFA right after the Yarn Harlot had posted about silk hankies from BMFA was going to be rather like hopping on the freeway in LA after someone's announced an imminent tsunami.  Crowded.

But they have arrived, and I love them.  It's only 20g, but I think I can do what I want with that (fingerless mitts), and I'm dying to get to it. 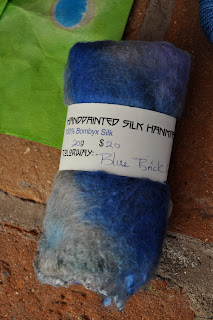 That's the Blue Brick Wall colorway, and I just love it.  I also love that if the mitts turn out and I want to knit a hat to go with, I could get some yarn dyed up in the same colorway to do that.  Very cool.  See that hint of purple at the top right?  So pretty...

Last but not least, I got my Illuminations Sock club package! (Here comes that spoiler!)  I was very excited about this - I signed up for two sock clubs this year, the Rockin' Sock Club, and the Illuminations Club - the point of the latter was to kind of kick me into colorwork gear in a nice sort of way.  Which made it very entertaining that the first RSC kit was colorwork (not to mention all the freaking out that engendered on the discussion list - many people feared that it was a sign that the whole year would be colorwork).  Nevertheless, RSC won't be socks, so I was very much looking forward to seeing whether I'd want this kit to be socks or not. 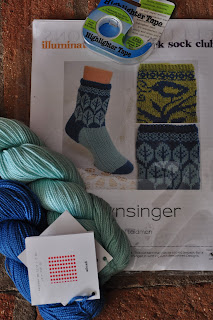 Look how pretty!  These are absolutely my colors (the colorway option I chose for this club was "surprise me" - and I am so happily surprised here!), and I love both the patterns, but think I will do the leaf one.  I have never tried Shibui, which is what this yarn is, and it has silk in it!  Silk!  We all know how I feel about silk.  Mmmm....

So, all in all a week of good packages, don't you think?
Posted by Knitting Linguist at 4:42 PM

Wow! You have really really scored on the fiber in the mail arena! Silk anything sounds absolutely heavenly.

It's hard to feel down when you get happy mail like that!

It was almost as much fun reading about these mailbox surprises as it must have been getting them. Almost. :-)

Wow, that DesigKnit silk is gorgeous.

Fun! I have some hats for the homeless that I haven't given away yet. But instead of the Senate, maybe I'll drive down to Madison and hand them out to the protesters!

Those are some great packages! Maybe the Yarn Harlot is why my yarn took so long to ship...I was surprised that it took them that much longer than usual. Crowded, indeed.

I'm glad you like the roving! I just hope it doesn't turn your hands colors while you spin. We'll consider this a test case to see if I'm just too much of a perfectionist. (Who, me?)

Wow. Lots of lovely but that Shibui is gorgeous (as is the pattern, and your choice of it)
;)
Off to knit on my 4th WHNHH hat.
(((hugs)))

My little cocoons just came in the mail today and I'm so excited to try making mittens with them! I can't wait to read about how yours turn out. That colorway is just gorgeous...

You have a lot of good goodies there! I love the red roving. :-)

Such lovely colors to look at on a rainy day, I am cheered, thank you for that!

I just looked up the illuminations club and there is an option to do the club without the yarn, JUST the patterns. I am seriously tempted. Seriously.